Key questions addressed in this article:

The Today newspaper reported that during the debate on the White Paper on Population in Parliament, NTUC’s Deputy Secretary General and Senior Minister of State in the Prime Minister’s Office, Heng Chee How, had “described (the older worker segment of the workforce) as an untapped one, and urged the tripartite partners to start working on further extending the re-employment age limit from 65 years old to 67 years old. He said that the limit of age 67 is already provided under the law, so there is no need for further legislation, but there is a need to ensure smooth implementation of the re-employment or people aged 62 to 65 and consider how best to facilitate further extension sooner rather than later.”

Today also reported that, “Mr Heng said a key part of this would be to ensure that employers in both the private and public sector value their older workers as assets, pay them fairly even as they enter re-employment and not make mechanical cuts to their pay and benefits.”

In this article, I will discuss the older workers as those aged 50 and above, because I wasn’t able to locate statistics of older workers, by further stratified age differentiation.

If you look at Chart 1, you will see that older workers are employed at a higher proportion for the following industries:

If you want to find out how these occupations are classified, you can refer to this link.

For a clearer picture, you can look at Chart 2. In this chart, you can see that the older workers are clearly over-represented in the occupations which you would classify as ‘blue-collar’ or menial jobs. 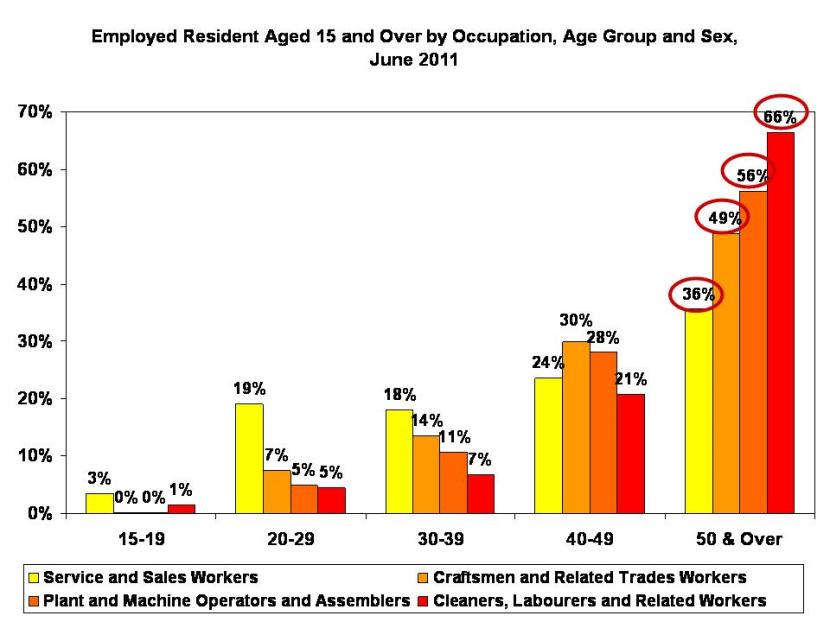 I would like to understand from Mr Heng how the government hopes that companies will “value” our older workers as “assets” when they are employed in ‘blue-collar’ and ‘menial’ jobs? To be clear, in other countries, ‘blue-collar’ jobs are not necessarily discriminated upon. For example, construction workers in Australia can earn $3,000 or $4,000 and are considered professionals.

However, if you look further into the statistics, you would see that 93.1% of them work full time jobs (Chart 4).

What is upsetting though is that the older workers are also the workers who work the longest hours. According to Chart 5, older workers work 49.5 hours every week!

Again, I ask of Mr Heng, is this how we “value” our older workers?

Finally, let me show you one last statistic which will put a nail in the coffin to the Mr Heng’s claim of how he believes that older workers should be “valued”. 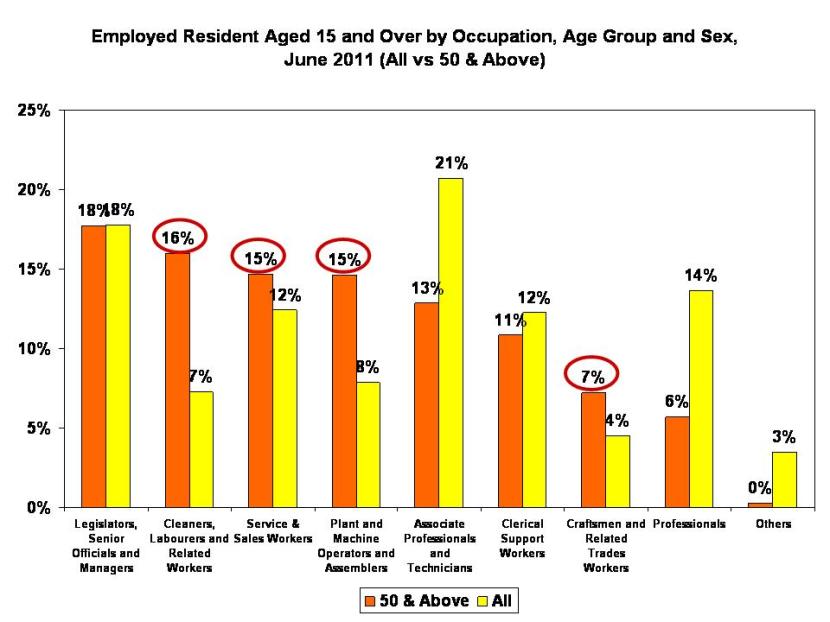 Will Mr Heng be willing to clean our tables if he has to earn $1,000 every month?

As Mr Zaqy Mohamed had also said that, “on the wages benchmark, we should be conscious of how real wages move in line with inflation and cost of living indices.”

Very clearly and this is something that the government has acknowledged themselves as well, the wages of the lowest wage earners have not been increasing with inflation, which means that their real wages have been dropping. According the the National Wage Council, “while workers in general have seen an increase in real incomes over the last 10 years, the income growth of low-wage workers have lagged the rest of the workforce.” According to Mr Leong Sze Hian, he “estimate(s) that the wages of cleaners and service workers have declined by about minus 33 and minus 2 per cent, respectively, in the last decade or so.” Our older workers are not paid fair wages and they are not treated fairly, having to work in menial jobs and work long hours.

According to Mr Heng, he had “urged the tripartite partners to start working on further extending the re-employment age limit from 65 years old to 67 years old,” so that we can employ more older workers to work in Singapore. Which means that he wants to free up more older people to work in the menial jobs in Singapore, so that they can be subjected unfair wage conditions and unfair treatment.

The question you have to ask is this – why are we asking our older workers to keep working? It’s an oft-repeated line by the government which they say that from what they gather, the older people want to remain active and so, they want to be able to work. In South Korea, the older people also want to remain active, and which is why, every weekend, they put on their sporting gear and they go to the hills and mountains to trek, at their own leisurely pace.

Now, you tell me, who in their right mind would so much yearn to remain active so much so that they can’t wait to work at a food court to be a cleaner, to clear the tables and to wipe after the mess that we make after we eat? Now, you tell me, who in their right mind would want to spend 49 hours every week, working longer hours than most people, having to touch other people’s saliva and spit and to handle their utensils? Would you? When our government keeps saying that our older workers want to keep active, do they mean our older workers want to spend their time, standing day in, day out in inside the toilets, cleaning up after people who do not know how to pee or shit properly, and who have to manually use their hands to clean the toilets?

Mr Heng, would you want to clean up after someone else’s shit? Mr Lee Hsien Loong, would you want to hose the shit off in the toilet every other day, because people simply do not have the basic courtesy to pee or shit properly, not helped by the stressful lives they lead? I simply cannot imagine how our government is unable to empathise with our older workers.

Look, why do the older people in Singapore have to keep working?

Because our government has learnt to value people as workers and to pay them according to an economic value that the government has chosen to determine by, the older workers are put into jobs which treats them the least fairly in Singapore. Where is the heart, my government? Do you not remember these people who had supported you and worked with you to build Singapore when Singapore was trying to find its footing in the world?

But what could the solution be?

Once we are able to pay our low wage workers a fair wage, when they grow old, they wouldn’t have to be forced to work in ‘menial’ jobs. If the government is indeed sincere that we should keep our older people active, then when they are older, they older people should be able to take a walk in the parks, do volunteer work and take up hobbies and join activities that they are interested in. If they are paid fair wages, they would have enough to use at their old age while they continue to remain active. Also, if they had been paid fair wages, they would be able to continue to spend and consume, and help create growth for our economy.

Now, this is very easy to understand and something that you would do, if you want to have a fair and basic standard of living, right?

As I have said many times, the government will not do this. Why? The government’s governing principles are aligned towards profit-making maximisation. They simply will not increase the wages of low wage workers and older workers to one that will accord them a basic standard of living, because the government believes that this will eat into their profits. The government isn’t interested in having any spare Singaporean who is not working. As long as you can work, we will find a way to make you work so that you can be another statistic to help grow the economy. At the same time, the low wages that they are paying you and they low amounts that you are able to withdraw from the CPF – your money which the government has locked up – means that you are forced to continue to work, even at your old age, because the government has systematically develop a structure which ties the hands of the older workers, such that damned if you do, and damned if you don’t.

Look, this is simply not right. It is simply not right to not treat people right. There is no way else I can say this. PM Lee had said today that, “We are worried about population … we want to make sure elderly Singaporeans are taken care of.” PM Lee, just paying lip service won’t do. PAP, you should be ashamed of yourself! But so what right? They are earning enough money to laugh all the way to the bank. So, what is a few hundred thousand people who do not get paid fair wages and are treated unequally when we have a few hundred dollars go into our bank regularly?