In the Today newspaper today, it was reported that the current way that Singapore computes the Gini coefficient (which is a measure of income inequality) is “based on household income from work per household member, as Singapore, Hong Kong and Japan do.”

According to Today, “some countries compute their Gini coefficients based on … the “square root scale” (used in some OECD reports), which “take into account that households may enjoy economies of scale when sharing resources among household members”.

According to the current way, “Singapore’s Gini coefficient of 0.478 last year, before accounting for Government transfers and taxes, is on a per-household-member basis.” According to the “modified OECD scale” Singapore’s Gini coefficient is “0.435 if the square root scale is used” and would be 0.414 after Government transfers and taxes.

All fine and well, right? If Singapore’s Gini coefficient is adjusted downwards based on a different scale, it looks like Singapore’s income inequality is actually not that high, right?

Not really. What the Key Household Income Trends 2012 report doesn’t tell you that even if we use OECD’s scale to compute Singapore’s Gini coefficient, Singapore still has the highest income inequality, as compared to all the other developed economies in the OECD.

I had looked at the OECD Stats Extract and obtained the following statistics (of selected countries), in the chart below. 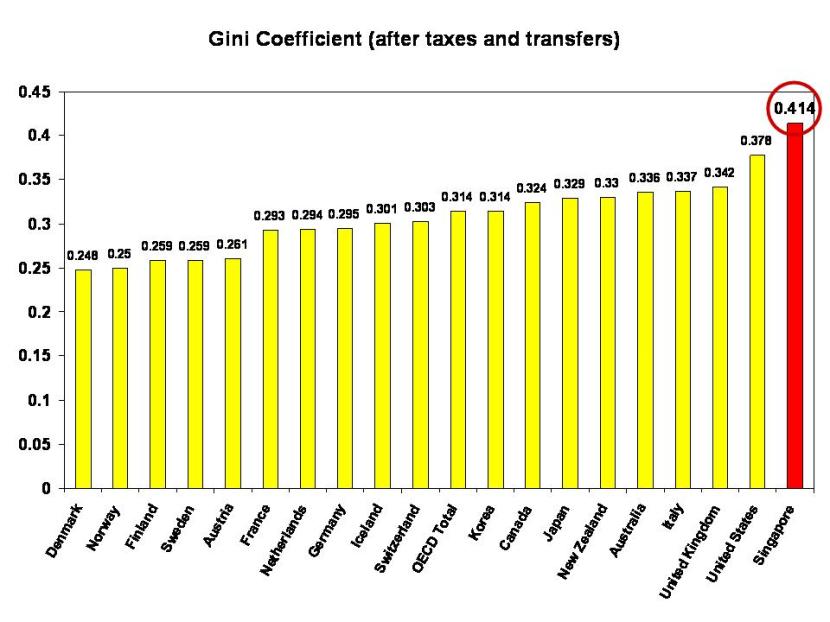 You can see that, clearly, Singapore’s income inequality is significantly higher than the other economically-developed countries in OCED.

According to the ‘An Overview of Growing Income Inequalities in OECD Countries: Main Findings’ report, “policy choices, regulations, and institutions can have a crucial impact (on income inequality). They can shape how globalisation and technological changes affect the distribution of income. They can also influence income distribution directly, e.g. through deregulation in product markets, changes in social transfers, wage-setting mechanisms, or workers’ bargaining power.”

According to the report, “Public cash transfers, as well as income taxes and social security contributions, played a major role in all OECD countries in reducing market-income inequality. Together, they were estimated to reduce inequality among the working-age population (measured by the Gini coefficient) by an average of about one-quarter across OECD countries. This redistributive effect was larger in the Nordic countries, Belgium and Germany, but well below average in Chile, Iceland, Korea, Switzerland and the United States.”

I had superimposed Singapore’s statistics into the chart below. You can see that even before government transfers and taxes, Singapore’s Gini coefficient is already much higher than most of the economically developed countries. Whereas all the countries in this chart were able to reduce their income inequalities significantly, with the exception of South Korea, Singapore wasn’t able to do so, or rather, the government isn’t willing to. South Korea did not adjust income inequality downwards but its income inequality is comparatively much lower, to begin with. 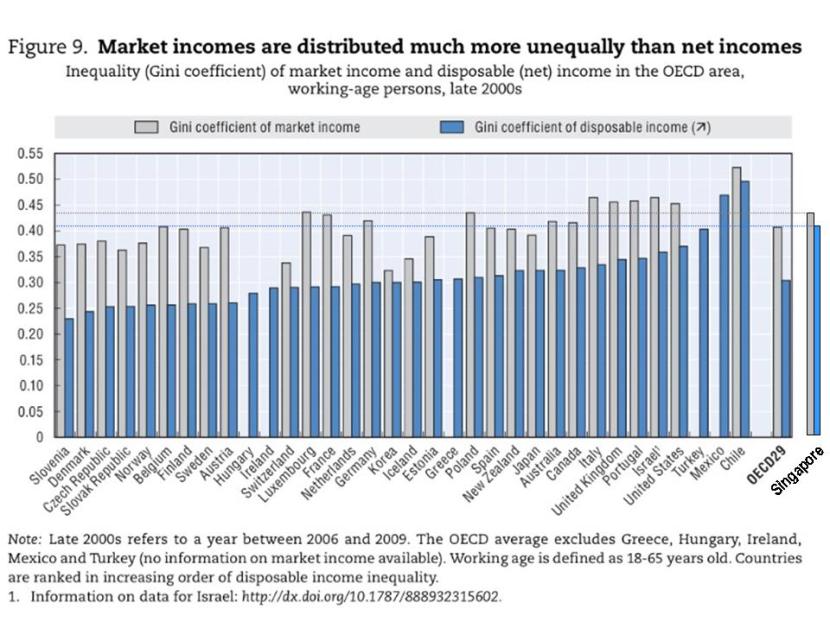 The often put out argument by the government is that Singapore’s taxes are low, and thus we are not able to afford to provide high social welfare spending. However, is this true?

The report by OECD clearly puts to myth the Singapore government’s argument. It states that, “Redistribution is not only about cash. Governments spend as much – some 13% of GDP – on public social services (education, health, care services, etc.) as they do on all cash benefits taken together. Some countries even spend much more on the provision of such “in-kind” services than on cash benefits: it is the case in the English-speaking and Nordic countries, Korea, and Mexico. While the prime objective of social services is not redistribution, but the provision of a decent education, basic health care, and acceptable living standards for all, they are in fact redistributive. Across OECD countries, they reduced income inequality by one-fifth on average and their share of GDP and redistributive impact remained constant over the 2000s.”

The report also warns that, “Rising income inequality creates economic, social and political challenges. It can stifle upward social mobility, making it harder for talented and hard-working people to get the rewards they deserve. Intergenerational earnings mobility is low in countries with high inequality such as Italy, the United Kingdom, and the United States, and much higher in the Nordic countries, where income is distributed more evenly. The resulting inequality of opportunity will inevitably impact economic performance as a whole, even if the relationship is not straightforward. Inequality also raises political challenges because it breeds social resentment and generates political instability. It can also fuel populist, protectionist, and anti-globalisation sentiments. People will no longer support open trade and free markets if they feel that they are losing out while a small group of winners is getting richer and richer. Reforming tax and benefit policies is the most direct and powerful instrument for increasing redistributive effects… Government transfers – both in cash and in-kind – have an important role to play in guaranteeing that low-income households do not fall further back in the income distribution.”

According to Mr Soon Sze Meng in the Today newspaper, “The Ministry of Finance’s intergenerational income mobility study, which measured 38,500 father-son pairs for sons born between 1968 and 1978, shows evidence of lessening mobility among the poor… (and) social cohesion will wear away when the poor believe they cannot work their way up.” Though the Ministry of Finance would beg to differ, by saying that, “The cohorts studied (those born between 1969 and 1978) in fact experienced relatively high mobility… (even as) there was some evidence of slightly lower mobility for sons of poor fathers.”

The recent protest against the population white paper needs to be understood in this light. Do Singaporeans understand what the long term implications are to sound economic policies for Singapore? I am sure we do, as our parents and grandparents for a large part of the nearly 50 years of Singapore’s modern day history. However, as the report had pointed out, the rising income and social inequality, fuelled as well by a flawed practice of meritocracy which favours the well-heeled over the poor, has resulted in “social resentment”, and gradually, “political instability”, as can be seen. Thus discussion about xenophobia has also arisen out of this context of being “protectionist” – the people are reacting to their inner insecurities about their own future, and unfortunately have misdirected their anger onto foreigners, even as they should direct it to the government and their flawed policies. Because of government policies which have favoured the rich in and who have come to Singapore, “while a small group of winners is getting richer and richer”, this has caused Singaporeans to feel that “they are losing out” and thus they are starting to believe that Singapore can “no longer support open trade and free markets”. And thus Singaporeans are disagreeing with the 6.9 million population projection figure, because of fears of how an open trade and free market economic system will do to their already worsening livelihood.

Protecting Our Poor, Elderly and Women to Reduce Income Inequality

As the report has stated, “A key challenge for policy, therefore, is to facilitate and encourage access to employment for under-represented groups, such as youths, older workers, women and migrants. This requires not only new jobs, but jobs that enable people to avoid and escape poverty. Recent trends towards higher rates of in-work poverty indicate that job quality has become a concern for a growing number of workers. Policy reforms that tackle inequalities in the labour market, such as those between standard and non-standard forms of employment, are needed to reduce income inequality.”

However, in Singapore, instead of enabling our older workers, women and migrants to acquire new jobs that enable them to escape poverty, they are forced to work on low wages. This has the resultant effect of depressing the wages of Singaporeans who work in jobs which pay similarly, and has thus trap a group of Singaporeans in a state of chronic poverty. There are abour 300,000 Singaporeans who earn less than $1,000 a month and about 450,000 who earn less than $1,500. We often hear of age discrimination where elderly workers are not employed when employers find out about their age or where mothers have their employment terminated because of their pregnancies. Employers also pay migrants low wages because migrants have very low bargaining power. Because of the low pay that employers give to them, this results in Singaporeans’ wages being pushed downwards, which means that the pay of the lower income workers are not commensurate to the cost of living in Singapore.

The clear solution is to ensure that Singapore implements a minimum wage law which protects these marginalised groups from earning unequal wages. It also means for the government and businesses to have a fundamental re-understanding of how these supposed ‘low-skilled’ industries can be restructured, so that with technological investment, these occupations can become more ‘high-skilled’ and the workers can earn higher wages. However, the government currently does not believe in investing in these industries and thus this group of people will continue to be disadvantaged by the system and be trapped in chronic poverty.

As can be seen in the chart below, Singapore is the only country among the developed Asian economies which does not have a minimum wage law, to date.

The Government Needs to Do The Right Thing

In the latest Key Household Income Trends 2012 report, the government decided to use new scales to compute the Gini coefficient, because they want Singaporeans to think that the income inequality in Singapore isn’t as bad as it seems, or even as we feel. The fact is that with the same amount of money, the people feel that they can buy less. They feel squeezed.

Yet, the government had wanted to put out a preposterous news article to try to confuse Singaporeans into thinking that the income and social inequality isn’t as bad as people think. How irresponsible! When you look at the other countries, these countries have much lower income inequalities, even before government taxes and transfers. Not only that, the government steps in further to further reduce the income inequalities significantly in many of these countries. Yet, our government has chosen to take a back seat and keep purporting about how their hands are tied because of the low taxes that the government is collecting.

In 2011, our personal income tax constitute only 13% of the revenue. The government has many other diversified funding sources, also through our CPF monies which they use for investment which accumulates high interests which are not channelled back. The government also earns substantial monies through their investments through Temasek Holdings and GIC. Is there more the government can do, even with their current state of finances, for the people? Certainly.

The question now is, if this government willing?

It is of no use and simply quite ridiculous to change a numerical statistic to try to make believe to people that our income inequality isn’t that bad, by whitewashing what the fact is, obviously. Instead of fudging the statistics, the government should instead start enacting policies, such as a minimum wage law and to channel more funding into our healthcare bills, where the government already forks out the lowest proportionate expenditure, as compared to other economically-developed countries.

This is the very least this government can do, or lose their already very damaging moral integrity, if there is any.