In light of the introduction of the new licensing framework for online news sites, I had also written an email to Deputy Prime Minister Tharman Shanmugaratnam to appeal.

I had also written an email to the Media Development Authority (MDA) yesterday and am awaiting their reply. 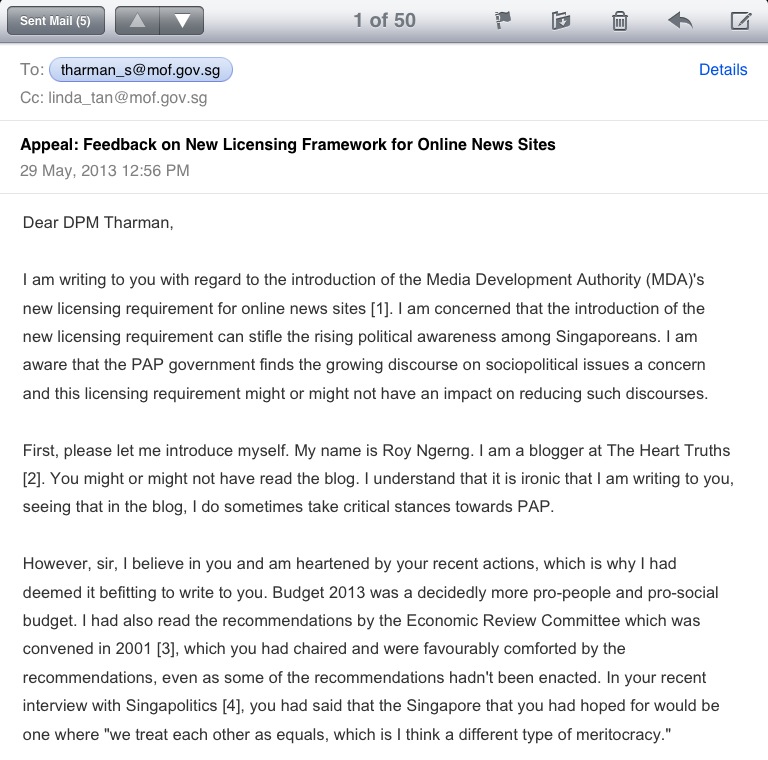 First, please let me introduce myself. My name is Roy Ngerng. I am a blogger at The Heart Truths [2]. You might or might not have read the blog. I understand that it is ironic that I am writing to you, seeing that in the blog, I do sometimes take critical stances towards PAP.

However, sir, I believe in you and am heartened by your recent actions, which is why I had deemed it befitting to write to you. Budget 2013 was a decidedly more pro-people and pro-social budget. I had also read the recommendations by the Economic Review Committee which was convened in 2001 [3], which you had chaired and were favourably comforted by the recommendations, even as some of the recommendations hadn’t been enacted. In your recent interview with Singapolitics [4], you had said that the Singapore that you had hoped for would be one where “we treat each other as equals, which is I think a different type of meritocracy.”

You had also said that, the PAP should “Bring up views from all quarters of society. Take them seriously. Help the thinking process take place on the part of citizens” and that “It’s a very risky situation and it’s also not what people want” that the PAP “remain a completely dominant player, dominating all discussions”.

Which is why, in light of this, that the introduction of the new licensing requirement by the MDA has not been as favourably viewed by a segment of Singaporeans. I am not privy to the decisions by the MDA and the PAP. But some of the on-ground sentiments are that the new licensing requirement is aimed at “curbing dissent among Singaporeans towards PAP”.

I understand that for the PAP, it can be frustrating that a segment of Singaporeans are critical of the PAP even as the “PAP MPs work very hard at it (and) They don’t always get credit for it.” There are many things that I appreciate about Singapore and of the PAP government – our safety and security, our infrastructure and the relative material comfort, among others.

However, if I may be allowed to, the current unhappiness that Singaporeans face is due to an increasing cost of living, which has been unmatched by a rise in wages and their retirement funds. It could thus be unsurprising that the drop in PAP’s vote share over the past 3 general elections can also be correlated to the decrease in the proportion of Singaporeans who had been able to meet their CPF and Medisave minimum sums, rising healthcare costs and income inequality. At the same time, it has been perceived that the government’s assistance towards the people had not been increasing – the CPF interest rate has remained at a constant and the government’s healthcare expenditure on our healthcare expenditure has remained low.

My intention of bringing this up is not to chastise the government, for how long and how far can we “blame” one another? It would be detrimental to the Singapore society and as you had mentioned, is a “risky situation” if we were to continue to do so.

There had been times in Singapore’s modern history that the PAP had seen increasing support among Singaporeans over consecutive general elections, in the 1970s and 1990s, where the PAP had garnered peaks of 77.7% of the vote share in 1980 and 75.3% in 2001, respectively. The decades in which the PAP had increasing vote share were also decades where the people’s wages were growing with economic growth and they were able to continue to contribute and live in balanced ways in Singapore. The felt that they could live their lives well.

My purpose of writing this email to you is to let you know how I, as well as some Singaporeans, feel. I believe that all Singaporeans are grateful to the PAP for transforming Singapore from a Third World to First World Economy in Singapore’s initial years. But in the past decade, we have felt the pangs of growth and have been trying hard to adjust to it. For some of us, we feel that our best recourse is to vote another political party into government so that this party could also represent some of our voices.  You see, DPM Tharman, we are simply worried about our own livelihoods.

In the report by the Censorship Review Committee 2010 [5], it had said that “Community engagement is essentially about bringing the views of citizens to bear on the development of public services. In this sense, it is about citizen empowerment.” The report had also said that, “Simply explained, engagement means that “government must transfer some of the ownership of and responsibility for solving complex issues and achieving societal goals back to the public – and the public must agree to take this on”.”

In recent years, many Singaporeans have gone onto the Internet because we would like to “take on” the “responsibility for solving complex issues and achieving societal goals”. Admittedly, as Singaporeans have only been learning to use this new-found voice over the past decade, our feedback online might not have been as cultivated. Similarly, the PAP government has been trying to suitably adjust to growing use of the Internet, and thus the introduction of the new licensing requirement.

You had also said at the interview with Singapolitics that, “We’re still in a phase where it is overwhelmingly critical of Government, not all, but overwhelmingly, and that I think it is understandable. You know, that’s the way it starts. And I think there are now more serious bloggers and some very thoughtful bloggers who have views of their own that are not just motivated by wanting to hit at the Government but they want to express their thoughts and they’re worth reading and listening to. Over time, hopefully, there will be a bit more of a debate, an even debate in the online media. We don’t have it yet but you can see it gradually emerging and that’s a situation that I think we want to come to. It is a plus that you have social media because a lot more people are involved in commenting and thinking about issues but it’s got to evolve further, so that it matures and you’ve got a more even-handed disposition.” These are wise words.

On behalf of a segment of Singaporeans, I would like to seek your understanding in this matter. For many of us Singaporeans, we are only beginning to realise the stake that we have in Singapore and how we need to take ownership and be empowered over our own lives. My own journey began only last year. We genuinely want to also shape a Singapore which belongs to us all. Many Singaporeans might sound “angry” online but I hope that you can understand that this is because we feel that we have finally regained our ability to speak up, after years of seeming inability to do so, and it would take some time for us to learn to use it more constructively, just as it would also take some time for a government which had not been used to feedback to also learn to adjust to receiving them. It is a two-way process.

You had said that, “So civil society is more active and people are just a lot more aware of issues and I think that’s been a positive.” I am heartened by your understanding. DPM Tharman, it is my sincere wish that the people in Singapore, be it whether we are the government or the common Singaporean, are able to come together to make Singapore work. We have done it for almost 50 years. And we can do it for another 50 – Singaporeans are here with you, if they know that the government can be trusted to care for them. I understand that the PAP wants to maintain its power and dominance and this is possible, but if the people believe that they can trust the PAP to remain concerned for all of Singapore.

There is a glimmer of hope and opportunity at this point where the government and the people can reach out to one another to establish a common understanding. This would require both sides to let go of their insecurities and be willing to put their heads together. DPM Tharman, I urge the government to engage netizens, even as they might be seen as “dissenters”. If we are able to iron out the distrust with have towards one another, this would allow us to turn the page and focus on developing Singapore in the new era. I urge the government to work with netizens to shape the discourse online towards more constructive and responsible expression, through an openness in the exchange of our ideas and in more thorough engagement.

I hope that the government will reconsider the introduction of the new licensing requirement for online news sites and instead, cater time for mutual engagement and understanding, so that we can shape discourse online to become one that would be beneficial for the intellectual growth of Singapore.

[3] Refocusing the CPF System for Enhanced Security in Retirement and Economic Flexibility http://www.mti.gov.sg/ResearchRoom/Documents/app.mti.gov.sg/data/pages/507/doc/3%20ERC_CPF.pdf

Leave a Reply to The Pariah Cancel reply