Did you hear what Vivian just said?

Take a look at the video at the link below. Listen to what our dear Vivian has to say at 2:35:

These were his exact words:

We are probably the only country that’s publishing 3-hourly rolling average PSI. If you look at PSIs in almost any other jurisdictions, it will be on a 24-hour average and the updating is not going to be at an hourly interval and published almost instantly as what we have now.

Does Vivian think that we are idiots?

This is Hong Kong:

This is Montreal, Canada: 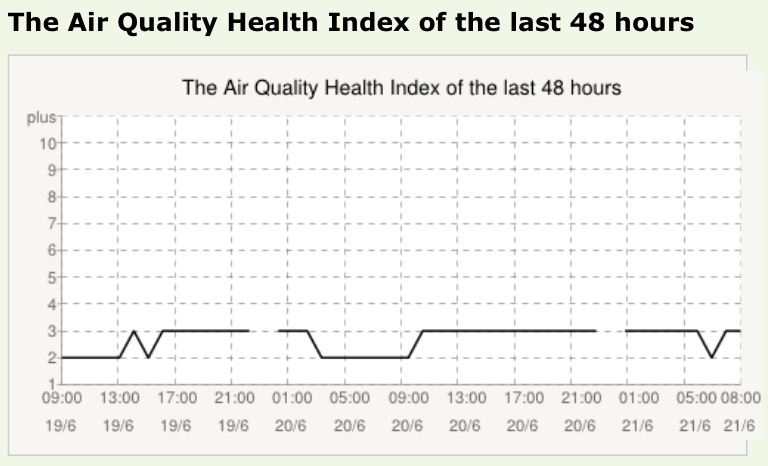 This is London, United Kingdom:

This is America/Canada – click on the link to see the real-time loop.

Do any of these look like 24-hour averages to you?

Do they not get published instantly?

What is Vivian talking about when he said that Singapore is “in almost any other jurisdictions, (the PSI reading) will be on a 24-hour average”?

Ok, so even if it’s a technicality and we should look at the PSI – which other country uses the PSI? Singapore and?

You see can at the two links below the other air quality indexes used by the other countries:

The only other country that uses the PSI index is Taiwan and even then, it also provides real-time data:

What “other jurisdictions” is Vivian talking about? Timbuktu? Even when just compared to Taiwan, what Vivian had said is a fallacy!

And if you look at air quality indexes as a whole, you can see that many of the countries provide hourly readings which are published at “hourly interval(s) and published almost instantly”.

Vivian, who are you trying to smoke? You think that with the haze, you can really haze our brains, is it? Is that it?

Apparently, Vivian isn’t the only funny person to say this. According to Channel NewsAsia, “Defence Minister and Chairman of the Haze Inter-Ministerial Committee Ng Eng Hen on Friday urged the public to refer to the 24-hour Pollutant Standards Index (PSI) reading rather than the three-hour reading.”

It also reported that, “He added that most studies on the exposure to pollutants are based on 24-hour measurements. That is why the government’s guidelines are also based on those measurements.”

Just last night, Acting Manpower Minister Tan Chuan-Jin also chimed in and said on his Facebook page that, ” We understand that the 3-hourly PSI readings can spike and cause much anxiety, but they fluctuate greatly during the day. It is the total exposure that the 24-hr readings provide that will matter most.” FYI, readings are supposed to spike! – this is much better an indication for the people as to what they should do, rather than a 24-hour reading which doesn’t give them clear instructions. Hello???

Is Vivian, Eng Hen and Chuan-Jin trying to pull a fast one? What other “jurisdictions”? What other “studies”? The indexes I have shown clearly publish hourly readings!

If I use the same logic and apply it to the weather – now in some countries, the temperature fluctuates severely throughout just one day – if I should be looking at the 24-hour temperature, I should be wearing a thick sweater for the whole day even if the weather becomes sweltering hot at some parts of the day or I should be wearing only singlets and shorts for the whole day even if it becomes freezing cold at night? Is that it?

That’s rubbish. Obviously, the weather doesn’t operate on human timelines – the weather fluctuates according to, well, mother nature! I hardly imagine the weather, or the haze for that matter, fluctuates based on our clock! It’s completely erroneous to expect us to monitor the haze on an 24-hour average basis!

The basic idea should be that we should wear our masks when we go outdoors, and when the haze hits a high level – on as immediate a basis as we can notice! It simply doesn’t make logical sense to decide whether to put on a mask based on the 24-hourly average.

Why The Government Wanted To Pull The Wool Over Our Eyes

By now, many of us would understand why Vivian and Eng Hen had made such illogical statements. In the past where there was only the state-controlled media controlling what is reported, Singaporeans would have blindly bought into what these highly-paid ministers had said. But not now – not when we have the Internet to help us locate the real answers.

(Note: The following four paragraphs have been omitted, as Mr Harinderpal S Grewal had clarified that he had derived his statistics from invalid assumptions. He would be revising the statistics over the next few days, and I would post them here accordingly. (Sunday 23 June 5.30pm). Please see his clarification at this link below:

Why they could so seriously underestimate Singaporeans’ intelligence, I don’t understand how. The haze might have gotten into their heads but it has only opened our eyes further to the government’s blasé attitude in managing the haze.

Seriously, who is Vivian and Eng Hen trying to kid? The 60% who voted for them – or would it be the 50%, which would have become by now.

This reminds me of when the Chinese government didn’t want to report on the actual SARS cases in 2003 and caused the SARS epidemic to eventually blow out of proportion, because of their lack of honesty.

We Need To Protect The Freedom Of Our Internet

This also reminds me of what Yaccob had said earlier this month about the newly-implemented “licensing framework” by the Media Development Authority (MDA) when he said that, “Singapore is not the only country tweaking the laws governing traditional and online media.” Yaacob had also said that, “New Zealand and Britain are also reviewing their regulatory approaches and frameworks for new and old media (where) he noted that New Zealand’s Law Commission recently called for an independent watchdog to oversee broadcast, print and online news. It will have the power to censure and ask for material to be removed from a website as well as for a published apology.”

But again, these were erroneous arguments presented by Yaacob. The truth was clearly illustrated by Kirsten Han who said that, “The MDA’s licensing scheme shows that nothing was learnt from the UK’s example. It has completely missed the point of the Leveson Report, which specifically stated that the government should have no power over what is published in the media;” and Choo Zheng Xi, who said that, “The New Zealand Law Commission consulted widely and solicited views and opinions from members of industry, the legal fraternity, bloggers, commercial news agencies, and the public at large before formulating their recommendations,” whereas there was no public consultation done on the MDA’s Licensing Framework.

Do you remember how Yaacob had wanted us to “read the right thing”? Would you have known all these if you had read what they wanted you to read – what they had put out in their own newspapers and TV channels?

You wouldn’t have known what hit you!

I don’t trust what this government wants to say anymore – I will read everything with a very discerning eye, and I suggest that you do the same, as many have done so. The haze episode has revealed many Singaporeans who have taken things into their own hands to find out the truths about the haze on their own.

If the haze episode has shown anything, it is that we cannot allow the government to control our Internet. This is the only source of information that we have left where we can investigate on matters on our own and put the truth out.

If we had allowed our Internet to be controlled by the government, that’s it, Singaporeans. We would be cheated, lied and told half-truths and we would be made to believe “the right thing”. This is very, very dangerous. We need to protect the freedom of our Internet and we need to protect our right to read, know and make informed decisions.

And if we need to take away anything from this haze episode, it’s to remember that the people are a lot stronger than the government. Our people – Singaporeans – have shown that we are better able to come together and help one another, while we have to wait for the government to do anything at all to manage the situation.

This government has shown a lack of leadership and strength in this episode, and this shouldn’t even be considered a major crisis! If they are not even able to show the ability to manage the haze, then I shudder to imagine how they would be able to effectively manage other major crises.

Some commenters have questioned the methodology behind the hourly statistics brought up in the comparison readings of the other countries highlighted in this article and claim that they these readings are actually 24-hourly averages.

My search on the websites shown in this article say otherwise.

Please see below what I had managed to find on these websites:

“The API information is based on raw data taken directly from EPD’s Air Quality Monitoring Network.”

I wasn”t able to locate information on the index calculation.

“An hourly index: which describes the air quality today, based on hourly values and updated every hours.”

I wasn”t able to locate information on the index calculation.

From the information sources that I had located, the index readings are obtained from hourly real-time raw data.

I had also just been informed that the National Environmental Agency had refuted this article on their Facebook page. You can see their reply at this link or below:

There is a claim on the page – https://thehearttruths.com/2013/06/22/vivian-eng-hen-other-countries-publish-24-hourly-psi-readings-sure-or-not/ – that Minister Vivian Balakrishnan’s statement, that other countries also use 24-hour averages for their air quality indices, is false.

This is an erroneous claim. The following are links to sites which show that the respective air quality indices of the US, UK and Hong Kong are also updated hourly based on 24-hour rolling averages:

Page 8 of the US Environment Protection Agency technical document at this link, which shows that the AQI is based on 24-hour average PM10 and PM2.5 concentrations:

The UK Air Quality Index is based on a running 24-h mean PM10:

Details of the Hong Kong Air Pollution Index can be found at the following links. The hourly updates for PM10 (RSP) are based on 24-hour averages:

I will leave it to discerning readers to make their own conclusions.

At this point, my concern is that the government should act swiftly to mitigate the effects of the haze. Statements which are contrary to the management of our health should be refrained from, and immediate actions taken to alleviate the impact of the haze.

This, I believe, would be more effective than tweaking or re-presenting the PSI readings, which at the height of the haze, will only cause unnecessary worry and due concern among the people. At this time of uncertainty, consistency in representing is important.

The government needs to act on their leadership.