For this article, I will use a new format to write this article. Along the way, I will make this article more interactive and ask some questions. Hopefully, you will find this more interesting.

Let’s go! There are just a number of questions at the start. Try them, so that when you get to the actual statistics, the realisation might be more interesting.

And if you do think there should be minimum wage,

Before we discuss further on the minimum wage, perhaps let us think about the following:

Now, let me show you the actual numbers:

Note that I am not able to find the statistics for 2012, because in the CPF’s Board’s annual report in 2012, they have mysteriously decided to remove this information on the wage distribution from their report. Why this was done is anyone’s guess.

So, now that you know these statistics, for the estimate that you had made just now,

Did you think there were fewer or more poorer Singaporeans in Singapore? Were you surprised by the number?

Let’s look at the other aspects of how wage can be calculated. I hope you are finding this exercise useful so far!

Now, let’s look at how many hours Singaporeans are really working every week:

Let’s compare this to the number of hours people in other countries with the same level of national wealth work every week:

You can see that Singaporeans work the longest hours among the high-income countries.

Let’s compare the number of hours worked with some other variables.

Do you also know that the countries which work shorter hours have higher productivity (Chart 6)? (Note that not all the countries are included for comparison because of a lack of available data.)

And countries which work shorter hours have higher innovation skills as well (Chart 7). 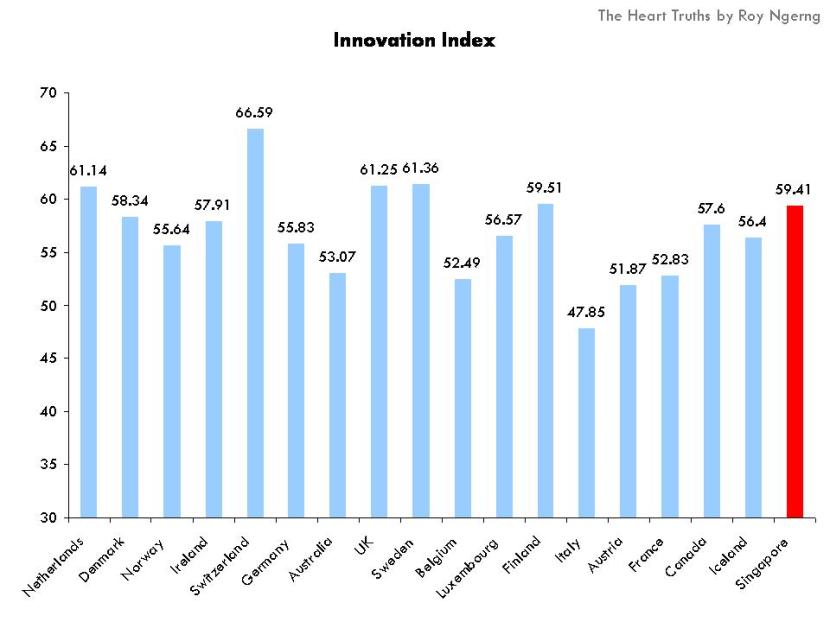 Finally, you can also see that the countries with shorter working hours also have higher fertility rates, with the exception of France and Iceland (Chart 8). 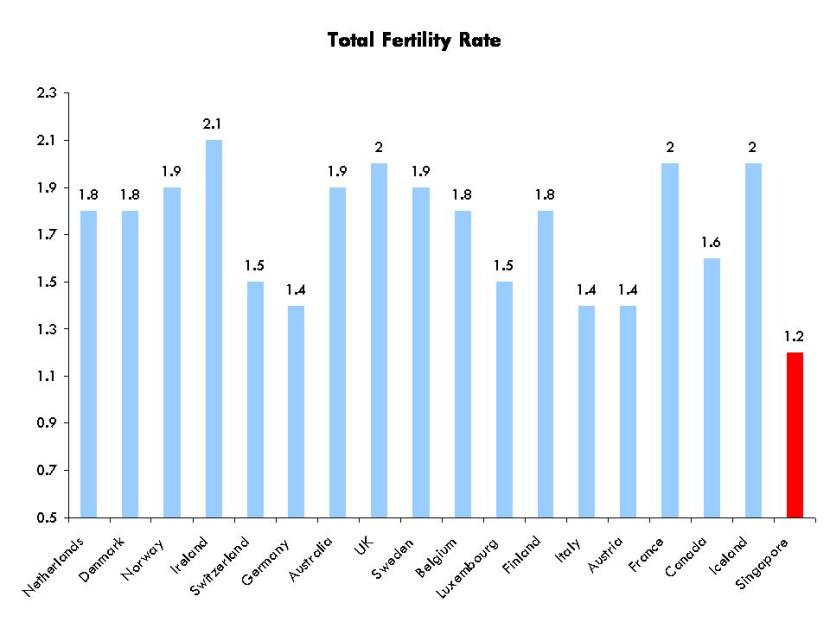 So, from this, you can see that you don’t need to work long hours to more productivity. In fact, it seems like the evidence points the other way. The countries which work the shortest hours are also the most productive and innovative.

On top of that, because they have better work-life balance, these countries are also more likely to have more time to take care of the next generation, which also explains the higher fertility rate.

So, now that you know this,

If so, having looked at how many hours other countries are working and are still able to be productive and innovative,

But according to Seet Min Kok from the SIM Global Education, he had said that for productivity to be increased, workers should first be paid higher wages. He explained this with the following:

Also, do you know that Singapore’s productivity has dropped over the past few decades (Chart 9)?

Not only that, it is also clear that with shorter working hours, the fertility rate in Singapore can dramatically go up. So, why doesn’t the government want to do this?

Finally, let’s take a look at the minimum wages of some countries (Chart 10 and 11). 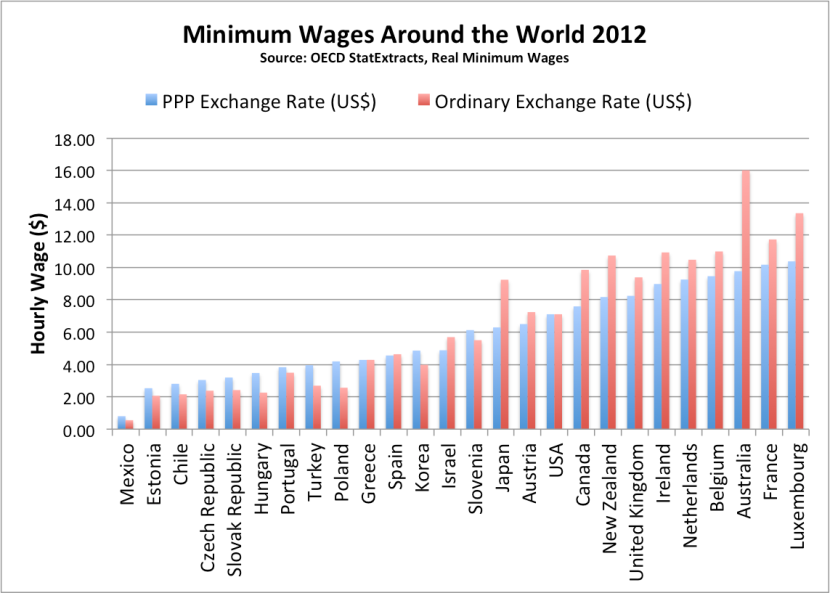 And as I had shown in a previous article, the countries with higher wages are also the ones with higher GDP per capita (Chart 12).

They are also the ones with higher productivity (Chart 13). 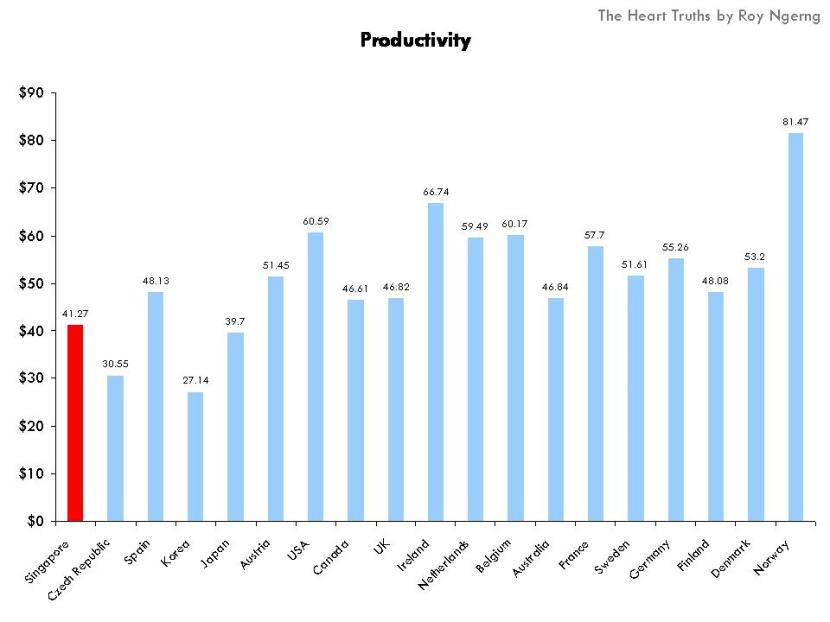 To put the nail in the coffin, do you also know that Singapore has the lowest wages among the high-income countries (Chart 14)? 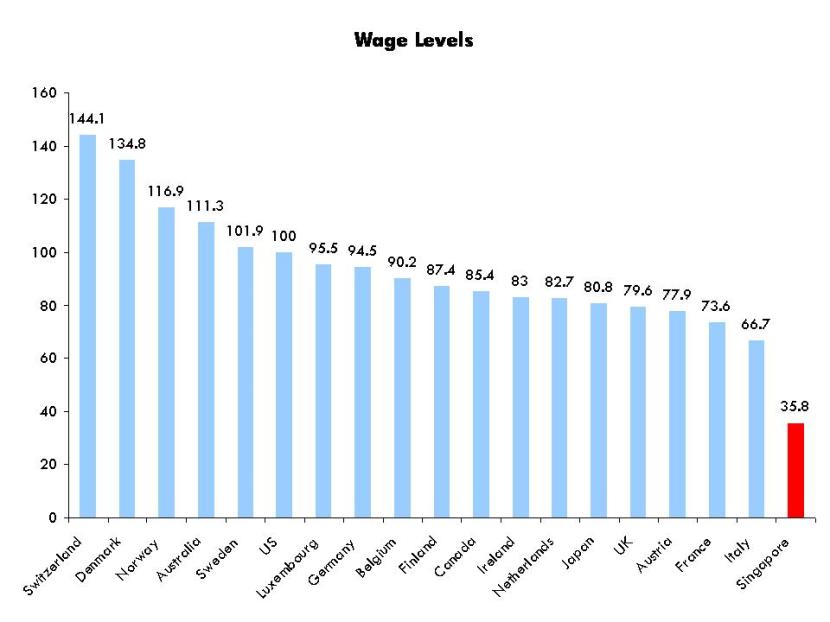 Now that you have all the facts and information presented above, what do you think about the fact that Singapore has no minimum wage?

It is clear that minimum wage in Singapore is long overdue.

Working backwards, what do you think Singaporeans should minimally earn every hour in order to have a basic standard of living in Singapore? Take a look at your answer in Poll 3 and Poll 10 again.

Based on how much you think Singaporeans should minimally earn every month and how many hours we should be working,

By now, the minimum wage that you think Singaporeans should be paid every hour should be higher than what you had initially thought of at the start of this article.

You can see that clearly, there is a need for a minimum wage, right? Or rather, Singaporeans should be paid higher wages in order to have even a basic standard of living in Singapore.

In fact, Acting Manpower Minister Tan Chuan-Jin had also said that “entry-level salaries … have been stagnant over the past 5 years“.

In his article last week, Leong Sze Hian had also shown that real wages for the lower-income earners had dropped again last year.

Which thus means that the highest-income earners and executives in Singapore earn the one of the highest wages in the world (Chart 16). 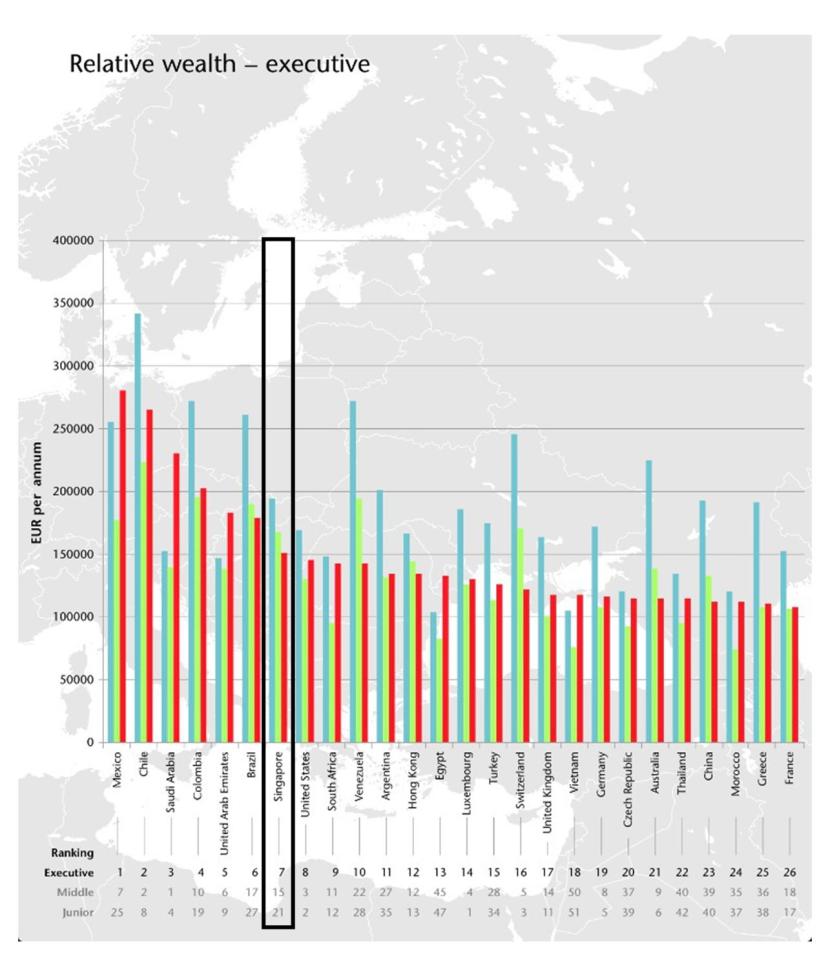 Whereas the junior managers earn one of the lowest wages among the high-income countries (Chart 17).

Do you think that this is acceptable when there are nearly 40% of Singaporeans earning less than $2,000 in Singapore?

As a taxpayer, where the money you pay goes towards paying the wages of these ministers, do you think you want your money to be used like this? Do you want them to pay them lower wages, because what goes to them actually comes from your own pocket?

Not only that, do you know that the rich pay one of the lowest taxes in the world (Chart 19)? Singapore’s tax structure is one of the least progressive among the developed countries.

And, if you are the richest richest in Singapore, you pay even lower taxes, than the rich (Chart 20).

What this means is that the income inequality in Singapore has kept growing and growing over the past decade (Chart 21).

And Singapore is now the most unequal country among all the high-income countries (Chart 23).

Looking at all these, do you think there should be minimum wage in Singapore? It’s not that Singapore doesn’t have enough money, you know. And it’s not that we cannot increase wages because it will be detrimental to the economy. It’s not, because look at the richest – they can afford to pay themselves the highest wages, which means there’s a lot of money to go around in Singapore. But why are the poor so lowly paid? And why is there no minimum wage? Why is it that the ministers, whose wages are pegged to the rich, have decided to pay themselves such high wages, without seemingly any cap, but which has refused to share the wealth with the poor, to ensure that the lower-income earners in Singapore also see their lot increase?

Perhaps you might think that this might be a temporary issue. Maybe the government will turn it around. Let’s take a look at the example of America. Since 1970, as wage growth stopped following productivity growth, the rich started earning increasingly more and more over the poor, such that the income gap has widened and has never been closed (Chart 22).

This means that for more than 40 years now, the income inequality has kept growing in America and is seeing no signs of closing. This is the exact same thing that is happening in Singapore since 2000.

In Singapore, this turn where the rich-poor gap started growing began in 2000. 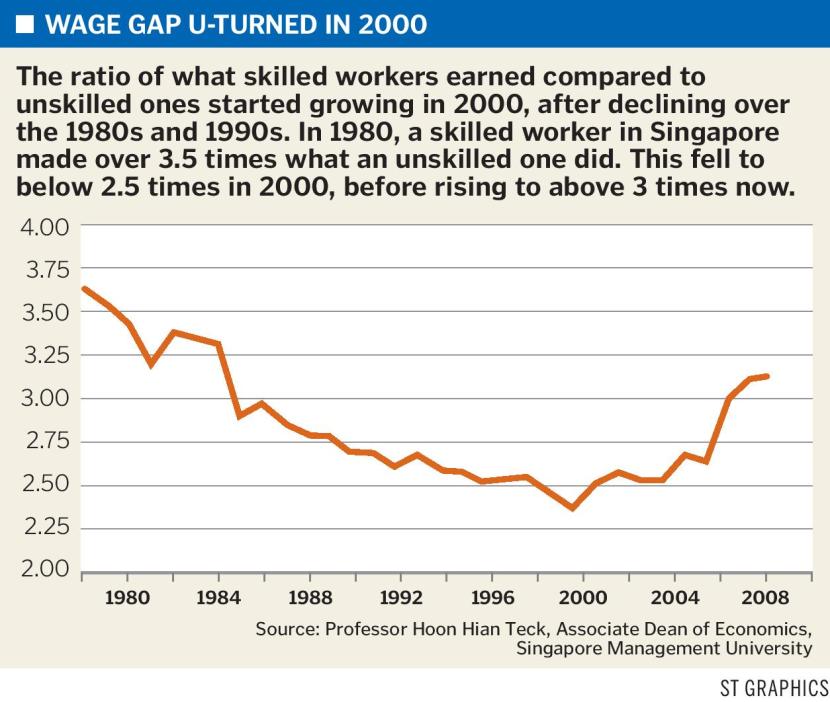 All in, you can see that things have become very unequal in Singapore, and it is quite arguably the case that the PAP has its hand in this. So, the PAP might pay lip service as to how they believe Singapore should be more equal but you can see from the statistics, that clearly, they are not interested in seeing equality happen in Singapore.

The Singapore society is now being segmented to a group of very high-income Singaporeans and the rest of Singaporeans, who are made to earn stagnant wages, which are not catching up with increasing prices.

Finally, the government had introduced a “Progressive Wage Model”. According to Minister without portfolio Lim Swee Say, he had said that the progressive wage model is better than minimum wage.

But do you know that the Progressive Wage Model is just a beautiful name for a promotion pay scale? Which means that this “model” already exists in every company in the world – when you get promoted, you get a pay rise. This is just it.

To put it clearly for you, look at the Progressive Wage Model that the NTUC had shared (Chart 25). 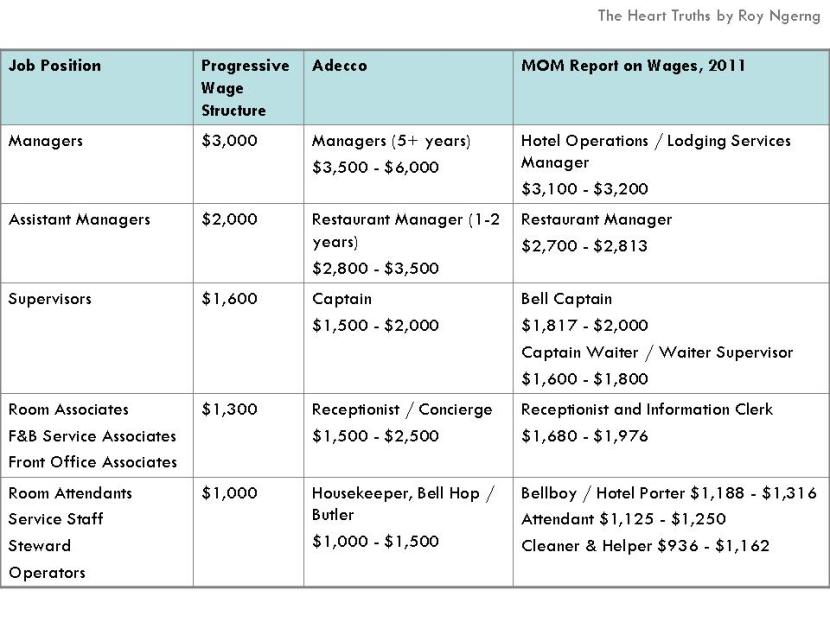 What progressive wages is the PAP talking about? The workers are already earning more than what is set out in the Progressive Wage Model. In fact, the model is not “progressive”. It is regressive.

What is needed is not some fancy model that the government had created which is simply a promotion pay scale, where if you don’t get promoted, and most people won’t, you won’t get an increment.

Then, in the first place, why are you increasing prices beyond the increase of Singaporeans’ wages and beyond the reach of Singaporeans? Is what the government doing fair, when they allow prices to overshoot and allow the rich to be paid higher and higher incomes, while for the lower-income earners in Singapore and the majority of us, we are made to settle with wages which haven’t grown?

Do you think this is right?

Now, before we end off, let me ask some final questions:

I think the answer is quite clear, isn’t it.

Then, my next question is:

The choice is in your hands. It’s up to you now. Make a choice that will respect yourself and your children. It’s time.