In this article, the fifth and final part of our analysis, we examine the consequences of a high out-of-pocket expenditure rate for healthcare.

Our analysis in previous parts has indicated that the Singapore government is under-spending on healthcare, compared to what citizens pay out of pocket. Compared to other developed nations, Singapore can do a lot more in helping citizens finance their healthcare needs.

According to the World Health Organisation (WHO), high out-of-pocket expenditure on healthcare poses significant challenges, such that there is “restricted physical and financial access by the poor” and the healthcare system becomes “extremely inequitable”.

If we rank developed countries according to their Gini-coefficient (income inequality), Singapore ranks the highest. As such, having citizens pay more out-of-pocket expenses for their healthcare needs would only exacerbate our already high levels of income disparity.

This could have serious impact on our healthcare needs, as we pay a much higher out-of-pocket rate than other developed countries.

If we compare the change in the out-of-pocket expenditure over the years, we can see that they have also grown faster than how much Singaporeans’ nominal wages have changed (data from the Ministry of Manpower).

In other words, Singaporeans might be paying more and more for healthcare, but they might not be earning as much to cover the increasing costs.

According to the WHO, “analysis of data from nearly 80 countries reveals a strong correlation between out-of-pocket spending as a share of total health spending and the percentage of families that face catastrophic health expenditure.” 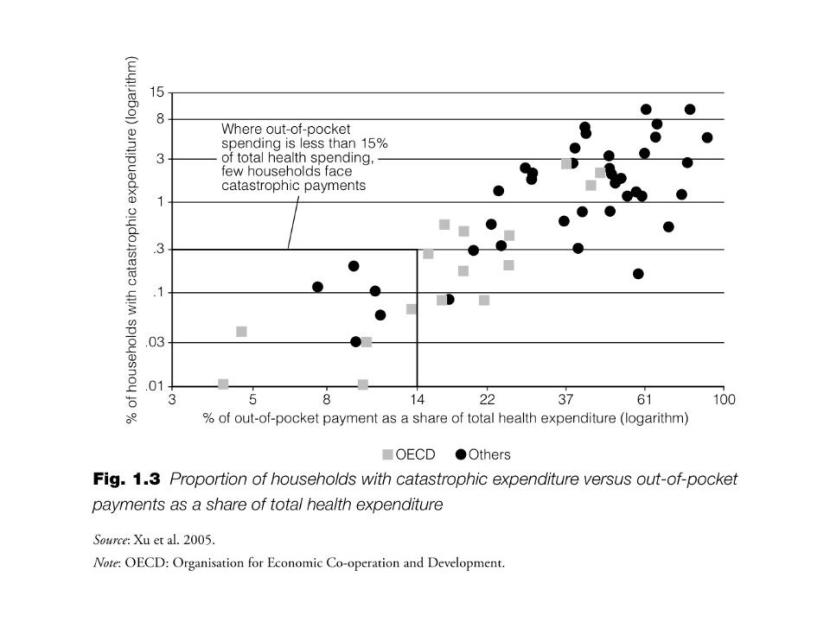 WHO defines “catastrophic health expenditure” as treatments that cost much higher in relation to income, such that “it results in “financial catastrophe” for the individual or the household. Such high expenditure can mean that people have to cut down on necessities such as food and clothing, or are unable to pay for their children’s education.

Furthermore, “many people may decide not to use services, simply because they cannot afford either the direct costs, such as for consultations, medicines and laboratory tests, or the indirect costs, such as for transport and special food. Poor households are likely to sink even further into poverty because of the adverse effects of illness on their earnings and general welfare.”

The signs are not good for Singaporeans.

The burden of healthcare costs is actually most heavily shouldered by the lowest income group.

For the poorest 20% in Singapore, they have to spend 6% of their incomes on healthcare, whereas the richest 20% only need to spend 4.8% (data from the Ministry of Health).

This is not forgetting that for the highest-income earner, because they do not need to pay 20% of all their incomes to CPF, they would be paying an even overall lower proportion on healthcare than the lower-income earner.

For the lowest income earners who have seen their real wages drop since 2000, are we creating an over-burden and unnecessary stress on the poor?

As Tania Ng from the Lee Kuan Yew School of Public Policy had said, “The Singapore government touts having universal health coverage, however this remains disputable as the co-payment element of the healthcare financing system has posed barriers for the low-income into seeking healthcare. The out-of-pocket expenditure as a share of private expenditure is substantial in Singapore, and the figure was 84.8 per cent in 2010. The co-payment policy was intended to prevent moral hazard and curtail wastage. But it has become an inhibition to the poor seeking medical treatment or rehabilitation, leading to over-rationing of medical resources to patients who are truly in need of them. This has been deemed detrimental to the health status of the poor as they delay medical treatment and spiral into more critical conditions; or medical rehabilitation that is pivotal to a full recovery is not sought and patients relapse.”

Over-consumption cannot be taken as a de-facto excuse, when we are in all likelihood facing a situation of under-consumption.

Singapore is facing higher income inequality, with fewer able to afford basic healthcare. The 3M system is not adequately covering all healthcare needs, and with higher out-of-pocket expenditure, more Singaporeans are likely to defer early detection and treatment of potentially catastrophic illnesses.