Prime Minister Lee Hsien Loong had said at the National Day Rally 2013 that, “every school is a good school”.

However, at the AsiaEducationExpo (AEX) 2013, Vice-Principal of Jurong West Secondary School Pushparani Nadarajah said that, “How many of our leaders and top officers who say that every school is a good school put their children in ordinary schools near their home? (Only) until they actually do so are parents going to buy (it).”

Indeed, is every school a good school, as PM Lee claims? Let me show you some statistics that will shock you.

(This is a shortened summary article of an article that I had published yesterday.)

A quick background: The PAP government has created schemes such as the Gifted Education Programme (GEP), to cater to the “intellectually gifted”. They have also created the Integrated Programmes (IP) for the “academically strong”. The GEP and IP are essentially similar programmes as the Ministry of Education (MOE) had said that ,”the secondary GEP organised by MOE was integrated into school-based programmes in the Integrated Programme (IP) schools which were hosting the GEP.”

According to the MOE, primary schools which offer the GEP are “provided with additional teachers” and “an annual programme grant of $53 per pupil“. Already, you can see that things are equal.

But, do you know that: 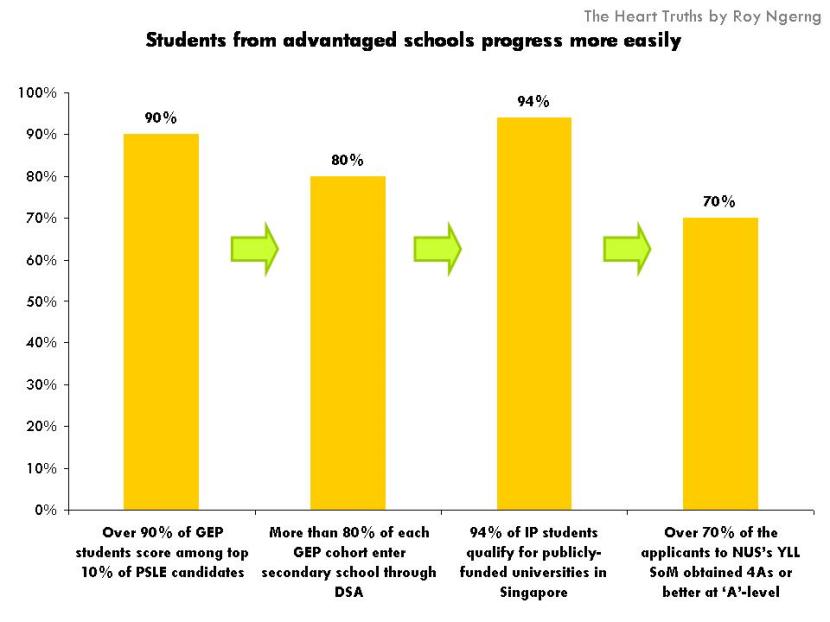 So, you see, the elite pathway will give the students an almost exclusive route to enter the local public universities. But what about students who do not enter elite schools?

If you look at the admissions of polytechnic graduates to university, “over the past ten years, about 200 local polytechnic graduates have been admitted to the Architecture, Dentistry, Law and Medicine undergraduate courses in NUS and SMU,” or an average of 20 students every year. In 2012/2013, there were 741 students who were admitted into these courses at the NUS and around 133 students who were admitted into SMU – a total of 874 students. 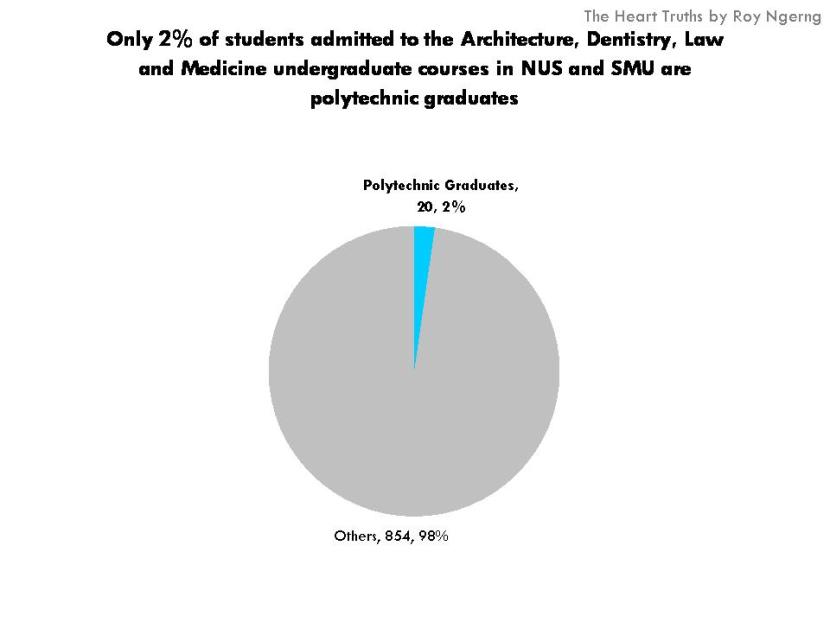 Not only that, when we look at the admission of local polytechnic graduates to law courses at NUS and SMU from 2007  to 2012, there was only an average of less than 2 students from the polytechnics admitted every year (Chart 3)!

The law courses at NUS and SMU admitted 384 students last year, which means that polytechnic admissions only accounted for less than 1% of the total admissions (Chart 4)!

Shocking, isn’t it? The chances of a polytechnic student entering these courses in next to zero, literally!

Things become clearer when you look at household sizes.

Also, “among the Secondary 1 students who enrolled in Integrated Programme (IP) schools in 2009, more than half live in HDB flats.” This is similar to in 2002, where, “about 50% of Singaporean students in Independent Schools live in HDB flats in 2002. (Chart 6)” Again, students from elite schools are more likely to come from high-income households. 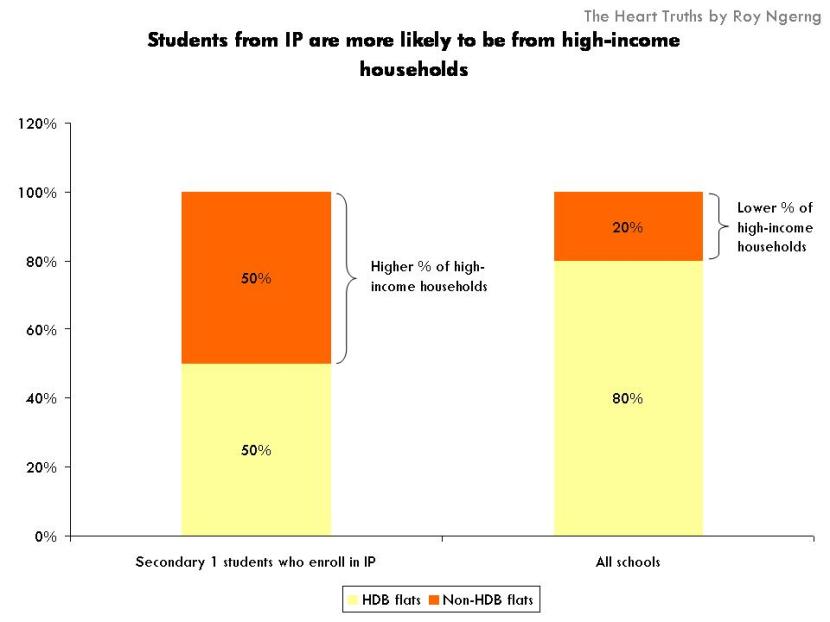 Finally, of the students who enter the public universities, only “one in eight undergraduates … come from households who live in 1- to 3-room flats“ – which is about 12.5% (Chart 8). However, there are 24.6% of Singapore residents who live in 1- to 3-room flats. Shouldn’t there be more students from the smaller housing types, and from the lower-income group who should be attending university, but are not able to?

Take a look at the table below to see the students from primary schools in 1990-1992 who eventually made it to university in 2007.

So, PM Lee might say that, “every school is a good school”. Then, what happened? Why is the reality so different?

Perhaps Vice-Principal Pushparani Nadarajah had hit the nail on the head – do “our leaders and top officers” even dare to put “their children in ordinary schools near their home”? Does Lee Hsien Loong even buy his own rhetoric that “every school is a good school”?

But, why are things so uneven in Singapore? Perhaps the following statistics will show you why:

Do you know that the PAP government spends the least on education (as a % of GDP), as compared to the high income countries (Chart 11).

We also spend the lowest on primary education (Chart 12). 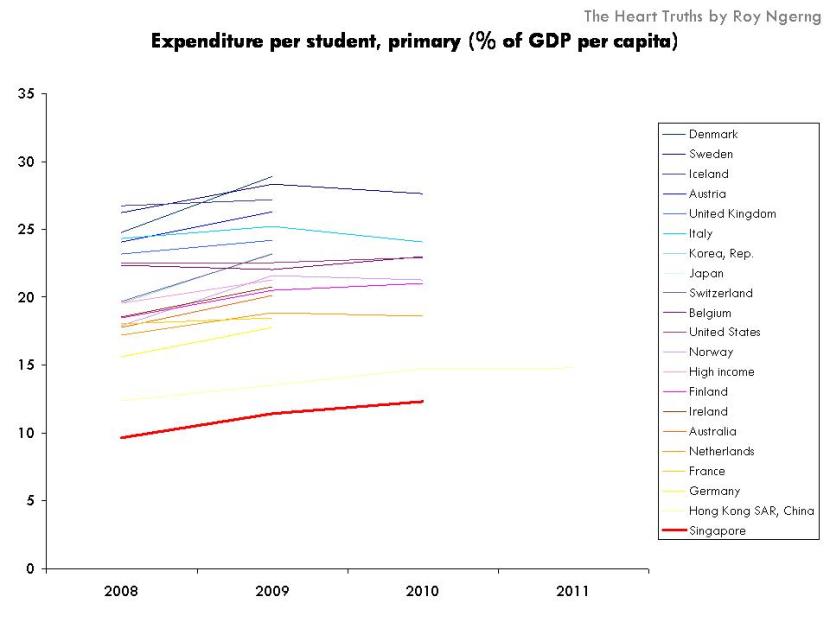 And we also spend the lowest on secondary education (Chart 13).

And thus our students have the lowest progression into secondary education (Chart 14).

What’s happening to the Singapore education system? Why are things so unequal? Why do some students get ahead while other students are prevented from getting ahead?

PM Lee might say that, “we value every child and that we want to give every person the best possible chance to start off well in life,” and that, “I believe we can make every school a good school and we have done a lot of that to ensure that every school provides a good education for the students. We give them the resources, we give them the good teachers, we emphasise values and we have made a lot of progress towards this goal.” But is each school really treated equally?

PM Lee might also say that, “outstanding students must always be able to make it to the top to get into these institutions and you cannot have a closed, self-perpetuating elite.”

But what is he talking about when the statistics show clearly that there is a “closed-self-perpetuating elite”?

The system in Singapore has become very unequal. We are beginning to see the cracks in a system which has become so divisive and unequal that some Singaporeans are falling through the cracks. Education is the cornerstone to any society that can advance and progress. And I am afraid that the PAP government might not be doing enough to prevent these cracks from opening, and to prevent Singaporeans from falling through these cracks.

It is very, very unfortunate.