Last week, I had written about how only 6% of Singaporean university undergraduates receive scholarships. But this isn’t even the real issue. Read on to find out why.

Also, according to the MOE, “the MOE has capped the number of International Student (IS) at 20% of the total intake, while Permanent Residents (PRs) form only a small proportion. For example, in AY2011, IS comprised 18% while PRs were 4% of undergraduate intake.” 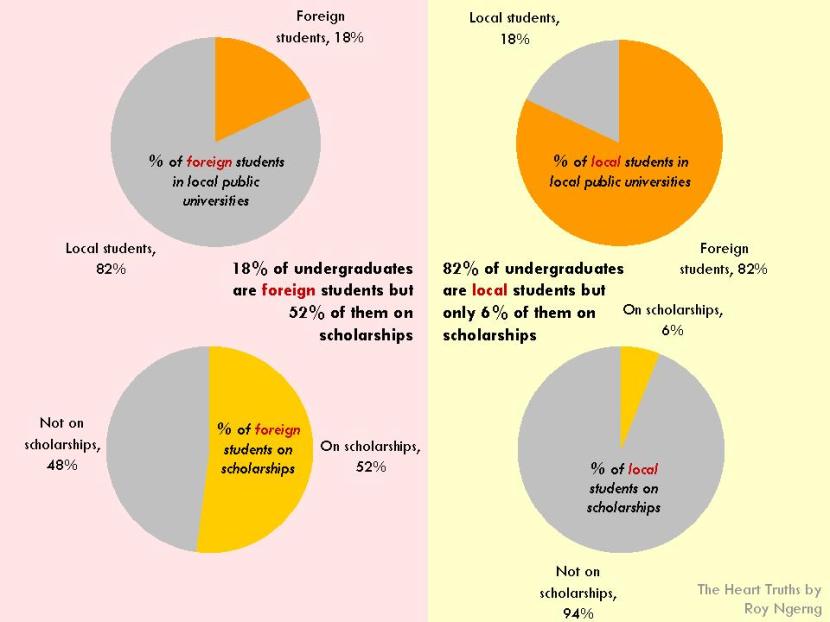 Some commenters have suggested that 52% of foreign students had received scholarships because they might be performing academically better, and might thus have received the bulk of the scholarships.

However, is this truly the case?

It was revealed by the MOE that, “of all the international students who graduated from our Autonomous Universities in 2011, around 45% did so with a second upper class of honours or better“. 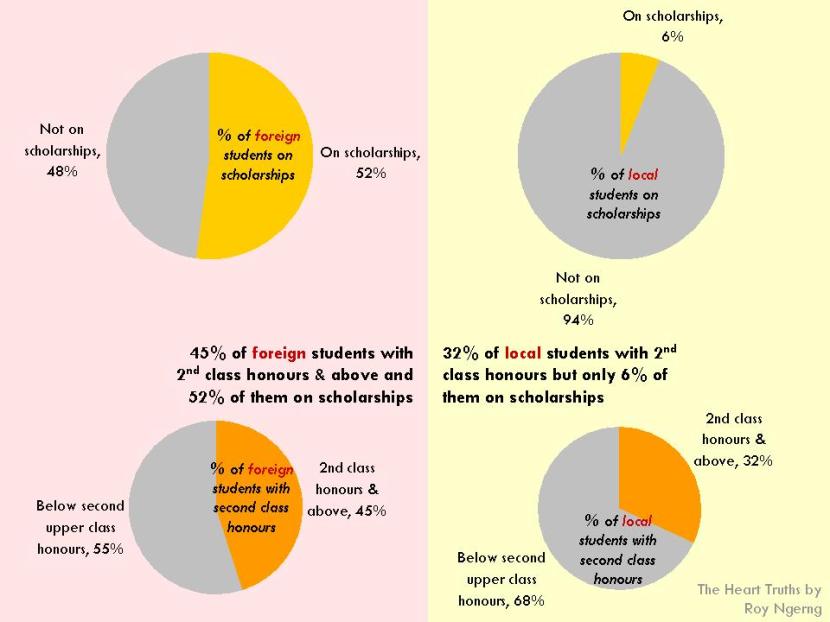 Why then are there only 6% of Singaporean and PR students on scholarships, instead of 40%?

Already, it is estimated that there are 28% of Singaporeans living in poverty. Thus, of the Singaporean students who enter the local public universities, would there be 28% who would have difficulties paying for their university fees?

Why has the PAP government made it so easy for the foreign students to receive scholarships but for equally deserving Singaporean students, they are made to pay their own way and have to graduate “with an average debt of about $20,000“?

Don’t you think that something is severely wrong here?

Majority Of Unemployed Singaporeans Are Tertiary-Educated Who Face Unbridled Competition

Is this how the PAP government should be treating Singaporeans – Singaporeans who have a stake in our country and who would need the support from the government to receive adequate education and then contribute back to Singapore?

Why is the PAP government not supporting Singaporeans but is instead giving away money to foreign students – in the hope that they would stay and contribute to Singapore?

I would be proud if my government is able to treat people in our neighbouring countries with respect and readily extend our support to them. However, when the PAP government isn’t even able to look out for its own citizens, but would choose to look out for the citizens of another country first, isn’t something not quite right here?

Where is the responsibility of the PAP government? Singaporeans – or rather 60.1% – had voted for the PAP because we expect the PAP to be able to look out for the needs of Singaporeans, but why is their priority on foreigners and not on Singaporeans?

This wouldn’t be the first case of the PAP government looking out for foreigners instead of Singaporeans. As I’ve also written, in the Comprehensive Economic Cooperation Agreement (CECA) that Singapore had signed with India, there are clauses which protect the rights of Indian workers to work in Singapore because the Singapore government is not allowed to “require labour marketing testing” for the entry of these workers. Singapore is also required to “grant the accompanying spouses or dependent of the other Party the right to work as managers, executives or specialists.”

Also, there are no levies or quotas to the hiring of workers on Employment Passes and in the Fair Consideration Framework that the Ministry of Manpower (MOM) had introduced, because the MOM had said that it “does not review the merits of a firm’s hiring decision, as the firm is best placed to decide on which candidate can do the job,” which would mean that this “framework” – and not a law – wouldn’t protect Singaporean workers as well.

So, from all these policy decisions by the PAP government, it is clear that they do not seem to be interested in protecting Singaporeans, even as Singaporeans are equally deserving or in need of assistance from the government that we had voted in, precisely to help us for. Yet, the PAP government seems to have relegated it’s responsibilities, in not providing enough scholarships for Singaporean students, and in not enacting adequate policies and laws to protect the employment of Singaporean workers.

As a Singaporean, I am very worried. If the government that the majority of Singaporeans have voted for has chosen not to perform its duty and responsibility, then who else do we have to look to, to protect our lives and livelihood? Should we ask the Malaysian or Indonesian government to take care of us instead?

If the PAP government is not able to perform its duty as its elected responsibility, should we then vote to put in other parties in government who would actually perform their duty and protect the rights and needs of Singaporeans?

I am very worried now. Are you? 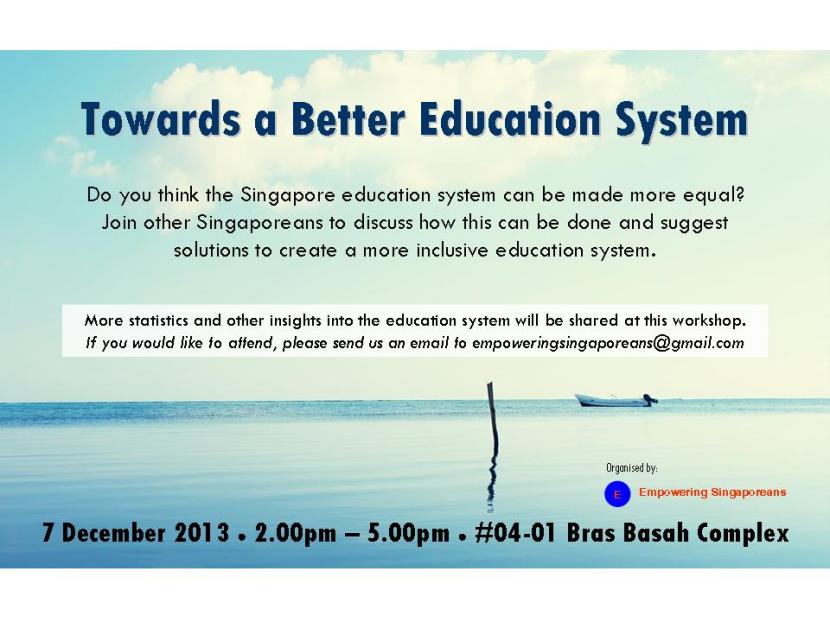