By now, many Singaporeans would have read about the ongoing debate over the Health Promotion Board’s (HPB) posting of an FAQ section on sexuality on its website.

Many Singaporeans were shocked when Mountbatten SMC MP Lim Biow Chuan said, “I cannot agree that ‘A same-sex relationship is not too different from a heterosexual relationship’. The two relationships are different and they go against the Government’s policy of promoting heterosexual married couples to have healthy relationships and to build stable nuclear and extended family units.”

This is not the first time a PAP MP had said something like this.

Thanks to Alex Au, who had “dug up the speeches made in parliament during the 2007 debate on Section 377A of the Penal Code” and looked at the “gay-related questions” that “the New Paper (had) posed“, we are able to look back at more quotes from the MPs.

(This article is not just about gay issues here – if you can’t wait, zoom right down to the end.)

Apparently, according to Alex Au, Mountbatten SMC MP Lim Biow Chuan had also “announced that he did not agree with the practice of homosexuality”.

From Marine Parade GRC (which is right next to Mountbatten SMC), MP Seah Kian Peng had said, “I am a Member of Parliament who believes that, as a nation, our families are not ready to have an open acceptance of the gay lifestyle, including same-sex marriages and gay adoption of young children. I believe that these key institutions would be weakened by the repeal of section 377A. This view, like this debate, is a matter of principle, not of numbers.”

Pastor Lawrence Khong, who had said that, “We disagree that “a same-sex relationship is not too different from a heterosexual relationship,… (and that) a homosexual relationship is, therefore, unnatural, abnormal, and procreation is impossible,” had once invited Marine Parade GRC MP Goh Chok Tong to the Faith Community Baptist Church, though it was later clarified that Goh “was on a walkabout in his Marine Parade constituency on Sunday when he made a 10-minute unscheduled stop at the church after being invited in by churchgoers“.

Transport Minister and Moulmein-Kallang GRC MP Lui Tuck Yew, was quoted by Alex Au as having said, “If you say homosexuality — you are not doing harm to anybody, it’s only between the two of us… Well, there are lots of relationships between either a person and maybe even an animal, or between a person and another person, perhaps incestuous in nature, that are between the two of us and we are not doing harm to anybody else.” And he had also said that, “I am not ready to move and I do not think a major segment of society is ready to move.”

Also from Moulmein-Kallang GRC, Denise Phua had said, “I am not in favour of homosexuality”, but she also said that, “sexual orientation is an individual decision”.

Moulmein-Kallang GRC is next to Mountbatten SMC.

According to Alex Au, Holland-Bukit Timah GRC MP Christopher de Souza devoted “a major part of his speech to 377A, kept referring to the “homosexual lifestyle”  — a derogatory term much favoured by the Christian Rightwing for its implication of hedonistic whoring and that homosexuality is merely behaviour that can be changed.”

When asked if Singapore is ready for a gay MP, MP Liang Eng Hwa, also from Holland-Bukit Timah GRC , had also said, “Definitely not. We still hold Asian values. I don’t think representing the younger generation is just about addressing the gay issue. Personally, I don’t think homosexuality is a right value.”

But what do Singaporeans really think? According to a survey done by The New Paper, 76% “have no objections” because they “based their view on the capability of the individuals, rather than their sexual orientation”.

Again, from Holland-Bukit Timah GRC, who can forget the “gutter politics” that MP Vivian Balakrishnan had played against Vincent Wijeysingha.

From next to Holland-Bukit Timah GRC, Choa Chu Kang GRC MP Gan Kim Yong had said that, “I think the mere statistical presence of homosexuals among us does not make it the right thing to do and certainly does not imply fundamental shifts in societal norms.” Alex Au had also quoted him as saying that, “homosexuality is not “the right thing to do”“.

From Choa Chu Kang GRC again, MP Alvin Yeo had also made an impassionate appeal against same-sex rights. You can watch the video of his speech here.

Teo Ho Pin, who is MP of Bukit Panjang SMC (which is right smack in between Holland-Bukit Timah GRC and Choa Chu Kang GRC) had said that, “As society progresses, new norms will develop. But we will still need to strike a balance and know where to draw the lines.” He had also made the remark, “Should we ask for 20 lifeguards for a swimming pool, because children drown and MPs also have children?”, when asked to consider that family members of MPs might also be gay.

Northwards from Holland-Bukit Timah GRC and next to it,  MP Mohammad Faishal Ibrahim from Nee Soon GRC had said, “The gay community in the past and present has its private space in Singapore and, like other citizens, the rights to vote and enjoy the benefits that most Singaporeans are accorded.” But then, he said, “The message that I heard loud and clear is that the majority of Singaporeans are not ready for open homosexuality acts to be part of our way of life yet.” Contradictory?

Another Nee Soon GRC MP Lim Wee Kiak had said, “I’m a doctor and I do not think that homosexuality is natural. If my son told me one day he is gay, I will honestly be upset. But I won’t condemn it. We need to study the deeper underlying issues involved.”

Now that you know this about Nee Soon GRC, some things are not what they seem – some things were done for show.

Then southwards from Holland-Bukit Timah GRC and Moulmein-Kallang GRC, in Tanjong Pagar GRC, Alex Au also said that for Tanjong Pagar GRC MP Indranee Rajah, “The gist of her argument was that an unenlightened majority had a right to deprive minorities of their rights. Citing another example, she pointed out that some countries today have  “institutionalised discrimination on the basis of either race or religion as part of their official policy. And for those countries, they consider it right.” So there’s nothing wrong with discrimination against a section of Singapore’s population when “society” wants it, she argued.”

This reminds me of what Tanjong Pagar GRC MP Chan Chun Sing had recently said that, “I’m against any company or website that harms marriage. Promoting infidelity undermines trust and commitment between a husband and wife, which are core to marriage.”

To his credit, Lee Kuan Yew had said, “There’s a genetic difference, so it’s not a matter of choice. They are born that way and that’s that. So if two men or two women are that way, just leave them alone.” And to Vivian Balakrishnan, he had this to say, “Vivian Balakrishnan says it’s not decisively proven. Well, I believe it is. There’s enough evidence that some people are that way and just leave them be.” So, why are two tunes sang in one GRC? – but I don’t think the politics in Tanjong Pagar is more complex than that. You don’t get to have something without exchanging something for something else.

There was a lone ranger from the Tampines GRC MP Ong Kian Min who had said, “The overwhelming sentiment of Singaporeans is that they are not prepared to compromise their conservative family values by opening up to alternative sexual behaviour, nor allowing it to permeate across time honoured boundaries into the conventional family sanctity.” Apparently, Ong Kian Min was supposed to be retired and to be replaced by Steve Tan. But what happened?

And the story deepens.

Why do I even talk about this?

Because look at the map below. It will summarise everything for you. The East-West divide in Singapore has a new dimension now. And no, this is not just a gay issue. Think broader. 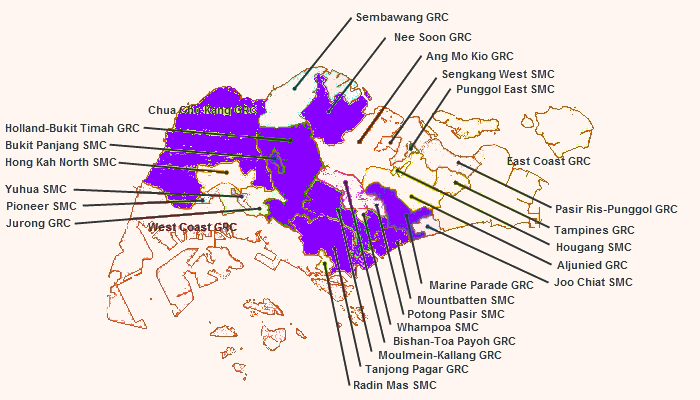 The highlighted purple faction are where the MPs who have spoken out against same-sex rights currently are.

Where are the lines drawn? Who is shaping the agenda? And how is the agenda being shaped? Who’s infiltrated what, where, whom?

Who is carving out our country, and for whom’s pleasure?

I leave that to your hypothesis. I don’t think I like the idea of being played around with. But there’s something bigger than what it seems.

But to piece the jigsaw puzzle, you just need to remember something else – (1) who announced the Population White Paper and (2) who announces the Budget? And why does everyone keep wanting to fight to announce the Budget? That makes 3.

It’s true that birds of a feather flock together, but these aren’t all the same birds – how are the inroads made, who’s flanking, and who’s pushed aside?

And perhaps now you will understand why City Harvest was taken to court and then why a PAP lawyer then helps to fight the case. The PAP lawyer – Edwin Tong – is from Moulmein-Kallang GRC. That’s right, one from the purple zone.

All is not what it seems – beneath it all, a game that’s play, invisible to the naked eye but divided within.

You just need to remember who’s who so that when they play musical chairs, you will remember as well.

And for my fellow LGBTQ friends, when the time comes, remember as well, well.