This is a two-part article by Leong Sze Hian and I where we analysed Budget 2014 and reveal that even in Budget 2014, the Singapore government is still not spending a single cent for Singaporeans, but not only that, are earning from us at the same time.

Budget 2014 was just recently announced last week. Is Budget 2014 truly as transformative for Singaporeans? Does it really represent any fundamental shift by the government towards wanting to move Singapore towards being a more equal society? We take a quick look.

For education, the government announced that they will increase the per capita monthly household income threshold for students to be able to qualify from bursaries from $1,700 to $1,900 (or two-thirds of all Singaporean households). For university undergraduates, those from the lowest one-third of households will see bursaries increase to $3,600 a year. Middle-income students will see a $450 increase to $2,600 a year.

According to the government, these changes will together cost up to $147 million more each year.

However, the government had recently announced that $210 million in tuition grants are given to international students in the polytechnics and universities each year, and they had also announced that $36 million are given in scholarships to each cohort pre-tertiary and undergraduate students every year (or an estimated $144 million for 4 years of undergraduate cohorts). This would mean that a total of at least $354 million are given to international students each year.

The question then is, if the government can afford to give at least $354 million to international students, would they be able to do more for the fees of Singaporeans other than the subject additional spending of $147 million? $354 million is almost 2.4 times more than the additional $147 million.

The government announced that there would be Medisave top-ups for Singaporeans aged 55 and above in 2014.

For older Singaporeans born before 1950 and aged 65 and above in 2014, they will receive annual Medisave top-ups of $200 to $800, with the older cohorts receiving more. This is part of the Pioneer Generation Package, which is budgeted at $260 million this year. For older Singaporeans aged 55 to 64 years old in 2014, they will receive a Medisave top-up of $100 to $200 annually over the next five years, which the government said is expected to cost around $440 million over 5 years, or about $88 million a year.

Not only that, the government had also announced that they will raise subsidies for lower- and middle-income Singaporeans for Specialist Outpatient Clinics to 70% and 60% (from 50%) subsidy respectively. This would cost an additional $123 million to the government.

In total, the Pioneer Generation Package, the Medisave top-ups for Singaporeans aged 55 to 64 this year and the healthcare subsidies would cost around $471 million to the government.

But does this mean that the government would lose $471 million?

Not really. This is because the government had also announced that the CPF employer contribution rate will increase by 1% to all workers, which will be channelled to the Medisave Account.

Thus the government might be paying out $471 million for the Pioneer Generation Package, the Medisave top-ups for older Singaporeans and the healthcare subsidies, but they would be collecting $860 million more from Singaporeans, or at nearly 2 times more. 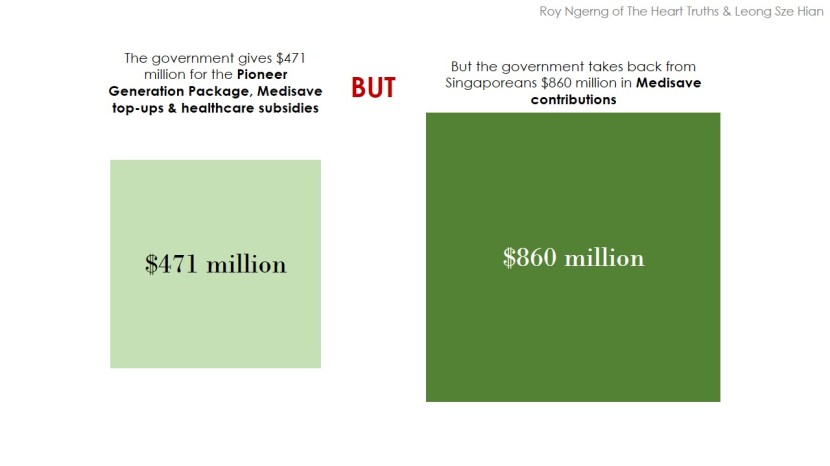 Quite shocking isn’t it, that the government had said that they had wanted to move towards a more “fair and equitable society” but yet when you do the maths, they are still not fulfilling their part of the bargain. Instead, they have once again made Singaporeans pay more than what we rightfully should – then where is all the additional money that they are collecting going to?

Yet, as we have shown, they are willing to spend an extravagant amount for international students for their education fees but are less willing to spend for Singaporean students for our fees – which makes you wonder, how valuable are citizens in their eyes? Are we being taken for granted?

But this is not even all – join us tomorrow where we would share with you that when you look at the larger picture, not only is the government still not spending a single cent in Budget 2014, they are still doing much less than what their responsibility should be.