For far too long, Singaporeans have been told that we don’t earn what we deserve because we haven’t been hardworking enough, or that we are not good enough. And so we resign ourselves to our fates.

Today, find out here how the government undercuts your wages and how we are made to fight among ourselves.

(1) Singaporeans Are Losing $1,600 Of Our Income Every Month

In an economy, the workers – us – work to help grow the economy and the GDP. In an optimal scenario, all of us should share in the growth of the GDP – we should be getting what we help to earn back.

However, in Singapore, the wage share in Singapore is only 42% – this means that Singaporeans are only paid 42% of what we help to produce.

But Singapore is a very rich country, by per capita GDP, and when we look at other high-income countries, they would pay their workers up to 60% of the GDP. What this means is that Singaporeans are paid very unfairly. Whereas the workers in other high-income countries get back a much larger share of what they have helped produced, Singaporeans are given much lesser – by up to a massive 18 percentage points.

This means that in another high-income country, for every $100 that their workers helped earned, they would receive $60 back in return. In Singapore, we are given back only $42 while $18 goes back into their profits (on top of the $58 profits that they already earn).

If you look at the GDP, Singapore’s GDP was $370 billion in 2013. The 18% that we should have gotten back but are taken away from us is $66.6 billion. If you divide this by the total labour force of 3.4 million workers in Singapore equally, this means that each worker should receive an additional $1,612 every month.

But wait, that’s not yet it.

If the wages are more equitable in Singapore, let’s assume that the richest 15% should only earn a third of the the income (or what they would have earned in a more equitable country) – or 14% of the wage share, which means that as compared to the 21% of the wage share that the are currently getting, another 7% should be returned to us. 7% of the GDP is $25.9 billion, which means that each worker should get another $627 monthly back.

In other words, a worker in Singapore who currently earns $800 a month should receive $3,039 and a median income earner should earn $5,489. For a high-income earner, they would be getting an additional $4,179 than the rightful wage.

When you look at the other countries with a similar income level as Singapore by GDP per capita, indeed, for a person who earns $800 in Singapore, the counterpart would earn $3,667 in Sweden. According to Mercer, Australia has a similar cost of living in Singapore and Australia has a minimum wage of $3,080. Thus the minimum of $3,039 that Singaporeans should be earning is just about right.

So, when we we have all the statistics at our disposal, we realise that the Singapore government is underpaying Singaporeans severely. All the claims about their Progressive Wage Model being better than a minimum wage is utter nonsense when the best they can afford as the lowest basic wage is $1,000. $1,000 is a far cry from what a low-income earner in Singapore should actually earn, taking into account the cost of living and equitable distribution – a low-income earner should be earning at least $3,000!

But next, let’s look at tax and CPF.

Wages are only one side of the story – the other side is how the personal income tax and CPF structure have also been finely made to undercut Singaporeans. 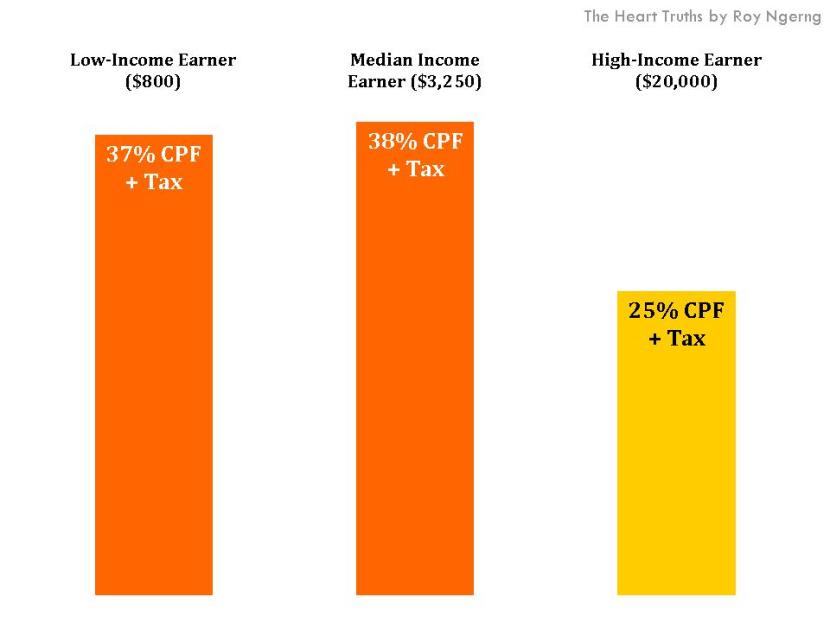 What this means is that low- and middle-income earners pay at least 12% more of their wages into personal income tax and CPF than high-income earners do!

To put things into perspective, 73% of Singaporeans earn less than $5,000 every month – which means that for almost three-quarters of Singaporeans, we have a much lower purchasing power simply because of this personal income tax-CPF mechanism that the government has put in place to undercut the wages of low- and middle-income Singaporeans.

How this personal income tax-CPF mechanism is more insidious is this:

For personal income tax, the government has no choice but to report this as government revenue, which they have to return back to Singaporeans. So, for high-income earners, whatever they pay in personal income tax, it goes back to them. For CPF, a person who earns $20,000 every month would need only pay a CPF of 9.25%, so in relative terms, it is less of a hindrance.

In contrast, for 73% of Singaporeans, we would need to pay 37% or more of our income into CPF. Now, the thing about the CPF is that there is no international standard for reporting. The Singapore government can change its reporting framework at their whims and fancy. What does this mean?

This mean that they don’t have to report to you what they use with your money.

For the CPF, the government has intentionally made it very complicated. 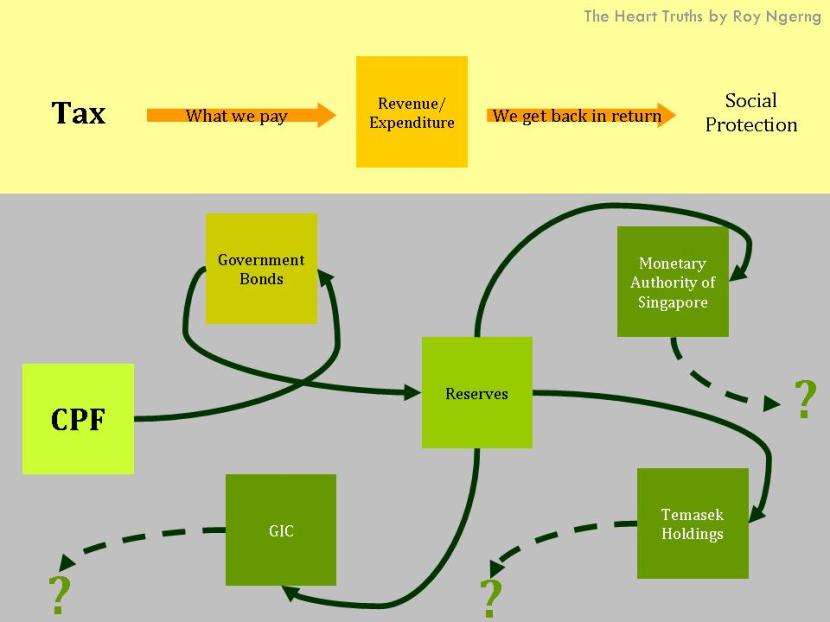 “Borrow” is a very nice word. In reality, how many Singaporeans actually get to see the money that the government “borrowed” returned back?

Do you even know who sits on GIC or Temasek Holdings? Do you know in what GIC invests in and what the investments are earning? That’s where your money is going, mind you. Do you know that the Singapore Prime Minister is Chairman of GIC and the two Deputy Prime Ministers are also on their board of directors?

As I have explained several times, for many of us who hold on dearly to the idea that the “CPF is our money”, it is not. In 2013, the total balance in the CPF is $253 billion. And what was withdrawn was only $14.9 billion, or only 5.9% of the total CPF balance and 1% of the reserves. If the CPF is “our money”, why is it that there is a more than a quarter of a trillion sitting inside the CPF?

Meanwhile, our CPF has helped to earn $1 trillion in the reserves. Do you see any of this billions or trillion coming back?

The whole point I am trying to make is this – for personal income tax, the government collects and they return (well, somewhat and then not – read this article to find out more). But for CPF, not only does the government takes it away from us, the amount they return is minute. So, if we give up our money into CPF, when Singaporeans say, “we won’t see it coming back”, it is as what we say – we won’t.

How did the CPF become from being “our money” to “we won’t see it coming back”?

There are many tricks that the government has done to siphon your CPF away from you:

Which is why Leong Sze Hian has estimated that only 1 in 8, or 13% of Singaporeans are able to meet the CPF Minimum Sum. 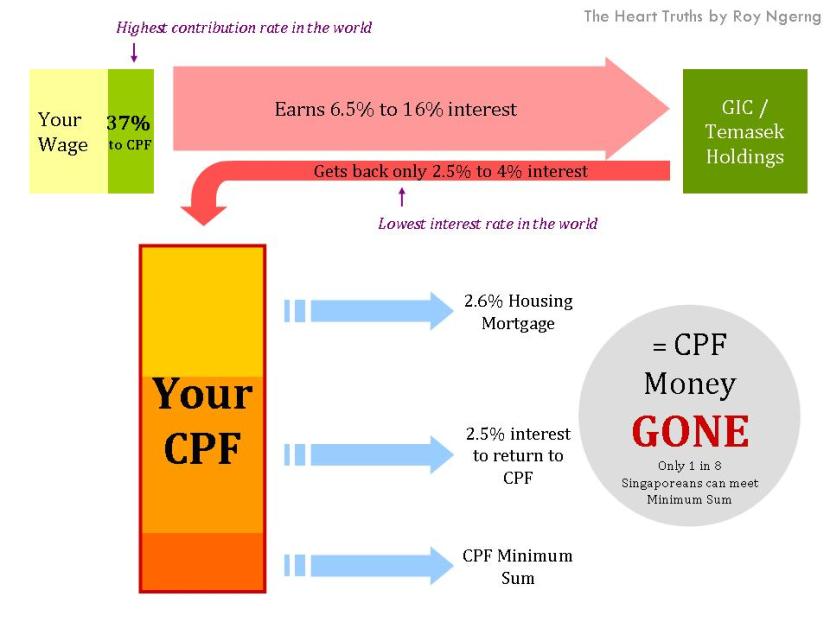 (5) Singaporeans Are Not Being Paid Fairly

So, do you see the whole picture now?

Now, to be very clear, this entrapment exercise mainly affects the low- and middle-income Singaporeans.

However, note that this is by no means a fault of the high-income earner. This is a critique of the system that the PAP has created more than the individual earner.

It is because the PAP has already created a system where they would systematically pay themselves the highest income and us – the majority – the lowest, and where they make us pay the highest social contribution/CPF rates in the world and siphoned it off for their own use.

This 15% – the richest in Singapore, which comprise the Singapore Prime Minister, the PAP ministers and the PAP politicians – this richest 15% controls the whole system in Singapore – the government, the civil service, the investment firms, our CPF and the largest companies in Singapore – this is where the profits are going.

Yet, we stay silent and blame ourselves. Yet, we believe we are not good enough. They throw us a bone and expect us to fight among ourselves over the bone which has so little meat. And like blind mice, we fight and struggle among ourselves and blame one another for our mishaps.

When you open your eyes and see for yourself who is taking away your money – the poorest 85% of Singaporeans – when we are willing to open our eyes and wake up to the reality that our lives have been so squeezed and compromised because of a PAP which has constructed this system to stifle us, you would know who the perpetrator of our oppressed lives are.

Yet, why do we choose to fight among ourselves instead of turn our attention to the very people who have created this utter mess? Don’t you think it’s time we stop allowing ourselves to be oppressed?

It’s time to take the fight to where it should be taken. It is time you take a stand for yourself, for ourselves, for our children and for the children of our children.

What say you? Are you ready?