The Economist has ranked Singapore 5th on the crony-capitalism index. According to The Economist, Singapore is the 5th most easiest place for “where politically connected businessmen are most likely to prosper“.

Also, Singapore’s crony sectors to non-crony sectors share seems to be the third highest amongst the countries.

The Economist had also said that, “efficient government is no guarantee of a good score” as “Singapore (is) packed with billionaires in crony industries”.

But this ranking isn’t even as comprehensive as The Economist had only counted “the wealth of billionaires”, and “plenty of rent-seeking may enrich the very wealthy who fall short of that cut-off”, which means that Singapore could do even worse. 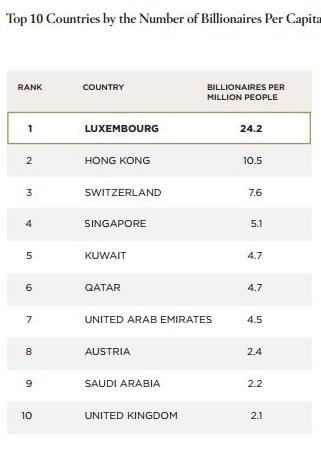 Thus it is worrying when the Singapore Prime Minister had said that, “In fact, if I can get another 10 billionaires to move to Singapore and set up their base here, my Gini coefficient will get worse but I think Singaporeans will be better off, because they will bring in business, bring in opportunities, open new doors and create new jobs, and I think that is the attitude with which we must approach this problem.”

Is this the right attitude? Is it right when Singapore’s capitalism is actually a “crony” one, and where the rich will get richer while the poor would get poorer.

In fact, when you look at the rich-poor gap, the gap has indeed become wider and wider – the rich has accumulated more wealth while the poor has heavily stagnated.

Not only that, the gap has grown so wide that Prof Tilak Abeysinghe has shown that “the bottom 30 per cent of (Singaporean) households spent 105 per cent to 151 per cent of their income last year “.

Indeed, the government might hang on to the age-old argument for cronyism but this has clear implications for the general populace.

For Singapore, arguably it has resulted in an elitist society, huge influx of foreigners, low wages and a high cost of living unmatched by any developed society in the world.

Where Singapore is now ranked the most expensive place in the world to live in and where Singaporeans are paid among the lowest wages among the high-income countries, it is perhaps high time to shift away from our current economic model towards one where the wealth of the country is equitably shared among its inhabitants, who have toiled and worked hard to create the Singapore that it is today, together.

As scientists have noted that even with “growing economic instability”, “the elite of society have often pushed for a “business as usual” approach to warnings of disaster until it is too late.”

However, scientists have also explained that, “Collapse can be avoided and population can reach equilibrium if the per capita rate of depletion of nature is reduced to a sustainable level, and if resources are distributed in a reasonably equitable fashion”.

We can no longer sit back and watch the PAP ravage our country and tear our society apart. The PAP has failed miserably as a government and no longer takes its responsibility seriously. It is now in the business of making money off Singaporeans while Singaporeans continue to suffer from low wages and inadequate support for our education, healthcare and retirement.

Singaporeans continue to have to earn low wages while the rich – the PAP themselves included – continue to pay themselves the highest salaries in the world. This inequality is tearing Singapore apart.

The society and the people that we have built together is now being threatened by the PAP’s greed and wanton desires, so much so that Singaporeans have to choose to die or sell our homes just so that we can pay for our medical bills. But why should we, when the PAP has taken such a large chunk of our wages into CPF, Medisave and MediShield? No other country in this world takes our money away for social security in as extravagant a manner as the PAP, yet the PAP has given back to us the least.

And since the PAP does not know how to do so, we will ask them to go.

On 3 May 2014, we will be holding a protest to protest for the rights of Singaporeans to receive fair wages and to be rightfully employed. We will not let the PAP go on this, and no Singaporean should take this sitting down.

It’s time to let go of our fears, of our denial and it’s time to stop feeling that we are not able to do anything. We are 3.3 million Singaporeans, and together, we are force to be reckoned with. No one, no one can barge into our lives, take what we have built and worked so hard for and steal it away from us. No one.

On 3 April, let’s come down and unite. We will show them. 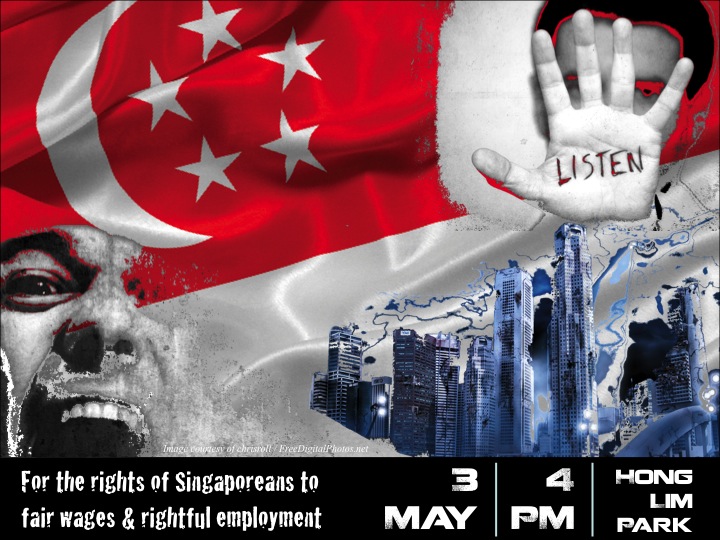