According to the CPF Board and the Ministry of Manpower (MOM), the CPF Minimum Sum has been increased because, “In order to maintain its real value over time, the Minimum Sum increases to account for inflation.”

To maintain the real value of the CPF Minimum Sum, to account for inflation, the CPF and MOM say?

So, what “real value”? In fact, the CPF Minimum Sum has been increased way more than necessary! But why would the government keep doing that?

Now, take a look at how much our wages have been growing. For many years, it never grew above even 5%. In fact, in one year, there was 0% growth, or no growth at all. And in some years, there was close to zero growth. 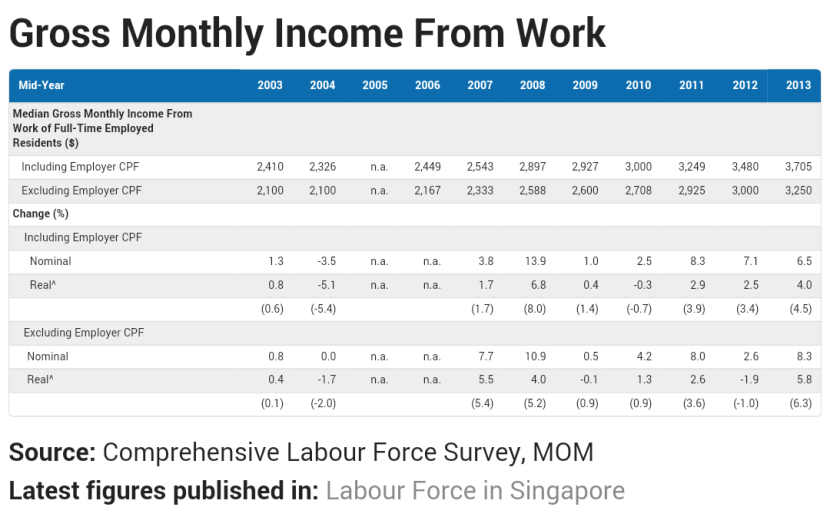 Somehow, the CPF Minimum Sum should maintain its real value but for Singaporeans, the livelihoods that we depend on our wages for don’t need to be maintained? Is that what the government is saying?

And how are Singaporeans expected to maintain the “value” of the CPF Minimum Sum if the value of our wages are not maintained?

So, that’s for wages.

But what about the CPF payout?

According to the CPF Board, ” Payouts will range from about $350 per month at the entry level to $1,100 per month for those with the full Minimum Sum.”

Also, if the median payout in 2011 is already at a low of only $260, does this mean that for most Singaporeans today, most of us will only be able to get a very low payout of $350?

This would be even lower than the stated $350!

So, hold on a minute! The government wants to increase the CPF Minimum Sum to keep more of our retirement savings inside because they say that they want to “maintain its real value”, but so what if all that money is kept inside and has some “real value” (whatever that means).

As I’ve said, the government claims that it wants to “maintain” the “real value” of our retirement funds, so they make the CPF Minimum Sum increase by leaps and bounds, even way over inflation, just to maintain the “real value”. Sounds like such a magnanimous government, right?

So, when the government talks about “maintaining the real value”, whose real value are they talking about?

But as it stands, we have been receiving as low an interest rate of 2.5% since 1999. According to Mr Leong, the CPF interest rate (actual and real) that Singaporeans earn is the lowest in the world!

In fact, you can see that over the past few years, inflation has been growing tremendously but the CPF interest rate has remained at a low of 2.5%. This means that the real value of our CPF is actually being eroded!

Do you see all the contradictions? I hope you can see them.

Now, let me give you the big picture, before we round off.

Do you know why the government wants to maintain the “real value” of the CPF Minimum Sum. Well, here you go – do you know that Singapore has the 8th largest pension funds in the world?

Huh? Really? Doesn’t seen so, leh, you say? You are right. That’s because Singaporeans also have the least adequate retirement funds among the developed countries and one of the lowest in the world.

Then why do we have such a massive CPF balance of $254 billion? If this money is not going to us, where is it going? In fact, last year, Singaporeans only withdrew 5.9% of the CPF balance. Where did all the rest of our CPF go? 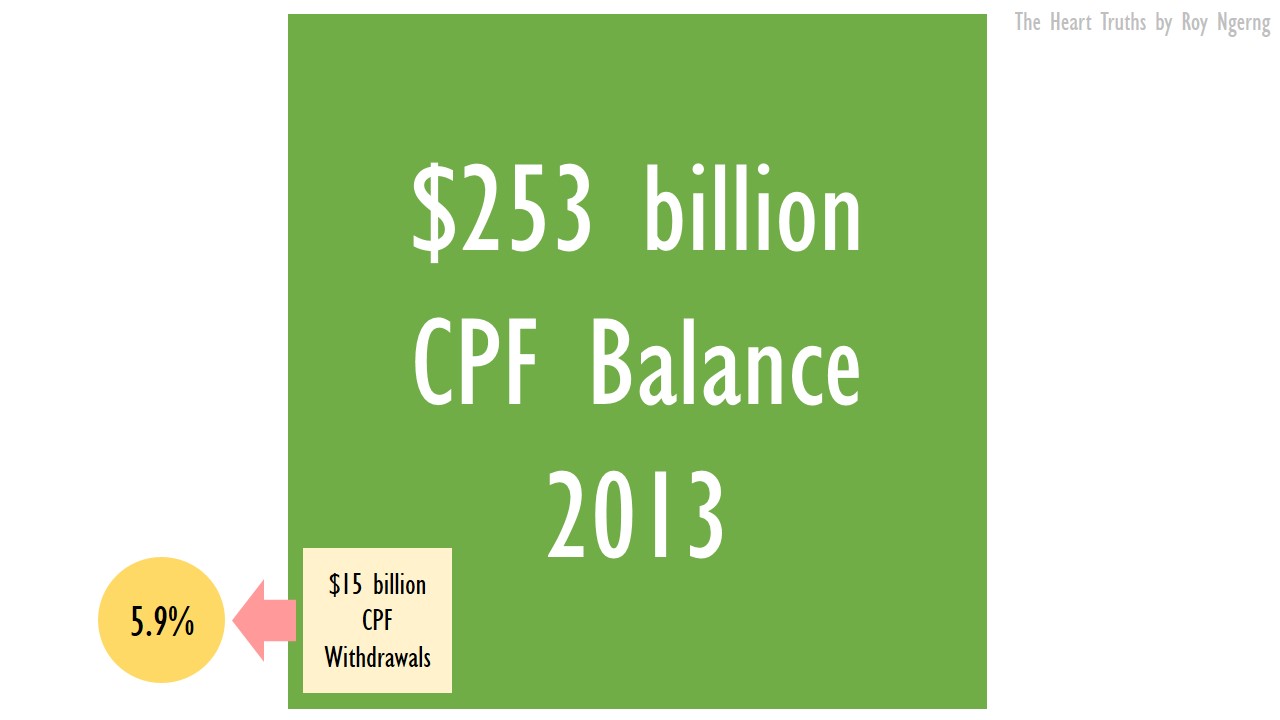 The other question you have to ask is this – if the government wants to set such a high CPF Minimum Sum to keep our money away, where are they siphoning it off to?

Now, do you know why the government gives you a low 2.5% interest on your CPF? The rest of the interest is being earned by them and not given back to you – Temasek Holdings and GIC earns 16% and 6.5% respectively.

Finally, let me give you the whole picture. By right, if you have a responsible government which will take care of you, this is what a government will do:

How, has the government done any of this? None. Nothing. The government did none of this. In fact, the PAP has depressed the CPF interest rates, depress your wages and reduce the CPF payout to as low a level as they can give you.

Doesn’t take a genius to understand what is going on in Singapore and what the PAP has done, isn’t it?

So, the question is – if the PAP doesn’t care for your retirement, or your livelihood for that matter, what does the PAP really care about? Well, many people have come to their own similar conclusions, and we are not too far off. The PAP doesn’t care. They have hijacked government for their own purposes and their own wealth. Your wealth is inconsequential to them. In fact, your wealth is an irritant to them.

Let me make this very clear – for the government to claim that they want to “maintain the real value” of your CPF but yet would depress the CPF interest rates and not return us what our CPF has helped to earn, would depress our wages and would pay us as little as a $250 CPF payout which is clearly adequate, and yet the only thing that they would do is to increase the CPF Minimum Sum, isn’t just a case of misplaced priorities.

In short, the PAP doesn’t care. Whether you retire or not is none of their business. Whether you are able to live adequately or have a proper livelihood is none of their business. You exist only to make money for them. And if you cannot, you jolly well try harder or die trying. Don’t even try milking money off me, that’s what they are telling you by the low CPF payout.

In short, the PAP wants to increase the real value of the CPF Minimum Sum because you are of no real value to them. Your worth is only in how much they are able to milk you dry.

You know, the graffiti that was splashed across a Toa Poyah flat rooftop yesterday? This is what it means.

Are Singaporeans frustrated enough to throng the streets to protest against this blatant treachery? Will this finally break us? For too long we’ve pretended or denied, believing that one day, the PAP will turn around and find it within themselves to actually protect the people. Time and again, the PAP has proven us wrong. Time and again, the PAP has gone against us, not once, not twice but too many times. And yet, in the face of rising costs and the harder and harder lives people live, the PAP went full steam ahead to increase the CPF Minimum Sum once again, with no shame and guilt. Time and again, the PAP keeps taking more and more of our money, all the time giving us lesser and lesser. But Singaporeans have been patient and Singaporeans have been kind, for we are respectful people. But perhaps the time has come for it to let rip. Perhaps the time has come for us to finally give it to them and show them who we truly are. Rogues they are dividing our land and stealing our lives. Are we going to continue to let them?

The signs are there. Things are breaking. Are we facing up to them? Are we standing up to unite? Perhaps it’s time.

In view of the unreasonable increase in the CPF Minimum Sum, we will be organising an event on 7 June at 5pm to call for Singaporeans’ CPF to be returned to us. 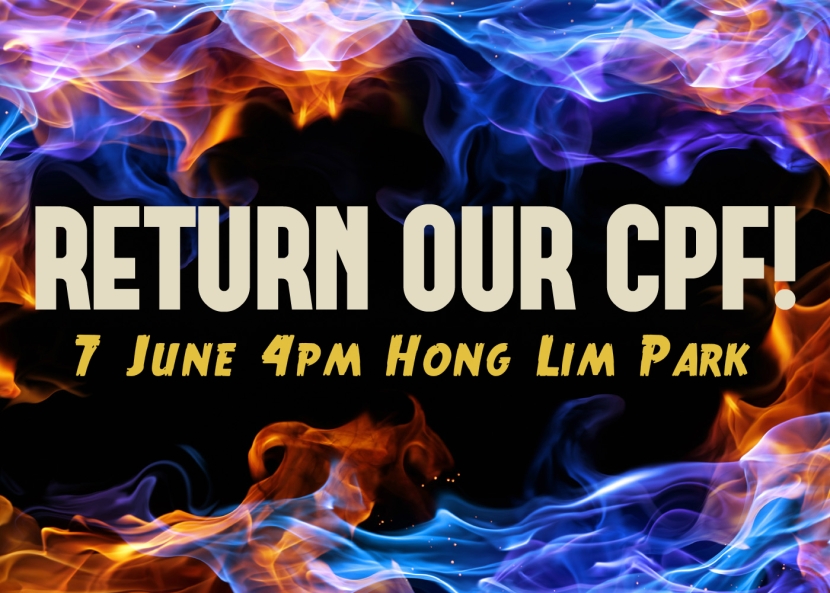 We have also started a petition to the Singapore government to honour our contributions to our CPF and return our CPF to Singaporeans. You can sign the petition here. 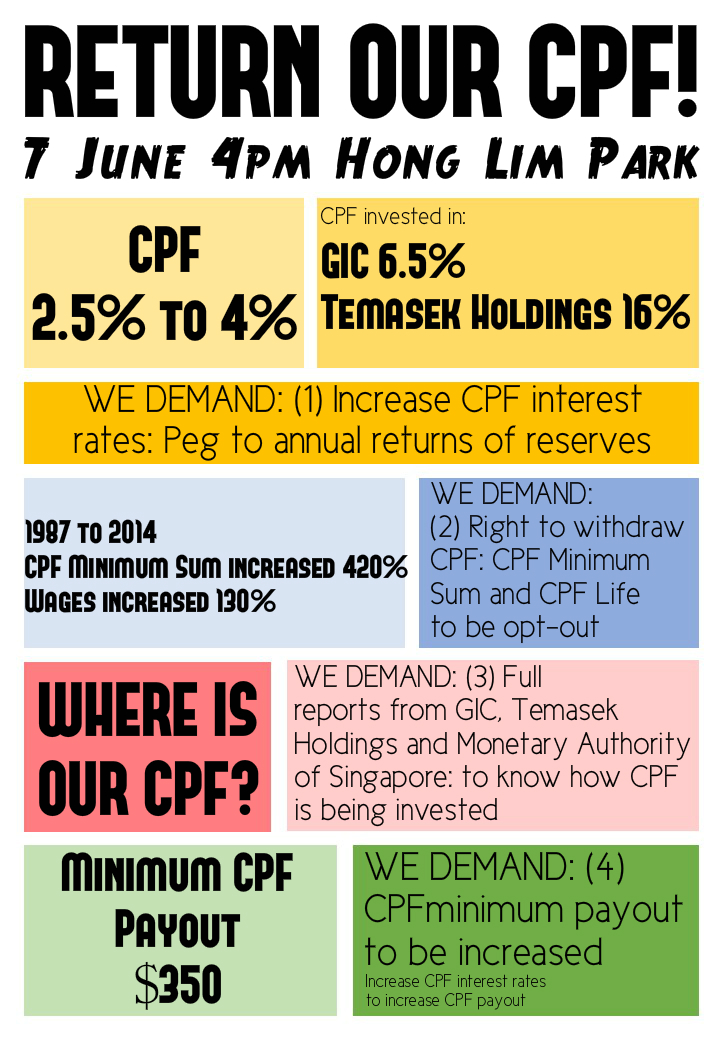