This coming Saturday is the #ReturnOurCPF event. I will be speaking at the event.

Over the past few weeks, I wondered if I should speak again. Does speaking up change things? Will we be able to have more transparency and accountability from the government on how they are using our CPF?

Previously on the GIC’s website, they also said that they did not know how whether they are using our CPF to invest, even though the Board of Directors on the GIC are also the Singapore prime minister, the two deputy prime ministers and two other ministers, or the government itself.

But in June this year, the GIC also suddenly admitted that they know that they are using our CPF.

In fact, I’ve traced evidence on how our CPF is invested in the GIC and Temasek Holdings from the government websites and had written about this in 2012 and 2013. By May this year, the government has erased all the evidence and edited them away.

But in June this year, they suddenly admitted that the CPF was indeed invested in the GIC.

Temasek Holdings then claimed that they do not invest our CPF, but in a book written by an ex-director from the Ministry of Finance, it was revealed that since the 1970s, the CPF was invested in the Temasek Holdings! So, when did the government suddenly stopped it?

Suddenly in June this year, they government was forced to admit. Why did they do so? 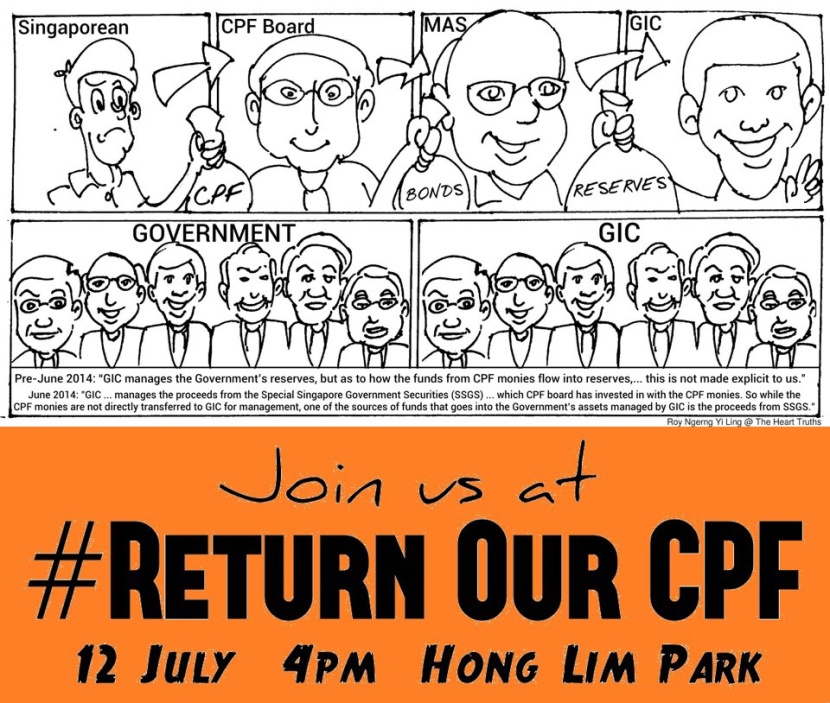 The last #ReturnOurCPF protest was held on 7 June 2014. 6,000 Singaporeans attended the protest to demand to the government for transparency and accountability on how they are using our CPF.

In early June, the government admitted to everything. They had previously not wanted to.

In early June, they had no choice but to admit to the truth.

More information was then admitted to by the Ministry of Manpower and several other ministers.

For the first time, Parliament debated on the CPF at the last sitting, after all the government’s admissions, and will again debate on this issue at the sitting which will commence today.

However, the numerous questions on Singaporeans’ minds are still not answered.

Why are we getting such low interest rates on our CPF, and the lowest in the world?

Why are so many Singaporeans unable to save enough in our CPF to be able to retire?

Why do so many older Singaporeans still have to work as cleaners, security guards and odd-job labourers because their CPF did not grow?

I mean, does the government have the integrity to let our older Singaporeans work until their old age, and some, until their deaths? It makes one wonder, is this how a government should treat the very citizens it should protect?

The government says that because our CPF is not “directly” invested in the GIC and Temasek Holdings, they don’t have to return the interest earned back to Singaporeans. Then the government made the GIC and Temasek Holdings private limited companies, so now there’s no way we can have complete information on what they are doing with our CPF, because they are no longer required to let Singaporeans know in full.

But, without our CPF, will the government even have this money to invest in the GIC and Temasek Holdings? They wouldn’t. At all.

Since the mid-1970s, the interest earned on our CPF has been dropping, and dropping.

Today, if Singaporeans cannot retire, is it because we did not work hard enough or is it because the government did not return us our money? 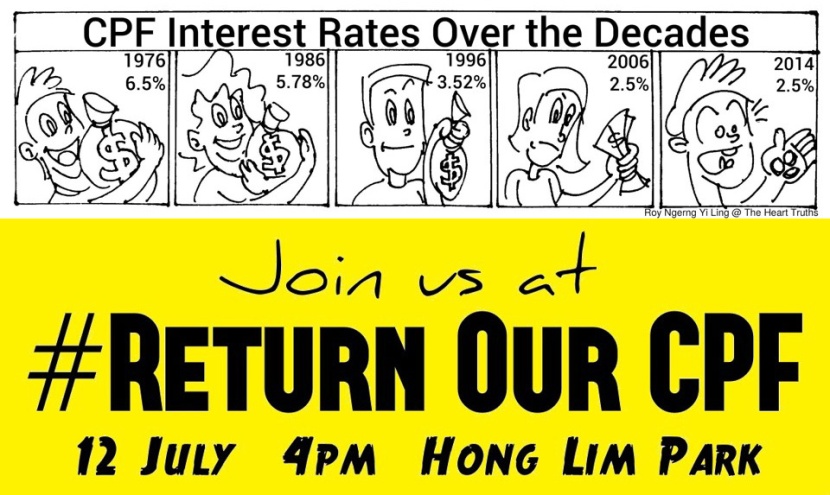 As such, I’ve decided to speak at this Saturday’s event. The greatest revelation and admission by the government all happened in June this year.

Before that, they have never wanted to tell us the truth.

Still, they’ve not apologised. This is a huge matter. For decades, the government has taken our CPF to invest in the GIC and Temasek Holdings and they’ve taken the earnings away from Singaporeans. Leong Sze Hian calculated that the average Singaporean has lost $1.5 million. This is not a laughing matter.

This is not something the government can just walk into, admit to the information and walk away.

Today, Singaporeans cannot retire because we have lost the money which is not returned, because the government has taken our money.

In June, we held the #ReturnOurCPF protest. 6,000 Singaporeans turned up for the largest protest in Singapore’s history since independence.

In June, the government finally admitted to the truth.

But still, they did not apologise. Still, the government did not return the money to Singaporeans.

This Saturday, another #ReturnOurCPF event will be held. Show up, come down, and let the government know you mean business and Singaporeans should no longer be played around with or made a fool.

I will be speaking at this Saturday’s event. If we want to know the truth about what the government is really doing with our CPF and we want justice done, for our government to return our CPF to Singaporeans, then we have to stand up. We have to rise up.

You have to let the government know you mean business.

This Saturday, I will be speaking. We will see you there. It is the right of Singaporeans to speak up and to claim our rightful citizenship.

For our freedom, and our rights, and our children’s and theirs, we have to stand up and fight for it.