On 30 May 2014 this year, the Ministry of Finance finally admitted for the first time ever that they take the CPF of Singaporeans to invest in the GIC. It was reported that, “The CPF Board invests CPF monies in Special Singapore Government Securities (SSGS)” which are “are transferred to GIC to be managed”. The MOF said, “The Government’s assets (which our CPF is part of) are therefore mainly managed by GIC.” 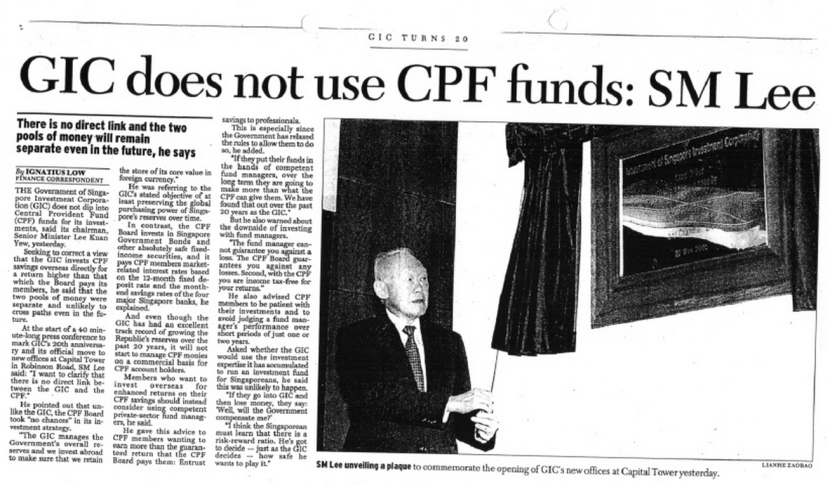 Lee Kuan Yew had also denied this truth in 2006. 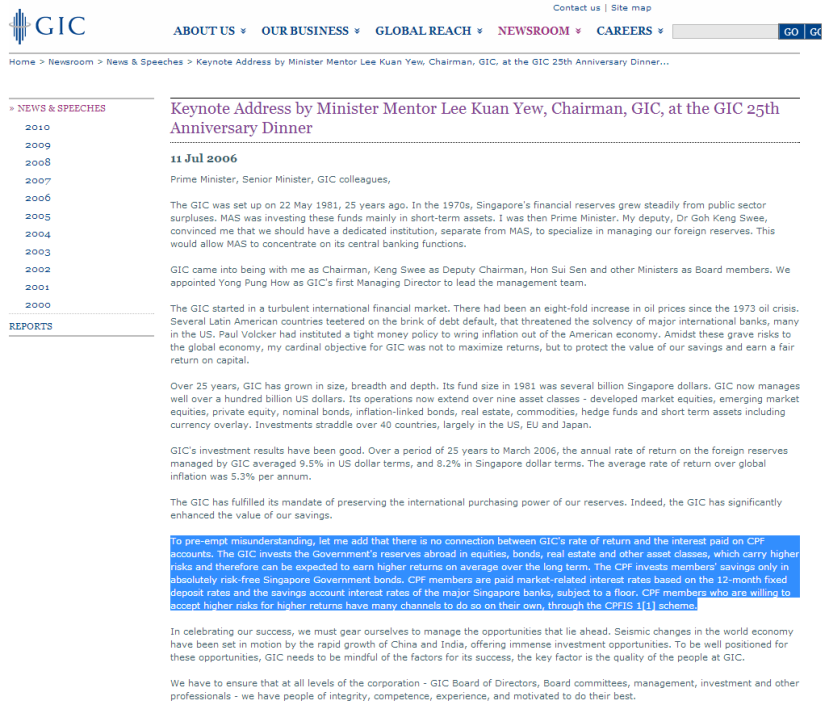 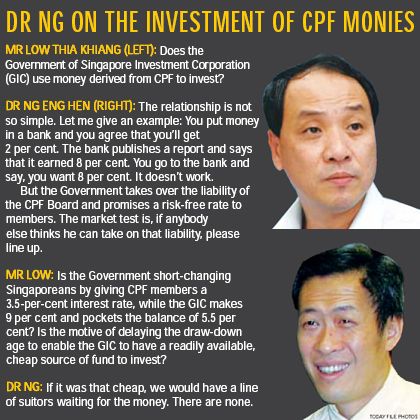 The Ministry of Finance, via a speech by then-Second Finance Minister Lim Hwee Hua, also denied the government’s involvement in the GIC in 2008:

GIC’s and Temasek’s performance are assessed and monitored on the basis of the overall returns of their respective portfolios. Up to now, they have done creditably, with GIC averaging an annual return of 9.5% in US dollar terms over a period of 25 years to March 2006, and Temasek’s Total Shareholder Return (by market cap) since 1974 has averaged over 18% annually in Singapore dollar terms. Both have achieved these good returns because they have professional management teams, drawn from all over the world, and without interference from the Government. They do their jobs with the single objective of maximising the long term returns on their portfolios, without any political agenda whatsoever.

The role of the Government in the investment process is clear. It is to ensure that the right structures, processes, systems and controls are in place to fulfil our objectives. We set our expectations and constraints for the investment agencies, but these agencies make their own independent commercial and operational decisions. Both GIC and Temasek are well regarded in global markets as savvy and reputable long-term investors; and their track records stand as testimony.

Both Mr Singh and Ms Sylvia Lim have suggested that our investment agencies work towards more transparency and accountability. We already have a clear accountability framework in place – and one which has worked well thus far. The Government – as shareholder, in Temasek’s case and as fund owner, in GIC’s case – holds the respective Boards of Directors accountable for delivering good overall financial returns. In turn, the Boards oversee the respective management teams, which are responsible for each company’s investment and operational decisions.

Ms Lim Hwee Hua had said, “It would give others the mistaken notion that the Government influences the individual investment decisions of GIC and Temasek, and will raise even more concerns.”

It is clear that this time has come. There are now “more concerns”.

So, in 2007, the Worker’s Party Mr Low Thia Kiang had asked, “Does the Government short-change Singaporeans by giving CPF members a 3.5 per cent interest rate while the GIC makes 9 per cent and pockets the balance of 5.5 per cent?”

He also asked, “Is the delay in the CPF draw-down age to enable the GIC to have a readily available cheap source of funds to invest?”

It was reported that, “Manpower Minister Ng Eng Hen tried to explain that the link between GIC and CPF was “not so simple”. He also said, “If it was that cheap, we would have a line of suitors waiting for the money. There are none.”

A few days later, Singapore prime minister Lee Hsien Loong said, “Some people say…Government wants cheap money to go and make a profit. We do not have to make cheap money. This is not that kind of government.”

However, in 1983, The Straits Times had reported that, “The CPF  … provided a cheap source of finance for the government. The CPF purchases government stocks, and the government loans the money cheaply to the HDB.” 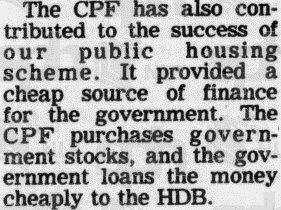 Dr Richard Wong, Director of the Hong Kong Centre for Economic Research, also said that, “It was clear from the very outset that the CPF would make available to government a cheap source of credit for social and economic development.”

He also quoted Professor Lim Chong Yah as saying in 1986 that, “[T]he large sums of money vested with the fund are in effect held `hostage’ to governmental decision-making: ipso facto, this would be acceptable if there is a guarantee that future governments would be as honourable and as capable as the present one, but can such a guarantee ever be forthcoming?”

He questioned the of the integrity of the management of the CPF, asking, “First, it is doubtful that the vast CPF machinery has resulted in a more efficient allocation of resources. Second, one can argue, at least in principle, that the Singapore CPF has probably resulted in a society where most people are more equal, except for the gap between the rulers and the ruled.”

Ex-Finance Minister Richard Hu had once said Singapore’s reserves belong to the people.

Ho Ching, CEO of Temasek Holdings, had also admitted that, “While the Minister for Finance (Incorporated) is our formal shareholder, we recognise that the ultimate shareholders of Temasek are the past, present and future generations of Singapore.”

Singapore Management University Practice Associate Professor of Finance Benedict Koh was thus reported to say that, “As GIC and Temasek manage the country’s reserves,… Singaporeans are their shareholders ultimately and hence are entitled to dividends.”

Then, Singaporeans, where is our money??

In fact, it is thus problematic that the government has made so many denials about taking our CPF to invest in the GIC for so many years now, when the government is on the GIC’s Board of Directors! 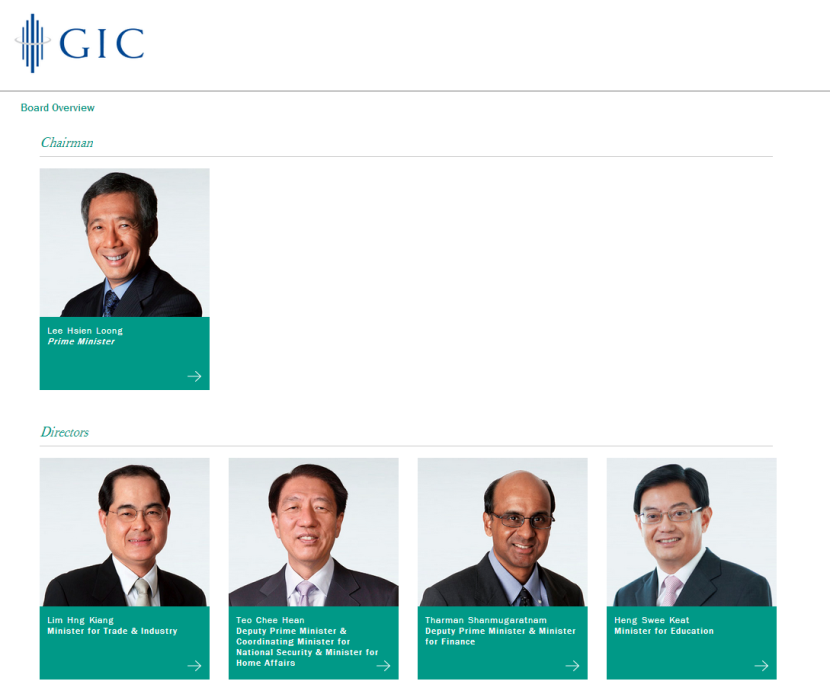 And the GIC is the government! 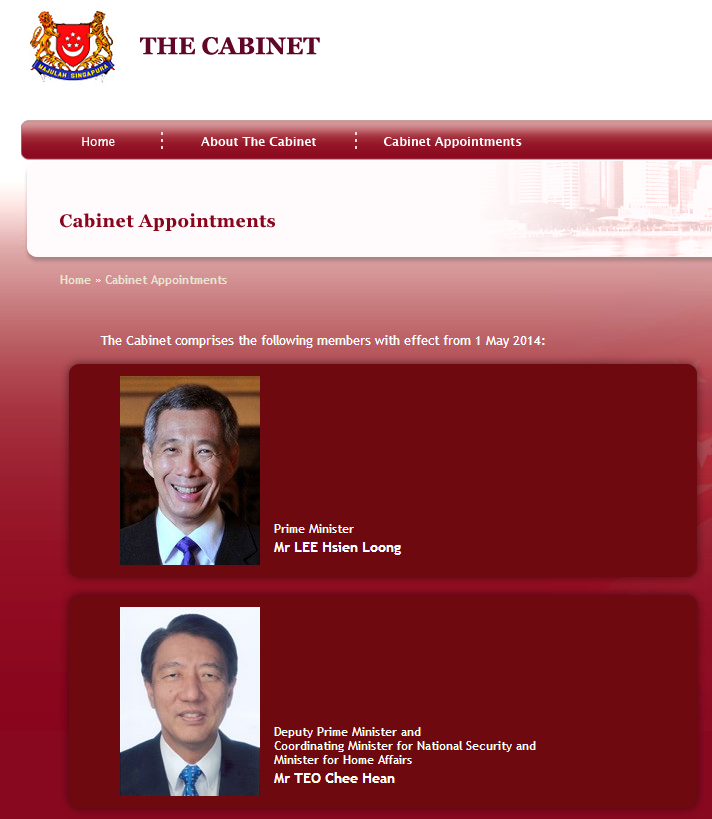 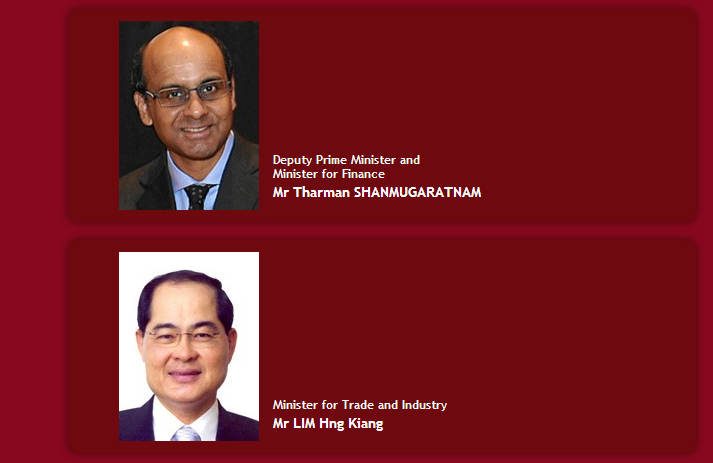 In fact, from 2010, one of the GIC’s Board of Directors was also a Board Member on the CPF Board in 2009! What is going on here?? (Today, he is on the Board of Directors at Singapore Exchange, OCBC Bank, Great Eastern Life, Singapore Labour Foundation and Economic Development Board Investment.) 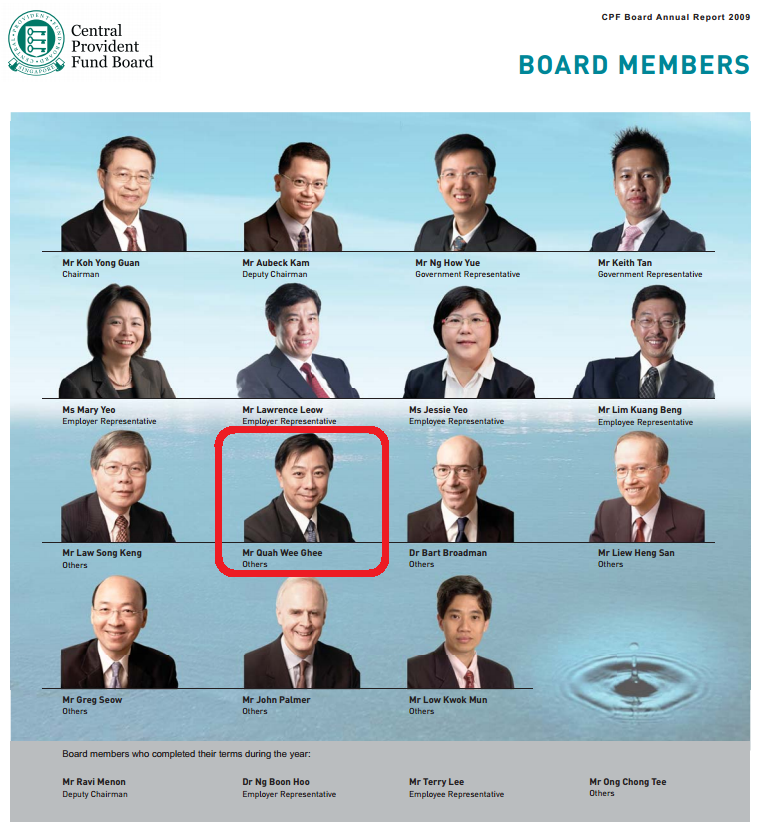 Last week, the government claimed that income inequality has been reduced in Singapore.

However, as I had written earlier this year, the government has actually been reporting lower and lower Gini coefficients over a period of more than a decade (a measure of income inequality) in each subsequent income trend report. Is the government artificially pushing down income inequality, because they want to make things look better than it really is? 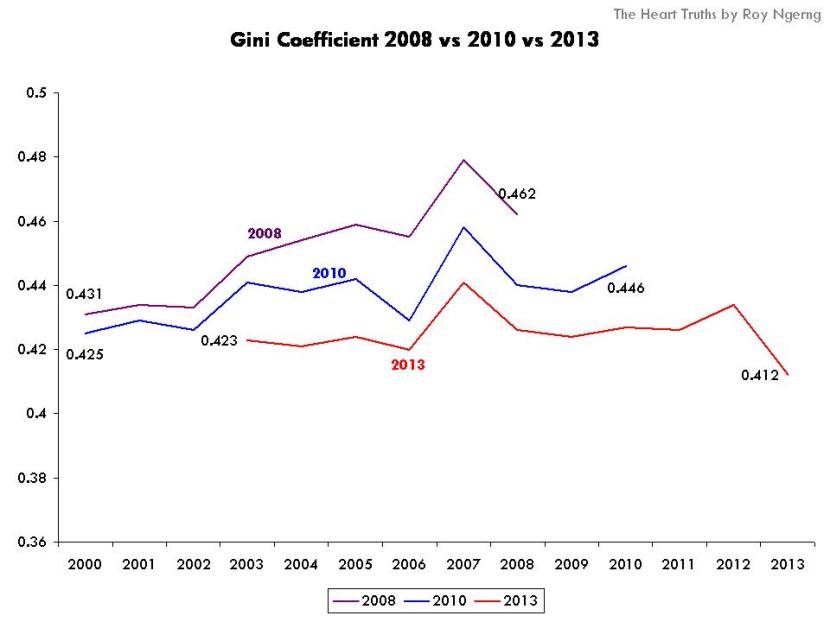 Can you see now, how the “Singapore CPF has probably resulted in a society where most people are more equal, except for the gap between the rulers and the ruled”?

When Professor Lim Chong Yah had cautioned in 1986 about how “future governments would (need to) be as honourable and as capable as the present one, but can such a guarantee ever be forthcoming?”, did he foretold the future today?

Singaporeans, you have your answer now. This is your money that they are toying around with.

What would you do now? 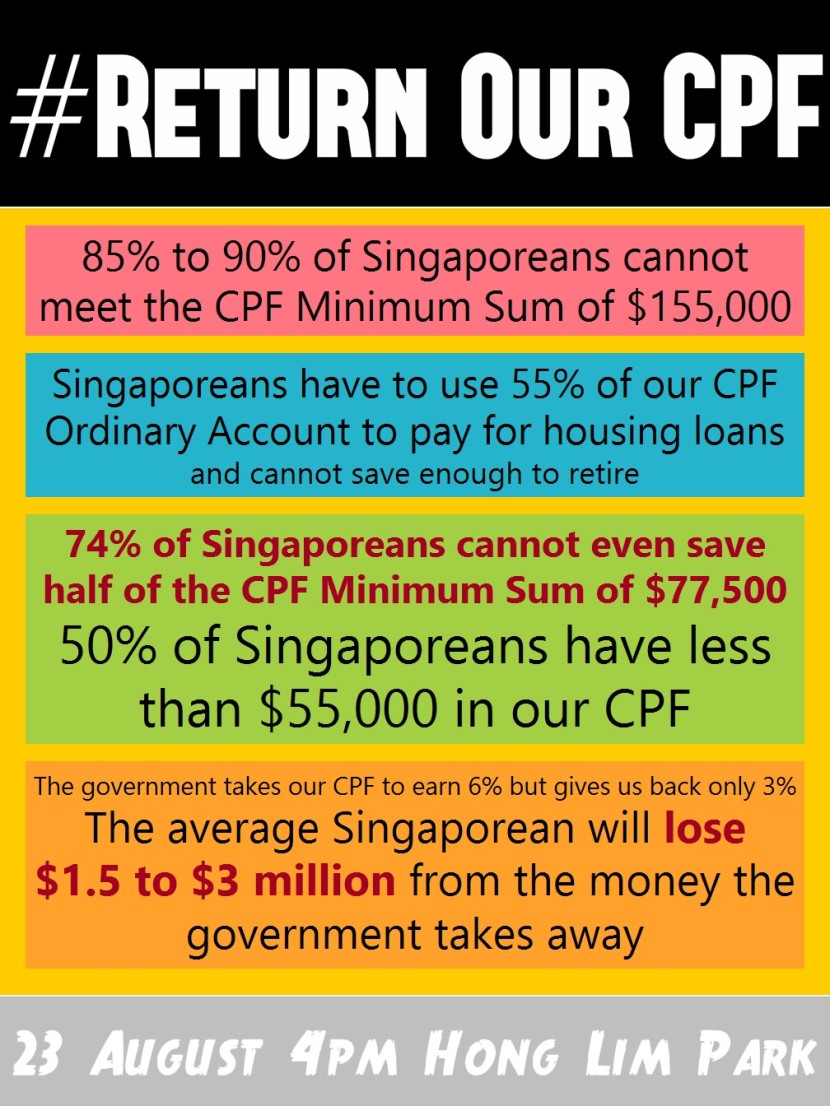 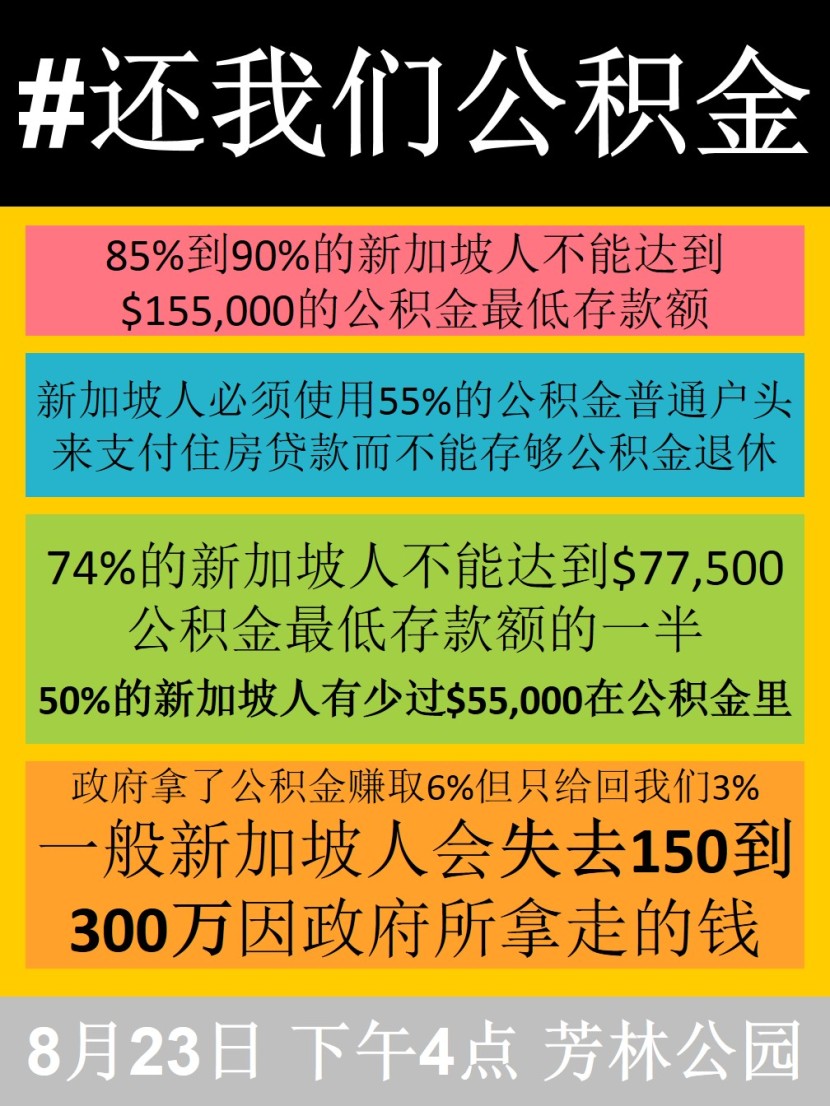