I am very confused now. So how much does the government think is enough for Singaporeans to retire on?

Manpower Minister Tan Chuan-Jin said last month that the government “wanted the (CPF) Minimum Sum to be able to meet the expenditure needs of a lower-middle income retiree couple.”

Again, he said that, “This is estimated to be what a lower-middle income retiree household requires to meet their basic daily needs.”

So, does the government think $1,200 is enough for retirement?

However, at the National Day Rally last Sunday, Lee Hsien Loong had asked the audience how much they would need to retire on. 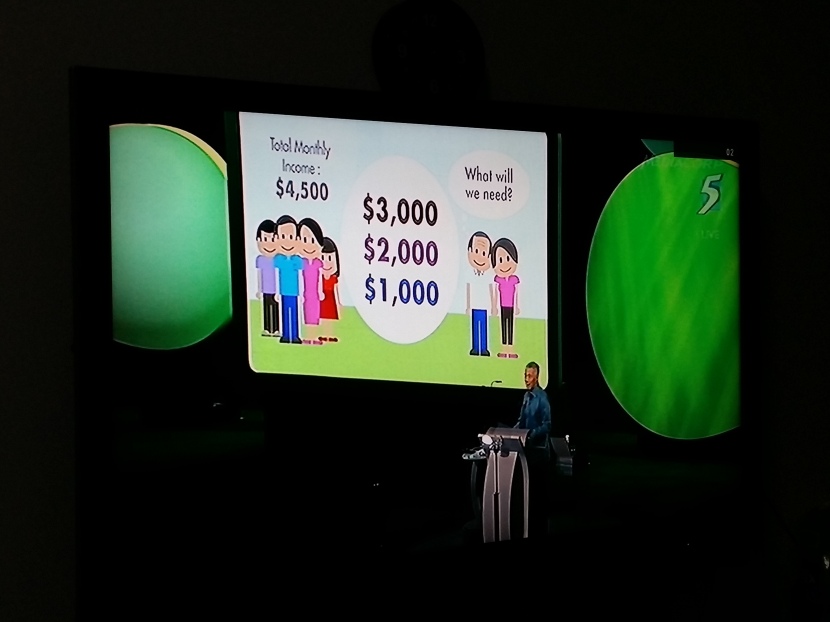 When he asked the audience to raise their hands, I thought there were more people who said they needed $3,000 to retire on.

Then, he went ahead to present his prepared slides using the $2,000 figure.

So, does this mean the government thinks Singaporeans actually need $2,000 to have enough for retirement? 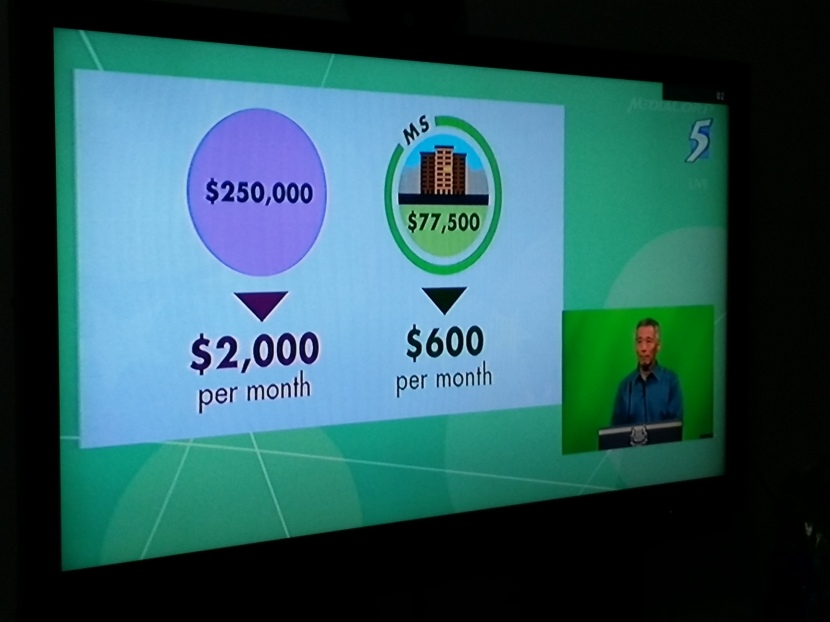 Associate Professor Hui Went Tat pointed out that if a person could only withdraw $600, this would mean that a person would “not hav(e) enough retirement savings“. Indeed, I had estimated that 73.5% of Singaporeans do not even have $77,500 inside our CPF in cash, which means that nearly three-quarters of Singaporeans would get less than $600. 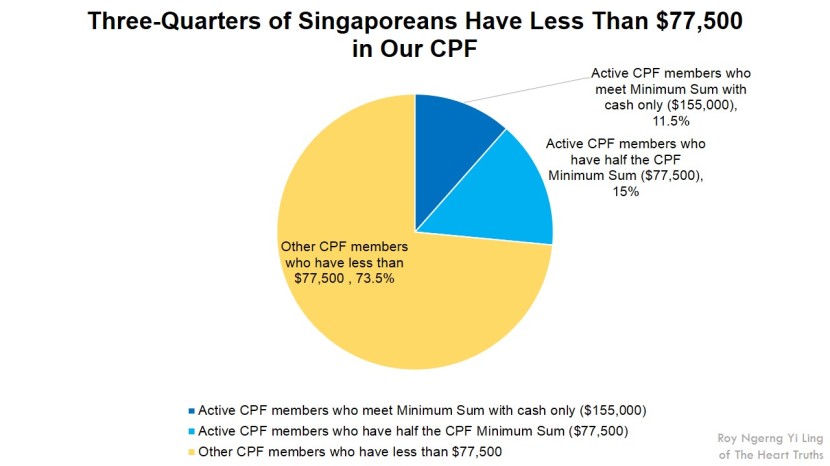 Lee Hsien Loong then said that the Lease Buyback Scheme could give the person another $900, which as Prof Hui also pointed out, would give “a total of $1,500 a month which will be below current subsistence living level“.

So then, does this mean the government thinks $1,500 is enough?

I am getting very, very confused here. How much exactly does the government think is enough for Singaporeans to retire on?

According to Prof Hui, he said, “The $2,000 retirement income projected for Mr Tan, if paid out today, would therefore put him in this group of households with an income considered to be enough for basic or subsistence living… And with inflation, the real value of the $2,000 Mr Tan is due to get in 10 years’ time would be even more paltry.”

The Press Secretary of the Minister for Manpower Ms Chong responded to Prof Hui by saying that, “The worked example of the hypothetical Tan family was not meant to show that $2,000 per month will definitely be sufficient for retirement.”

She added that, “$2,000 was the majority view of the audience, but for each individual, the actual figure would come down to a matter of personal needs.”

So, does this mean the government acknowledges that even $2,000 might not be enough for retirement?

I am certain that there were as many people who raised their hands at $3,000, if not more people, so I am not sure if her conclusion is reflective.

Also, was it not Lee Hsien Loong who had prepared his presentation based on the $2,000 figure? If so, would it not be that the government which thinks that $2,000 is enough?

It is even more worrisome when Ms Chong said, “The fact that most eligible home owners have not taken up the Lease Buyback Scheme may well be a positive sign that most seniors do in fact have other support, and are adequately provided for in retirement.”

Which statistics did Ms Chong based this assumption on?

I had calculated that 73.5% of Singaporeans do not even have $77,500 inside our CPF, which means three-quarters of us would only be able to withdraw less than $600 every month, which as Ms Chong pointed out, is “much less than the $2,000 per month he would need.”

If so, the government would know that the majority of Singaporeans simply do not have enough inside our CPF for retirement at all!

Then, why this frivolous statement?

Based on the above, then why is the government not helping Singaporeans to grow our CPF to ensure that all Singaporeans are able to withdraw at least $2,000 every month from our CPF?

As Prof Hui mentioned, “priority should be changes to ensure that savings are sufficient for retirement. Attention has to be put on the savings accumulation stage, not just the withdrawal stage.”

Indeed, to do so, Leong Sze Hian and I had calculated that the government needs to implement a minimum wage of at least $1,500 and increase the CPF interest rates to 6% to grow Singaporeans’ CPF. And this can be easily done since our CPF is invested in the GIC which is earning an estimated 6%. 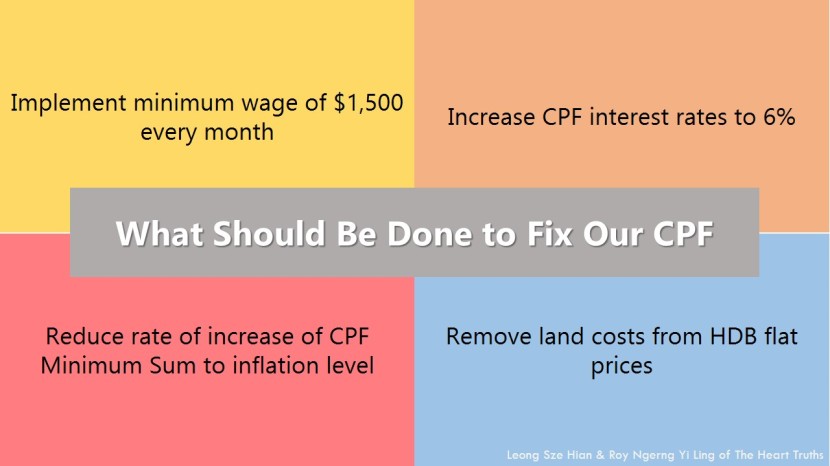 Ms Chong also said, “CPF and home ownership work hand-in-hand to provide for Singaporeans in retirement. The Government helps citizens to own their homes, and pay for them using their retirement savings in the CPF, so that the home can be a nest egg for them to draw upon in old age.”

But I am very perplexed.

Minister for National Development Khaw Boon Wah has admitted that, “we control the (public housing) construction programme; secondly, we set the price (for the HDB flats),” Also, today, “Land now makes up about three-fifths of development cost on average, up from two-fifths in 2008.”

Also, Gerald Giam had questioned the Minister for National Development Khaw Boon Wah, where it was revealed that, “Like all leasehold properties, HDB flats will revert to HDB, the landowner, upon expiry of their leases. HDB will in turn surrender the land to the State.”

When Singaporeans are not able to retire because we have to use too much of our CPF to buy over-inflated flat leases, should it not be the responsibility of the government to set the prices of these flats at a more affordable level, instead of charge high prices now and then ask us sell back the lease later on (and make us feel insecure as to whether we would still have a home to live in when we grow older)?

If the government has enough money to buy back the leases, then are they not already charging too high prices for the flats and earning profit?

Maybe it is time the PAP government stand up with some moral integrity and responsibility and decide once and for all – does it want to continue to make money off Singaporeans from our CPF and HDB, or is the government keen at all to help Singaporeans really own our homes and be able to retire?

And if the PAP is not interested in protecting Singaporeans, then maybe it is time Singaporeans recognise this, do the right thing to protect ourselves, and vote in a new government which will at least listen to Singaporeans and protect us.

Come down to the #ReturnOurCPF protest tomorrow at 4pm at Hong Lim Park. You can join the Facebook event page here.