Dear Singaporeans, I will make this article short – just a few charts and you will see how we are being cheated of our wages.

Indeed, Singapore has become the most expensive place to live in, in the world.

Indeed, Singapore is today one of the richest countries in the world (by GDP per capita) and the most expensive, so one might expect Singaporeans to also earn one of the highest wages.

However, in a survey that Gallup did at the end of last year, it was found that among the top 20 richest advanced economies, Singapore has one of the lowest self-reported per-capita household income!

Not only that, when you compare how much the lowest-wage Singaporeans earn as compared to the other countries, Singaporeans also earn the lowest wages! The PAP government has refused to set a minimum wage to protect Singaporeans but the $1,000 they are finally willing to give to cleaners can be seen as a de facto minimum wage. But even then, this is only $1,000. 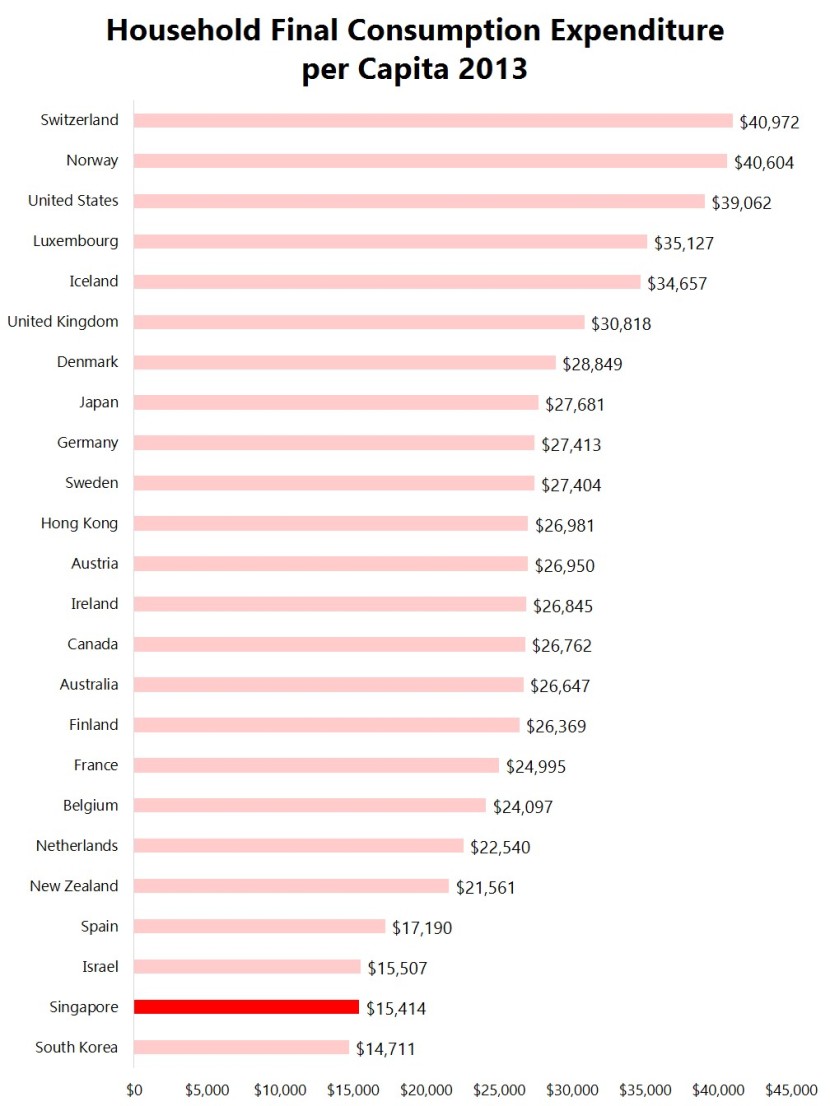 In a study published by the World Bank earlier this year, it was shown that countries with higher minimum wages also have higher productivity. 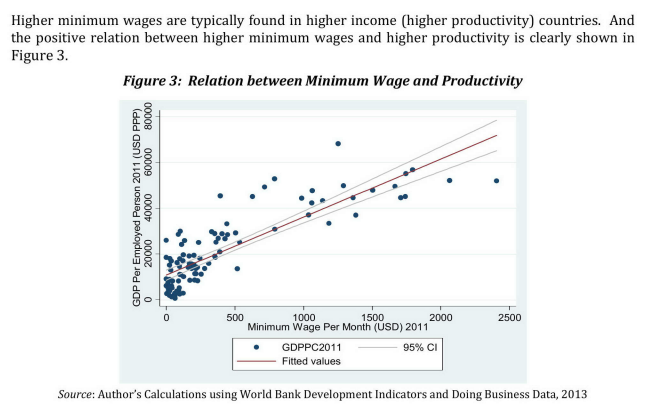 Indeed, because Singapore has the lowest wages paid to low-wage workers, Singapore also has one of the lowest productivity among the top 20 advanced economies.

And along with it, Singaporeans also have to work the longest hours in the world, which together with the lowest wages, contribute to one of the lowest productivity levels. 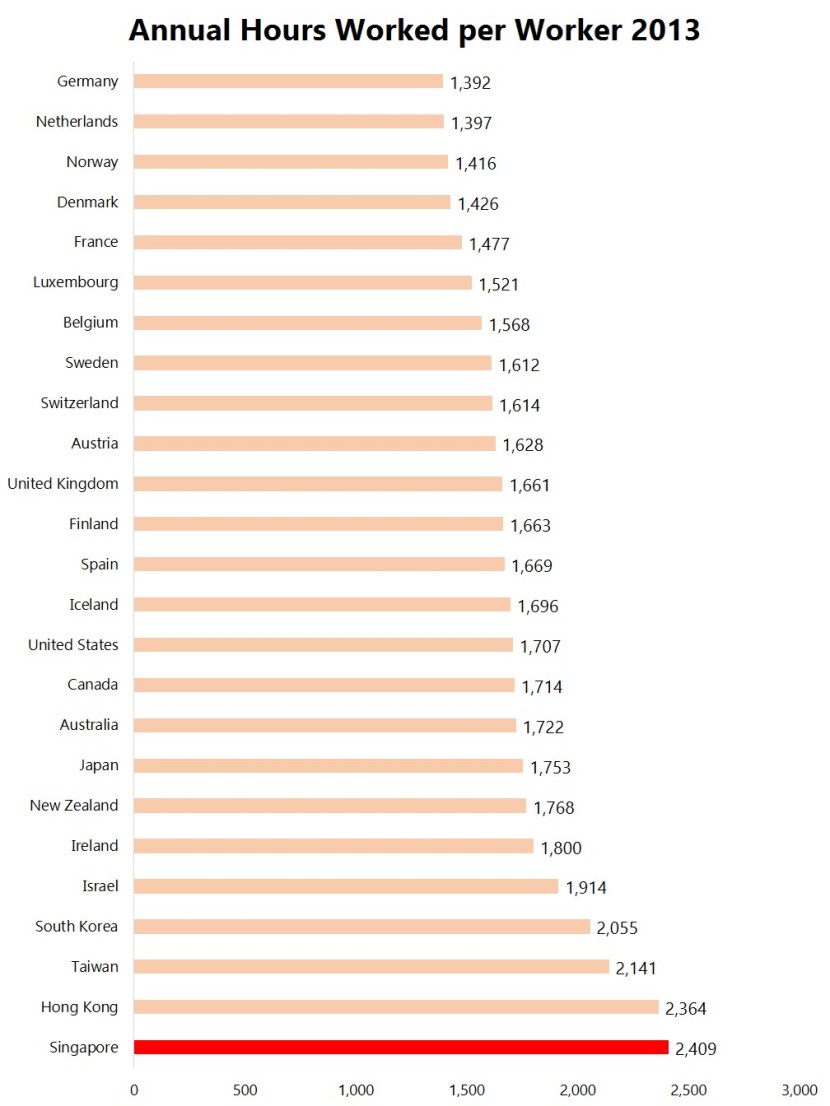 It has also been shown by the Luxembourg Income Study that the higher the median income, the happier people will be.

Again, also because Singapore has one of the lowest median income, this squeeze has led to Singaporeans becoming one of the most unhappy people in the world.

But do you know that even though PAP forces Singaporeans to earn low wages and work long hours, when it comes to their own salaries, it is a completely different story?

Indeed, we do have a First World economy, First World costs and First World salaries! But only PAP gets to have their cake and eat it – but why not, they control everything. And you have allowed them.

You already know that the PAP ministers earn the highest salaries in the world among their peers. But do you know that among the CEOs in the advanced economies, the executives in Singapore are also paid the highest?

In fact, a report earlier this year also revealed that the executives in Singapore are the highest paid in Asia, even though Singaporeans earn the lowest wages among the Asian advanced economies. 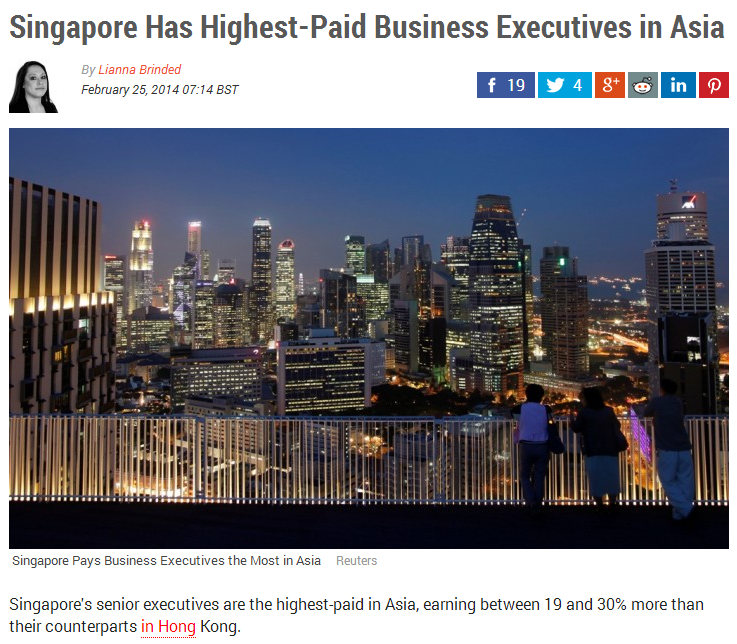 It was reported that, “Pay levels there at senior management (in Singapore) outstrip those of Japan and, more so, Hong Kong. Indeed, across the board, remuneration levels in Singapore exceed those of Hong Kong – by 14% at senior executive level, and 34% for top management.”

And in another report by The Economist earlier this year, Singapore was ranked 5th on the crony capitalism index, as being the 5th easiest place in the world for a person to get rich if they are politically-connected.

Now, the official reason given to explain how executives are paid such high salaries in Singapore is because “Growth in private banking in Singapore and its development – or regeneration – as a regional hub for international companies has drawn a lot of high-level talent to the city and that’s reflected in the C-suite compensation.”

Take a look at the 5 highest paid CEOs in Singapore last year. 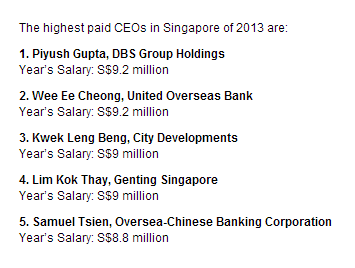 The banking families in Singapore happen to have a very long history in Singapore that spans generations. They are also the highest paid in Singapore.

Today, Singapore has the widest gap between the richest 20% and the poorest 20% among the advanced economies. This has resulted in disasterous social effects, as I have written.

Now, if Singapore has such a high GDP per capita, then where did it all go? Why are our wages still so low, when PAP has unilaterally increases prices and the cost of living in Singapore to being the highest in the world?

Of course, on their highest salaries in the world, it is very easy for them to pay for everything that they need and want, but this has resulted in the rest of Singaporeans having very low consumption expenditure because we simply cannot afford to even just pay for what we need!

It is such a pity that because the PAP makes us believe that our worth is of so little value, that even our graduates have very low expectations of how much they should be paid.

It is wrong for the PAP to only want to retain high salaries for themselves and pay themselves so exorbitantly but would make Singaporeans feel less worthy, so that they can pay us low wages. As can be seen here, for the cost of living in Singapore, Singaporeans are severely underpaid – we are being cheated of our wages.

For the Future of Singapore, the PAP Has to Go

To me, the choice is clear. We have to stop the PAP in their tracks. They have hijacked government for their own devices. And Singaporeans are being cheated of our wages, but most importantly, our livelihoods. Most Singaporeans don’t want to live an extravagant life. But we want to be able to survive, and to live properly. It is clear that the PAP does not even want to let Singaporeans have that.

The most expensive place to live in, in the world, but the lowest wages, not even a minimum wage and the lowest consumption. Yet, they pay themselves the highest salaries so that they can still afford their own standard of living that they want and have created for themselves in Singapore.

What we want are not a few people who convert Singapore into their own playground, while the rest of us become their toys. Lee Kuan Yew had once said, “You know, the cure for all this talk is really a good dose of incompetent government… your jobs will be in peril, your security will be at risk and our women will become maids in other people’s countries, foreign workers.”

What difference does it make when Singaporeans have become maids and foreign workers in our own country? Is this then due to an incompetent government which can even cause Singaporeans to lose our sense of home? Or is this due to a government which wants to enrich itself, at the expense of its people whom it has so heavily devalued?

Come down to the #ReturnOurCPF 4 protest on 27 September 2014 at 4pm at Hong Lim Park. You can join the Facebook event page here. 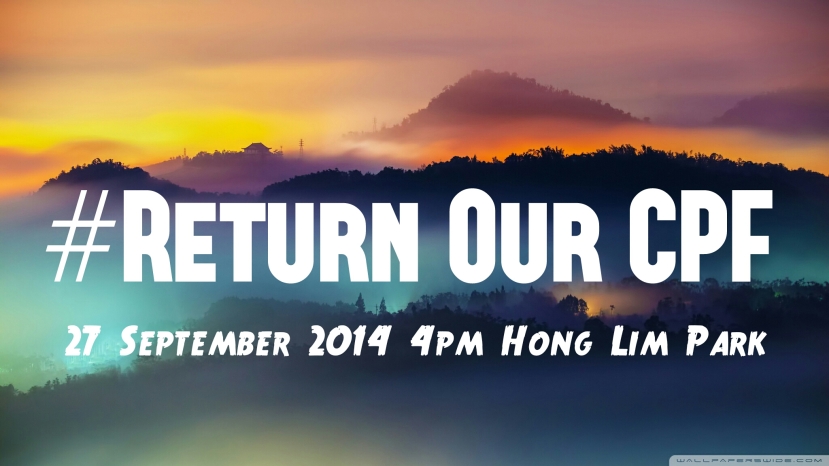