I am sitting in Drew and Napier’s office now as I am writing this. I am here to make payment for the $29,000 that I have been asked to pay the prime minister Lee Hsien Loong’s lawyers for the summary judgment for the defamation suit.

But Drew and Napier does not want to accept the money.

Let me clarify on the payment of the $29,000 in costs to the prime minister’s lawyers.

(1) On 12 January 2015, the court ruled that I have to pay $29,000 to the prime minister’s lawyers from Drew and Napier for costs and filing fees for the summary judgement that was held last year:
https://thehearttruths.com/2015/01/12/judge-ruled-that-i-have-to-pay-prime-ministers-lawyers-20000-hearing-on-damages-not-yet-fixed/

(3) On the very same day, on 22 January 2015, I brought $29,000 in cash to Ravi’s firm and received a receipt for it. The payment would be made by Ravi’s firm to Drew and Napier:
https://thehearttruths.com/2015/01/29/my-receipts-for-the-funds-used-for-the-defamation-suit-now-will-the-pap-be-transparent-about-the-cpf/

(8) Drew and Napier also said in the latest letter that payment has to be made by 9 February 2015, which otherwise they will serve an application to ask for further costs. No where in the letter did it indicate that Drew and Napier was checking with Ravi if I could make payment directly, as Angel had claimed.

(9) I am still awaiting confirmation from Drew and Napier as to when I can go down personally to make payment to them for the $29,000. As yet, Drew and Napier has not wanted to make an appointment with me.

(11) Drew & Napier has refused to meet me face-to-face. Instead, the prime minister’s press secretary, Ms Chang Li Lin, has again taken to the state-controlled media to issue a statement. Ms Chang said that, “under the lawyers’ professional rules, a lawyer cannot, without the consent of the opposite party’s lawyer, deal directly with the opposite party”. The Straits Times also reported that, “If this deadline is missed, the law firm will file an application in court “to compel payment and for costs”, Ms Chang said.”

“If that order is granted and payment is still not made, Mr Lee will avail himself of his legal remedies,” Ms Chang said.

(12) Now, I have been sitting at Drew & Napier’s office for more than an hour but no one from Davinder Singh’s office has come to see me. They asked their receptionist to speak to me if I have any questions. I then had to write down my questions on a piece of paper to ask Drew & Napier. 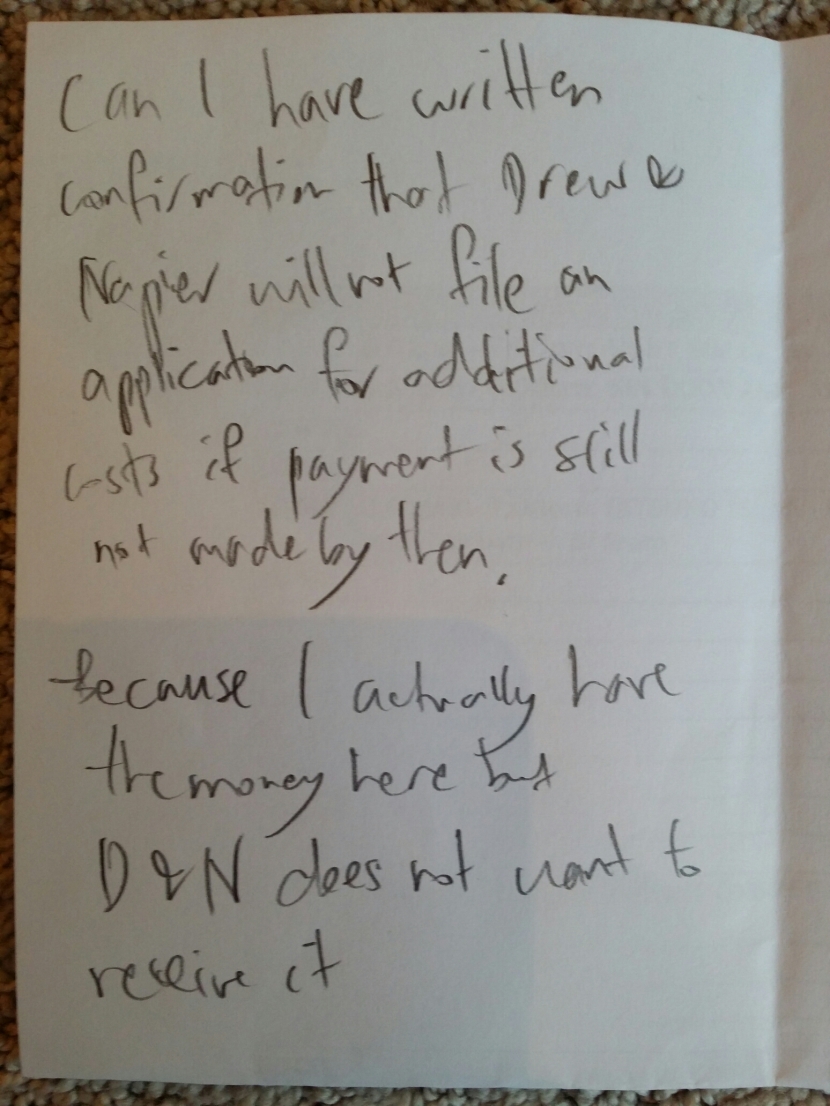 I said that I have brought along the $29,000 but it is Drew & Napier which does not want to accept the cash. I also asked if I can have written confirmation that Drew & Napier will not file an application for additional costs if the payment is still not made by Monday.

Obviously, I have the cash in hand but it is Drew & Napier which does not want to accept it.

I do not know what game Drew & Napier and the PAP are playing again. None of their lawyers have the courtesy to come down to speak to me even though I am sitting in their office for 1 1/2 hours. Instead, the prime minister’s press secretary took to using the state-controlled media to issue a statement.

Once again, the prime minister’s press secretary crossed the boundaries and replied on the defamation suit, even though she is not allowed to do so.

I do not know what to do now. Drew & Napier does not want to take the money and is threatening to sue me to ask for more costs.

But I am sitting here with the money! It is Drew & Napier which does not want to accept it.

Finally, I called Angela from Drew & Napier again. I was given this number from the receptionist. Angela took the call. I told Angela that I am at Drew & Napier waiting to make payment. I asked Angela what recourse I would have since Drew & Napier is refusing to take my money.

What am I to do now? I am here with the money to give to Drew & Napier but they refused to take it. They won’t come down to meet me even though I am at their office, and when I called them, they slammed down my call. And now, they are threatening to sue me to ask for additional costs because I didn’t pay, when I have already bought the money to make payment.

Are they trying to set me up again? Why is the PAP trying to using their bullying tactics against me again?