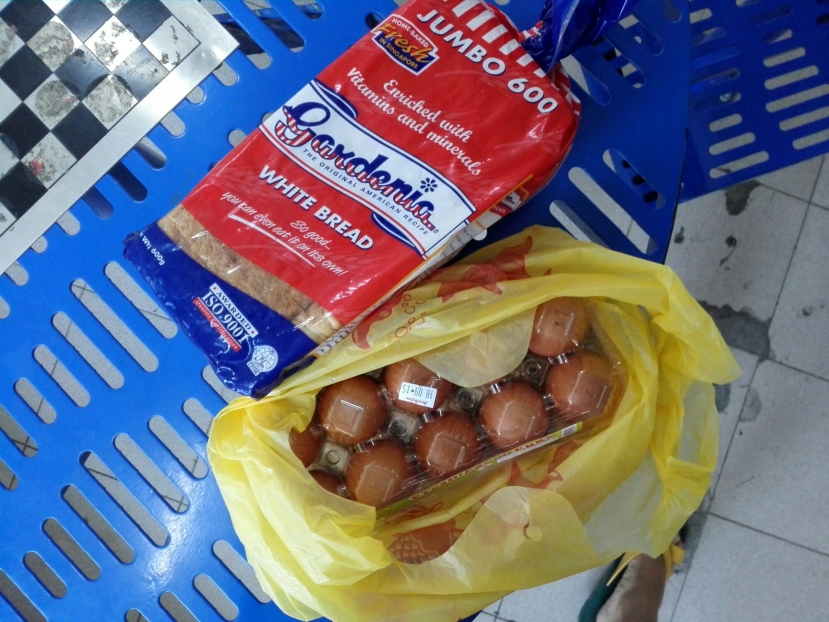 A friend who makes regular food deliveries to low-income families asked if I could assist to bring some food for one family in Ang Mo Kio.

Her volunteers and her make weekly deliveries to the families but one family has ran out of food.

The mother in the family has difficulty holding a job as she has young children who needs to go to school, among other matters. She is also on social assistance but the amounts are low and not enough to support the family.

The family thus has to also rely on donations.

But her story is not unique. There are many such stories in Singapore. Sometimes, big families are cramped into one room flats simply because they cannot afford to rent or buy a bigger place.

And it is not a fault of their own. Some of these families comprise of elderly members who can no longer work, or disabled members as well, which means caregivers might not even be able to work. Some of them work several jobs but because their pay is so low, they simply cannot earn enough for the family. Sometimes, it is challenging for the breadwinner when he or she also has to take care of a family member who needs regularly care.

These families shoulder heavy burdens which we may not see or understand.

How can we help these families?

There are many help groups and religious groups who provide free food and also financial support sometimes. But such assistance is not regular. For example, food is provided only once or twice a week. But these groups continue to do what they can.

But Singapore is a very rich country today, at least on the national level. However, much of this money does not go back to Singaporeans, especially to these low- and middle-income families. Do you know that the share of wages (of the GDP) that goes back to Singaporeans is the lowest among the developed countries?

First, this requires a fundamental mindset change by the government. The government has to recognise that low-income Singaporeans are not in their state because they deserve it. It is not true that they are not hardworking. In fact, many of them hold several jobs but because each job pays so little, they simply cannot earn enough for the family to make ends meet.

Also, the government has categorised certain jobs as being less skilled and thus deserving of lower pay, but where is the limit to such thinking and who are we to demean the labour of another?

As such, to be able to provide assistance to low-income families on a sustainable basis, the government’s mindset has to change.

There is enough research which shows that where low-income families receive more financial support, they will invest in the education and healthcare of their family members, lives will improve which in turn will allow working members in the family to focus on their jobs, do well, and earn more.

As such, a sustainable system to alleviate poverty in Singapore would be to increase the wages of low- and middle-income workers, increase social assistance for these families, as well as to also increase education and healthcare subsidies for these families.

Importantly, for much of the subsidies, such as Medifund, families are required to apply for them and have to go through cumbersome processes to do so. For example, they are required to submit the income statements of all their family members and have to do so every few months. But this is not only demeaning but for many of these workers who already have to take on several jobs, on top of taking care of their family members, means that much of their time is spent on hours and hours of paperwork, just to get a few hundred dollars, and this is if they actually qualify.

As such, not only does financial assistance to these families need to increase, the procedures to do so also need to be streamlined and automated.

The benefits to helping these families are many-fold.

First, investment in these families will allow the members to receive education and healthcare, which will allow them to move up the social ladder.

Second, as the livelihoods of these families improve, their future generations will also be uplifted.

Third, where the household consumption of these families increase, this will also increase the domestic spending in the country and result in higher economic growth.

As such, there are long term and macro benefits to looking out for and taking care of the poorer members of our society. Research has shown this.

But for such changes to be able to happen, it requires a government to have the political will not to place judgements on members of our society and to be able to empathise with their situation.

It also requires a government to be far-sighted and understand the social philosophy of these policies.

The question that stands in our way today is whether the PAP has the right values and beliefs to do so. The answer to this would lie in the PAP’s policies.

Where the PAP refuses to implement a minimum wage and increase the wages of Singaporeans, while only willing to pay $1,000 to cleaners, even as many Singaporeans have calculated $2,000 to be the minimum that they would need to sustain themselves, then it begs the question why the PAP would still not implement a minimum wage or define a poverty line.

In addition, the PAP spends the lowest on healthcare, education and social protection for Singaporeans among the developed countries, and also gives the lowest interest rates on our CPF pension funds in the world, while taking our CPF to earn high profits for themselves.

Meanwhile, the PAP ministers also earn the highest salaries in the world.

It is clear that the PAP is not taking care of Singaporeans.

The other political parties have said that they would implement minimum wage, increase healthcare, education and social protection expenditure, and to also introduce a pension scheme, on top of the CPF, to allow Singaporeans to be able to retire.

As such, political will for change awaits in a new government and in the other political parties which have articulated policies to protect Singaporeans.

If so, this coming election, Singaporeans have to think for ourselves what is at stake and to decide how we want to vote so that policies will be implemented to protect Singaporeans.

For a future where our countrymen are protected and which will uplift the lives of all in Singapore, a firm direction is needed towards change, so that Singapore can embark on a new journey, to bring Singapore into a better tomorrow.