In today’s article, the focus is on TAXES.

(1) How Are Taxes Built For The Rich In Singapore? 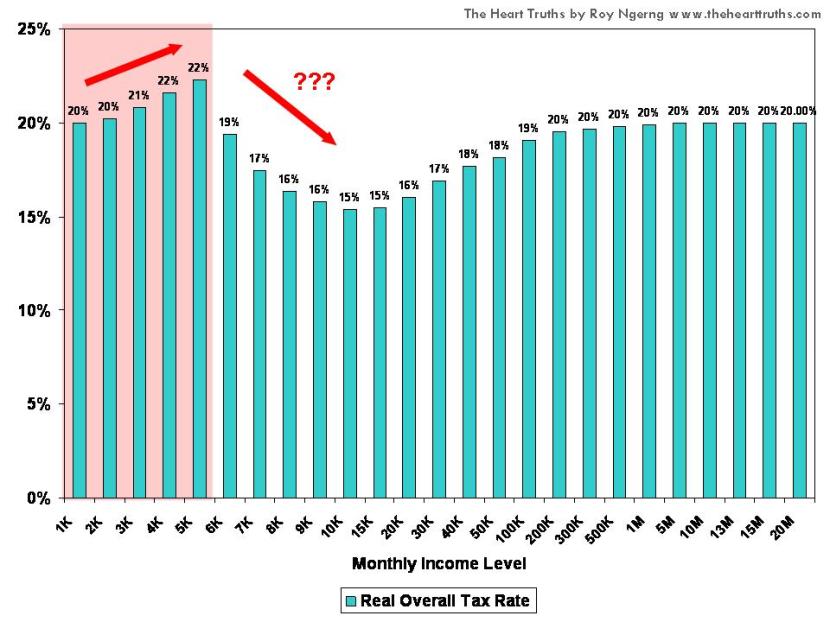 You can see that for low- to middle-income earners earning below $5,000, their real overall tax rate is actually higher than the high-income earners.

What this also means is that Singaporeans who earn below $5,000, or the lower-income earners, seem to be shouldering the financial burden in Singapore, and the rich would have it much easier in Singapore.

(2) Singapore’s Tax System: Robbing The Poor To Feed The Rich 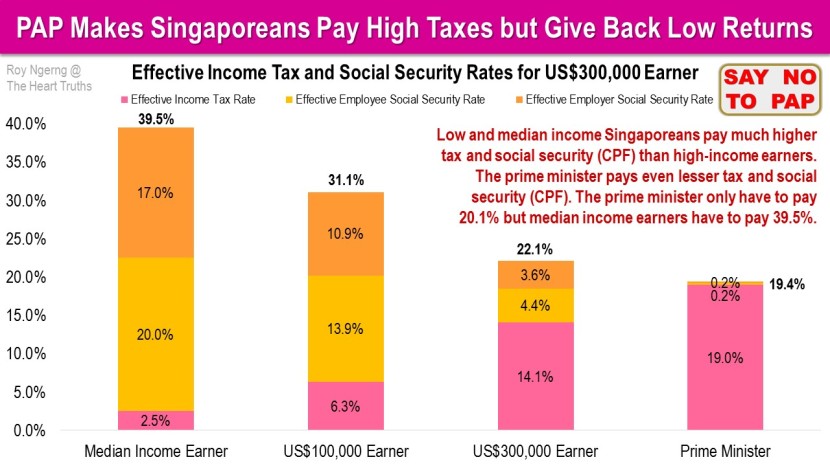 Also, the CPF has a tax component to it and the PAP is clearly making money out from it. Take a look at the illustration below.

For the median income earner, he/she has to pay a tax of 2.5% and 37% into CPF. And as we have discussed earlier, of the CPF, nearly 15% of our CPF actually becomes profit that the government is letting itself earn from us.

Also, there is the implicit tax. In the example above, if the CPF were to earn 6%, the person would have ended with $450,000. However, at the current interest rate of 3%, in order to still end up with the same $450,000, the person would have to contribute another 20% of his/her salary into the CPF – thus this additional 20% is actually the “implicit” tax that Singaporeans are paying to the PAP, or rather it is money that we are losing which we should otherwise have.

Finally, for the expenditure for healthcare, education and retirement that we would have to pay from our own pockets (which citizens in the Nordic countries and Germany only need to pay into tax and social security for), this would make up another 8% that we have to pay from our salaries.

Thus in total, the true “tax” that Singaporeans are actually paying (to get the same things as what the Nordic and German citizens pay into tax and social security) is a total of 67.5%.

Clearly, “tax” is not low. In fact, Singaporeans have to sacrifice the most – 67.5% – from our already low wages, which is why Singaporeans also have the lowest purchasing power among the developed countries.