I believe in Chee Soon Juan.

Today is Cooling Off Day. Dr Chee has stood up for Singaporeans. Let us back him up too.

If you would like, upload a photo of yourself on Facebook in support of Dr Chee and tag me, or you can send it to me via Facebook or at my email at royngerng@gmail.com.

I am thinking if there are enough photos, to compile them and upload as a Facebook album and on my blog tonight.

If you have a message to Dr Chee or Singaporeans, send it to me as well and I will post them with your photos. 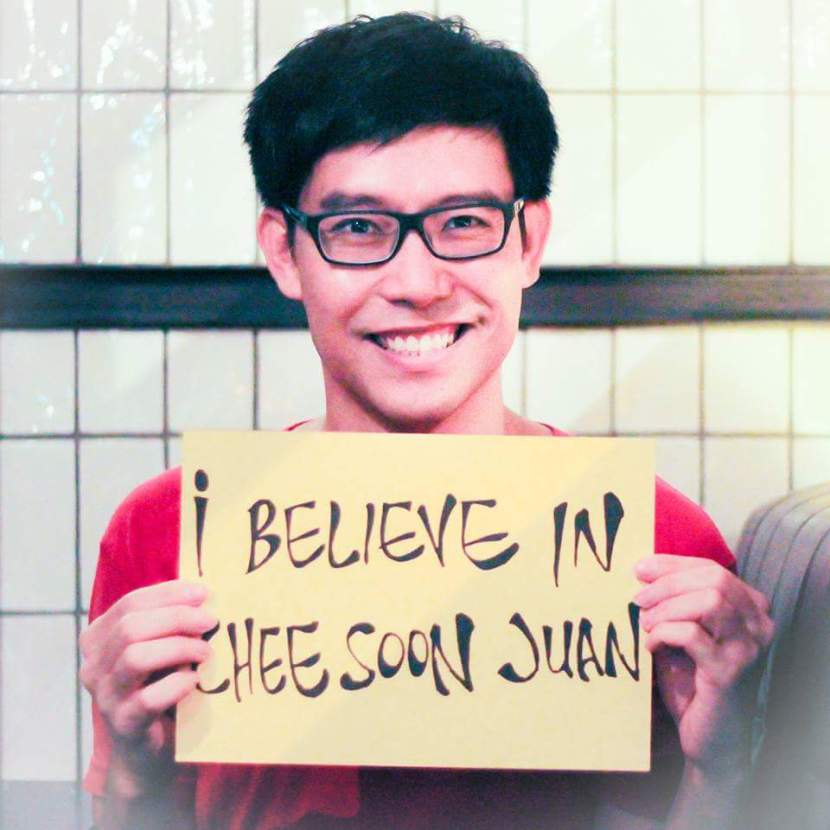 When I first read about Singaporeans who were sued, charged or detained on fabricated charges by the PAP, I did not think to much about it.

It was only when I was persecuted and charged later that I understood what it meant.

When you are the one to face such attacks, you live each day listening to the lies they say about you.

All of a sudden, I was “deranged” and a “troublemaker”. I was labelled terms which are not who I am.

When I wrote the articles on my blog, it was because I wanted a better Singapore, and a more equal society where our people would be taken care of.

So I was shocked when month after month, the government and state media turned against me and falsified my character.

It was not easy. How to you live with the untruths that people say about you?

Some of you would understand when rumours or gossips were spread about you. Already, it was hard for you to deal with.

Imagine that multiplied several times on a national level.

At times, I became depressed.

But you keep telling yourself to remember who you are and what you really set up to do. You keep picking yourself up and focusing on the goodness of why you do what you do.

And this is why I admire Dr Chee. I spent 2 years and it has already been a tedious journey.

None of us can understand the pain and hardship that he has to go through except maybe great men and women like Nelson Mandela and Aung San Suu Kyi.

For a government where profits and high salaries matter to themselves, to increase wages for the people and increase expenditure on health and education, and retirement for Singaporeans, mean lesser for themselves. Why would they do that?

This is why they wanted to persecute me.

Someone told me – you exposed them and threatened their wealth. Of course they would come after you.

But I told her, they took our money and our CPF to use without telling Singaporeans. It is they who are wrong. Shouldn’t I write about it?

In Singapore, it is a constant struggle to want to be true to yourself and to be honest, or to suppress your feelings out of fear.

I chose to be true.

So has Dr Chee.

He gave up the career he could have in America to fight for a Singapore he believes in – one which Singaporeans can live in justice and equality.

It has not been an easy road for Dr Chee. But he persevered.

But he believes. In a new vision. In Singaporeans.

We might not have the gumption or strength that Dr Chee has. But the least we can do is to admire the grit and courage that he has.

It is because of Dr Chee that right now, we still can hope for a different future.

It is because of Dr Chee that today we can hope that this by-election will bring us a new hope and a new future.

Dr Chee believes that one day things will get better for Singapore and Singaporeans.

And for this, he has my confidence.

I believe in Dr Chee.

I believe that he will fight for Singaporeans, as he has.

In him, I have hope.

In him, I dare to dream again.

I believe in Chee Soon Juan.