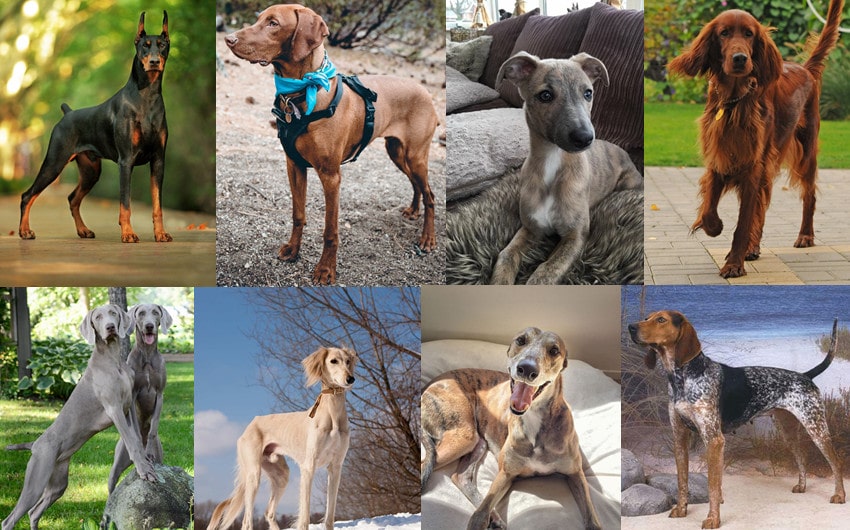 If you want to know the 8 most well-known tall and skinny dog breeds, as well as more about them and similar traits between all the dogs in this list, you will want to continue reading below. 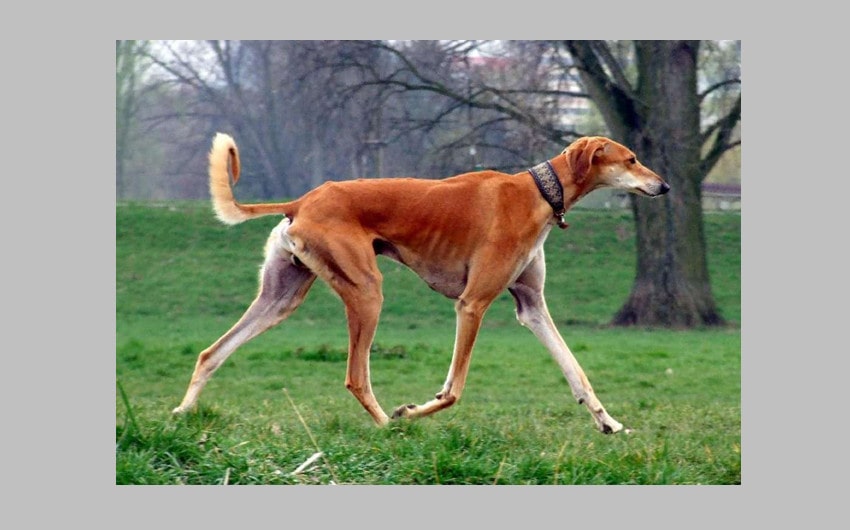 These dog breeds are very skinny. They are often not super well-known breeds like the golden retriever or Chihuahua, and are often misunderstood. One of the biggest misconceptions about these breeds is that at first glance, they can be considered underweight at a glance.

However, these dogs are very skinny as a standard, to the point you can see their ribs, which is considered unhealthy for most other dog breeds. However, it is standard with these dog shapes and doesn’t mean they are unhealthy. They also have a body shape where they have a deep barrel chest, but a small stomach area. These dog breeds are also usually pretty tall and gangly.

Besides their physical appearance, they have a few other similarities as well. They usually don’t do very well in cold conditions, since they have little to no body fat. Their minimal body fat also messes with their endurance, so they can’t run for long periods of time.

However, these dogs can do well at agility practices and sports due to their thin size and ability to do bursts of speed. They usually need a lot of mental and physical stimulation as well. 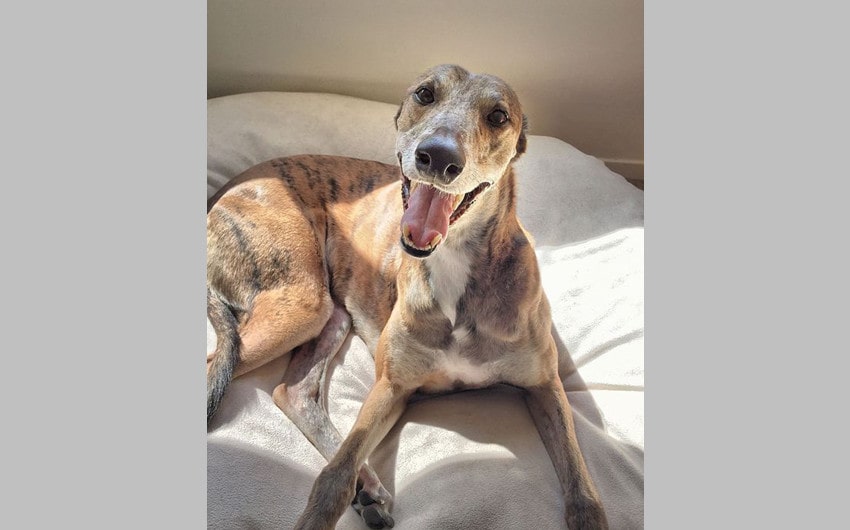 Greyhounds originate from Egypt and have a lot of history. Interestingly, they are the only dog breed ever mentioned in the Bible.

They are insanely fast, easily reaching up to 45 miles per hour. They were frequently used in dog racing due to their speed in recent history but were originally used to hunt and track prey like rabbits, deer, and foxes.

When it comes to tall and skinny, greyhounds easily show that body shape. At ideal weights, they only have 13 percent body fat and stand just over two feet tall. Their average weight is somewhere between 60 and 70 pounds.

All tall and skinny dog breeds struggle with cold, but greyhounds struggle even more as they don’t have undercoats to provide them with any additional insulation.

Due to their history of racing, many people assume that these dogs are high-energy and not suitable for most families, but that isn’t the case. Though they can run fast, they don’t like doing a lot of intense exercises all the time.

While daily walks are fine, they don’t often need more. In fact, their favorite pastime is sleeping over anything else. 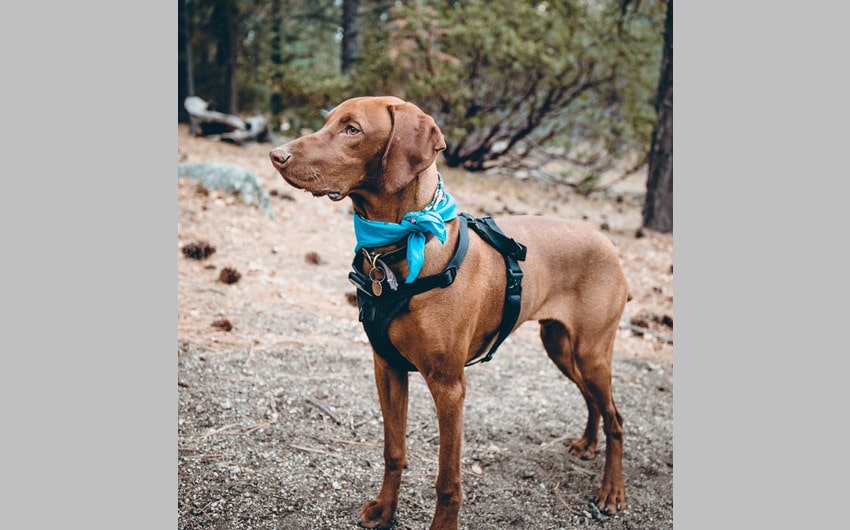 Vizslas originate from Hungary, and their name means “pointer”. Like greyhounds, they were originally used for hunting. They focused on sport hunting and birding. Unlike other dogs on this list, these dogs were built for endurance. While they may not be able to run full speed for a long time, they are made to stay out hunting all day without a problem.

Vizslas need a lot of exercises to stay calm. However, that isn’t all. They also need a lot of mental stimulation like puzzles and games, or they can become bored and destructive.

If you are a household that isn’t in the house much, these dogs are not the one for you. They are very prone to separation anxiety and can get stressed if left alone at all, especially for long periods.

These dogs are very well-known for their coloring. They are most often a golden rust color, but can also be other shades of rust. Despite needing a lot of exercise and attention, they make excellent family pets who can be around children with proper training. 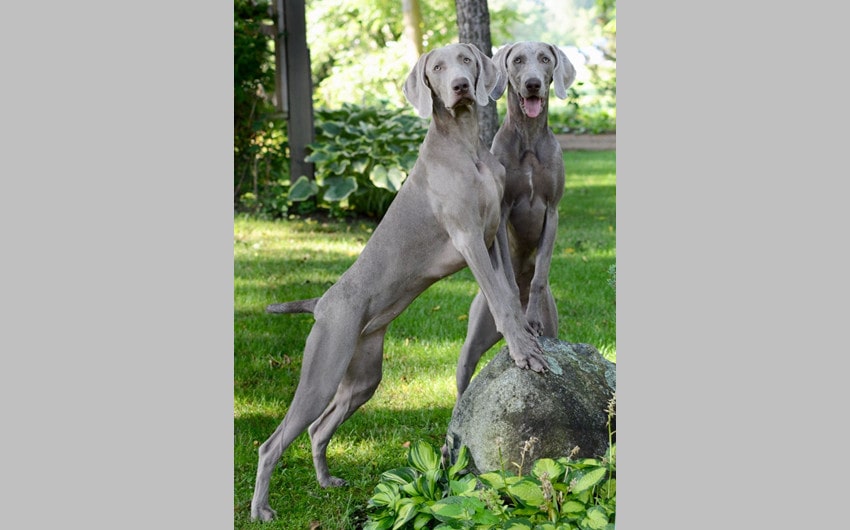 Weimaraners originate in Germany. They have a fairly long history, though not too long, only originating around the 1800s. As soon as they were bred, they became high in demand, with a secret club controlling the number of Weimaraners that could be registered and even who could get the puppies.

Eventually, the breed was no longer heavily monitored and they spread throughout the world. They were also hunting dogs, but also made fine companion dogs.

Their colors are unique and recognizable like the Vizla. However, instead of a rust color, their most common color is blue or silvery blue. They are known as “gray ghosts” due to their ability to be incredibly stealthy while hunting and their color.

These dogs are amazing hunting companions. They are smart and obedient to a fault. But while they enjoy helping and being an asset to their owner, they do also enjoy relaxing and cuddling up with their owners at the end of the day.

That clinginess comes with a price though. They can get separation anxiety and have to be trained out of it early on. They often also do better being locked up in a kennel when their owners are gone for a while, to prevent any destructive behaviors due to their anxiety. 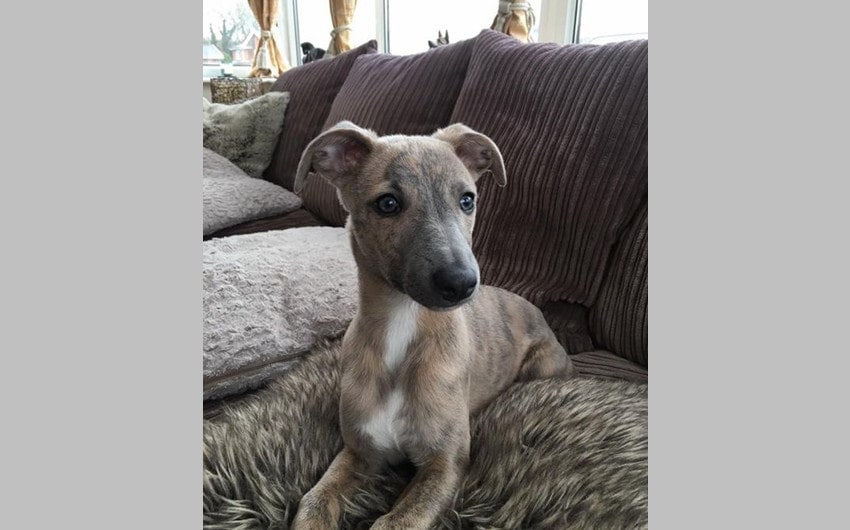 Whippets are often considered to be a mini version of the greyhound, with maybe a few more curves. They aren’t necessarily mini but are smaller than greyhounds, and are usually considered a medium-sized dog breed. They can run fast, up to 36 miles per hour, and have a high prey drive just like their bigger cousins as well.

Though they are some of the smaller dogs on this list, they can still be considered tall and skinny dogs because they seem tall and gangly due to their thin size. It is as if someone shrunk the greyhound, keeping the strange proportions.

They also don’t have an undercoat, so they do better in a warmer area, or they may need a couple of jackets and booties. Whippets love sleeping and cuddling with their owners. They are considered the most popular sighthounds in the United States of America. They are poor guard dogs though, because they get along well with others and even strangers.

Whippets do well in apartments. They don’t bark much, their smaller size means they don’t take up much space, and they are fairly low maintenance. They are also pretty good at knowing when it is time to wind down and tend to stay calm indoors while being much more active outdoors. 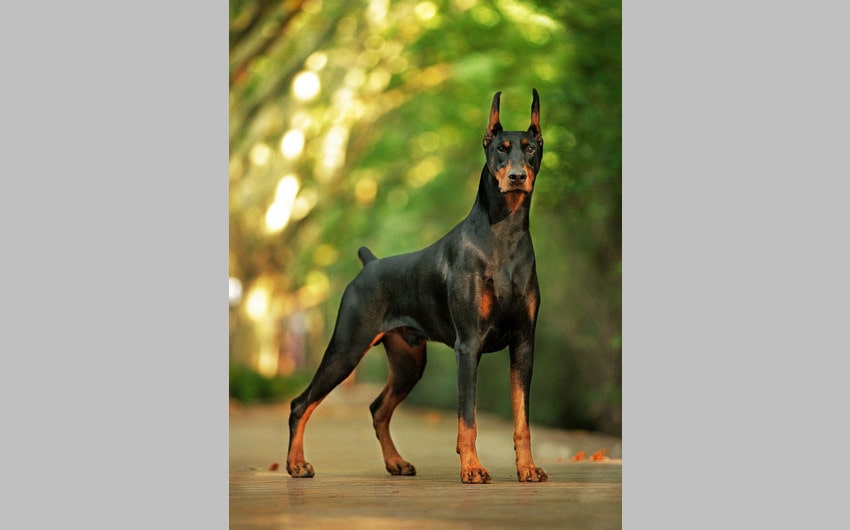 Doberman pinschers are one of those dogs that get a bad reputation. If not trained properly, they can lean towards being a bit more aggressive, though rarely ever towards their owners. They are highly protective and make excellent guard dogs, but they need to be trained on when to be alert and when to relax to avoid any issues.

They are also intelligent and fearless, so they will do anything to protect their family. They do need a lot of exercises and mental stimulation so they will listen to commands and be willing to sit down during training.

If trained right, they are gentle and loving, while still being willing to step in and protect their family when needed.

Like many other dog breeds on this list, they have a unique color that makes them pretty easily recognizable. They tend to be brown or black with light brown or red markings on their chest, ears, legs, and lower face.

These dogs are actually a mix of Weimaraners and a few other breeds. They are a relatively new breed, having been around since the late 19th century.

They do need quite a bit of exercise, so they are better for families and people that have an active lifestyle and don’t mind bringing a dog into their routine. 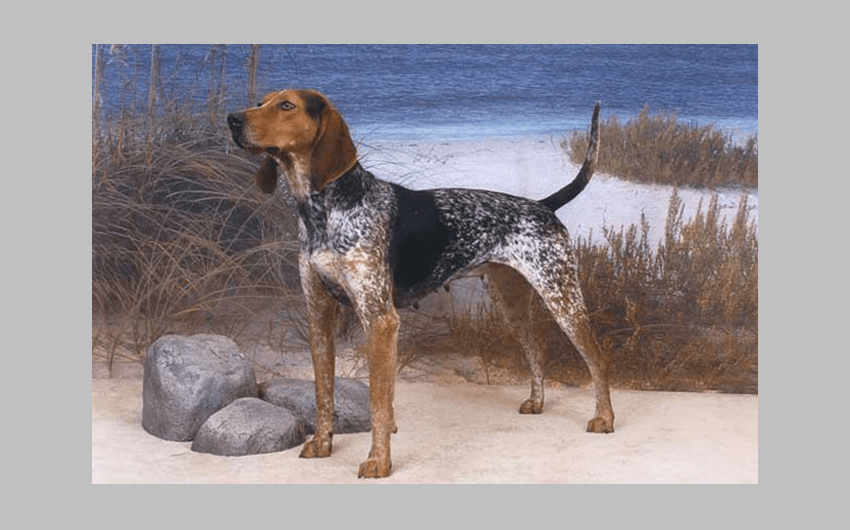 The American English Coonhound is closely related to foxhounds from Europe and has been around since about the 1600s. They do well with children, strangers, and even other dogs, so they make a good option for those that are a little more social and have a lot of guests and other pets around.

They don’t shed very much, and they also aren’t considered an aggressive dog breed by any means, so people can feel pretty safe having them around their family.

They do have a lot of energy. These are high-energy dogs and need a family that will help them burn off a lot of that energy with plenty of exercise and walks. They are also very talkative and loud, which means they may not be ideal for apartments or places with a lot of close neighbors.

They have a unique ability that should be noted by any potential owner and that is that they can climb trees. This skill was bred into them to help chase raccoons that like to run up tree trunks to avoid being captured.

They are also sometimes referred to as the redtick coonhound because redtick is their most common color. 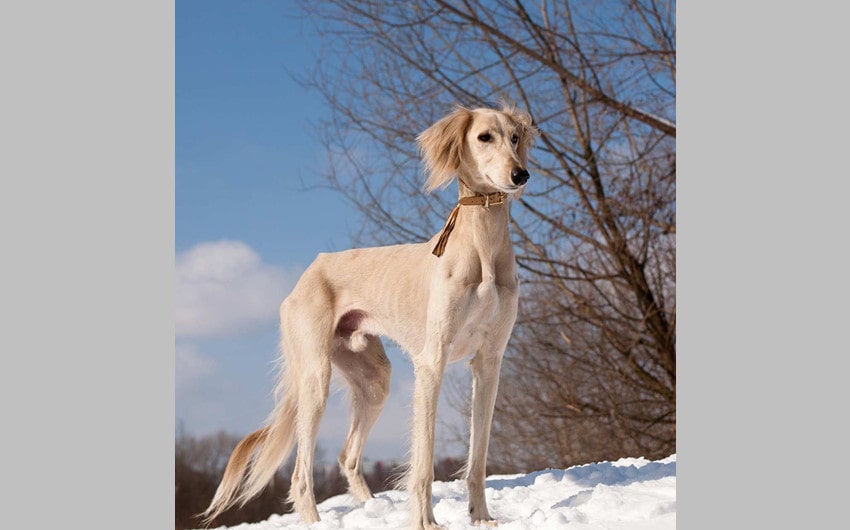 Salukis are a unique and beautiful dog breed. They tend to have longer coats than most other dogs on this list and their coats are smooth and silky. They originated from the Middle East, near Egypt, and have been around for a long time.

These dogs, like many others on this list, were hunting dogs. They were thought to be used by nomads to track animals like hares, foxes, and even gazelles through the desert.

Many Muslim communities at the time didn’t have dogs and considered them very unclean. However, they made exceptions specifically for the Saluki, giving it the title of “the noble one”.

Since these dogs were used by nomads, even though they were only bred with the same species for a long time, they grew to have a lot of variations. The isolated populations led to varieties in sizing and coloration.

These dogs are loving but reserved around strangers. They are also alright around children but don’t often play enough to make children excited and happy.

These dogs are fairly independent. If left to their own devices, they are quick to run and explore and don’t often come back when called, even if trained well. 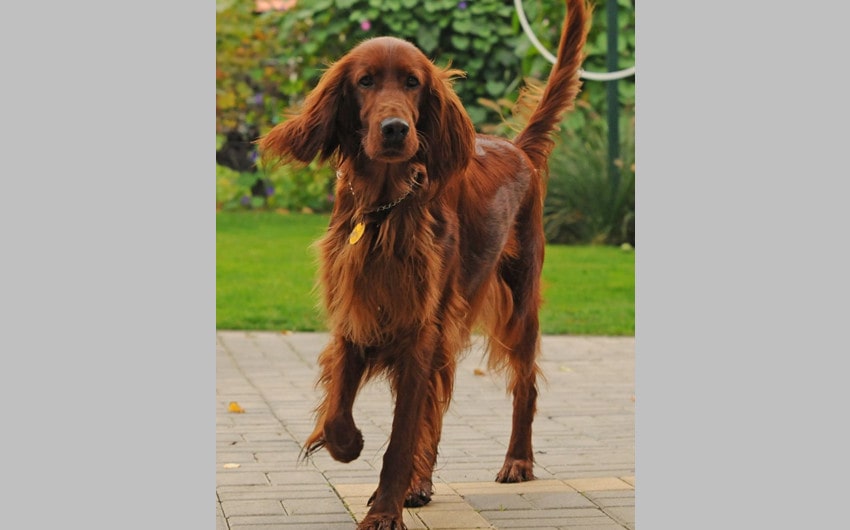 At a glance, you may not realize that Irish Setters fall into this category. They have long fur, making them look bigger and bulkier than they actually are. Under all that fur, they have the same shape as all the other dogs on this list.

As the name suggests, they are from Ireland and were bred around the 18th century. In the original language, Gaelic, their name translates to “red dog”. They are a mix of Spanish pointers and Scottish setters.

Usually, they have solid coats that are a deep and rich red. They are sometimes also called red setters because of their coloring. They are used for hunting and do well at scent-hunting, pointing, and retrieving. They are used a lot in wetlands and marshlands.

Their exercise needs are very high and having an active owner or a yard where they can go and run out to play whenever they want is essential.

Unlike other dogs on this list, the Irish setter needs a fair amount of grooming due to its long fur. They also shed quite a bit and can get fur almost everywhere.