The Straits Times had published a comparison of some statistics of Singapore and the Nordic countries for us to make a comparison as to ‘who’s better’, as the table is titled, as can be seen below. 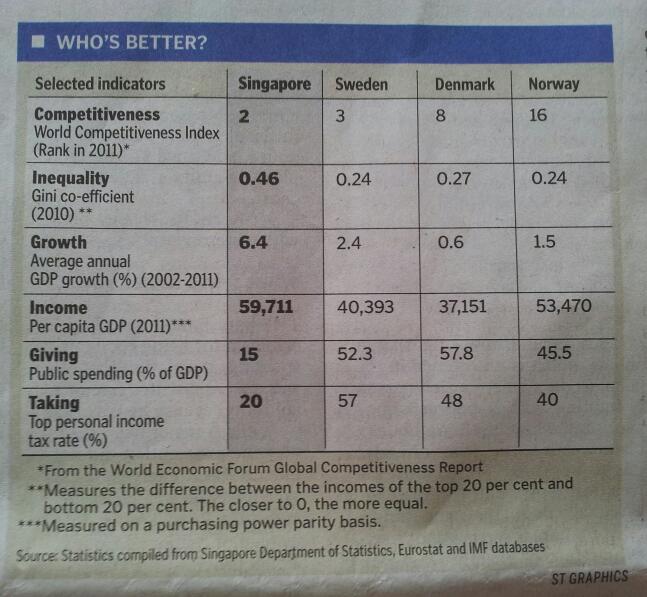 There is an implicit suggestion for us to compare the following:

Of course, what The Straits Times had not chosen were some other pertinent statistics to include into the comparison:

From the table in this illustration, you can see:

They should be thankful because:

Should we? Should we not question? I think we should – because of the money we loan our government to make a better living for us, not for them; because we deserve to be respected; because the government is now in a position to make it better for us, and they should learn to stop ignoring us.

The question we have to ask ourselves, finally, is, what is the government making all these money for, if not to help the people? Why does the government choose to spend so little on the people, in spite of having one of the largest proportionate cash stocks in the world?

Whilst “equality” is enshrined in our pledge, is the government actually still practicing it? Or it is simply lip service, literally?

What am I asking from the government? Simple. Respect us. Be honest to us. Be truthful to us. What are you doing with our money? How are we really being (mis)treated? Why do you not want to increase the lot of, at least those in the lower rungs of society? Why do you choose to present one side of the story but not the full story to us? Do we not deserve your respect, simply by virtue of people whom had put you into your position?

There is more than one way to achieve equality. There are hundred and one ways to do that and if our government is serious about achieving equality, they’ll find it. If the government is committed to doing something, they’ve shown us that they can do it. They’ve built the casino, haven’t they? They’ve allowed 36% of the resident population to be foreigners [3], haven’t they? We are not saying follow the Nordic model. We are not cows. We know better than to adapt wholesale what another country is doing, especially it being a country with characteristics much different from ours. No, we are not saying we want the Nordic model. What we are saying is – and listen carefully here – we want you to find a way to achieve equality and we know you can do it. We’ve paid you enough to find a way. Otherwise give us our money back. If you can find ways to make our companies rich, such as the ones that were previously government-linked but now “privatized”, then you can find ways to achieve equality. If you are not sure how to, then find different models, look for different ways. You are good at that. Look at different ways to achieve equality and implement what is doable. We have enough of your reasons and excuses. We do not want to hear anymore of, “We cannot adopt the Nordic model because we are different.” Of course we are different. Do you think we cannot see that for ourselves? We are saying, now that we know we are different, what can you do to achieve equality? Do it. We’ve been cows long enough. But even cows know how to find grass that’s greener. But if you give us grass, which is of poorer quality everywhere, and keep us there, where else to we find greener grass? Is it any wonder then that many Singaporeans have gone to where, where the grass could actually be greener on the other side?

Instead of asking Singaporeans if we are grateful, I am asking you back, my government, are you not grateful?

Endnote: Some readers might ask, are we comparing apple with apple? Note here that I have taken the selective information that The Straits Times has chosen to paint, and put in a fuller picture, so that we can understand the context to the information they shared.

I had originally posted this article on my Facebook page: https://www.facebook.com/notes/roy-yi-ling-sexiespider/comparisons-with-the-nordic-model-a-goal-towards-equality/10151834555125251