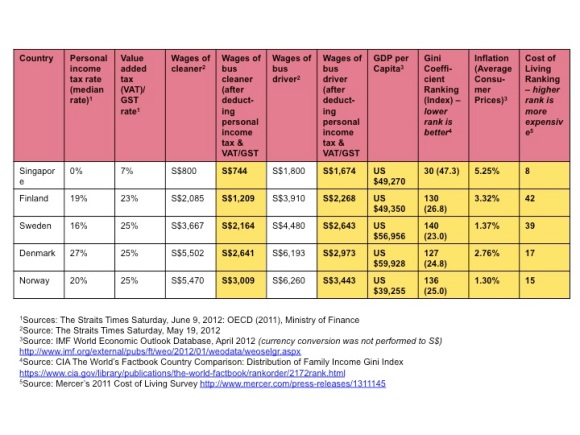 Prime Minister Lee had said last night at a speech at the Economic Society Singapore (ESS) Annual Dinner 2012, that “I do not believe Singaporeans would be willing to pay the taxes that Scandinavians pay, or that our economy could be competitive at such heavy tax rates.” I do not debate the economic soundness of having low tax rates to increase competitiveness, based on perceived lower costs.

However, separately, if we were to look at the wages of low wage earners, which Tommy Koh had shared previously, even after deducting for personal income tax and value added tax/GST, low wage workers in Singapore still earn substantially much lower as compared to countries with high taxes in this illustration. The assumption that higher taxes will result in lower disposable income is thus flawed and unjust. When compared to the cost of living ranking, Singapore ranks at 8th, which suggests an even higher burden on the lower wage workers to survive on their low wages.

As Mr Lee had pointed out, Singaporeans will not be willing to pay higher taxes, as would most people not, given a choice. But the Nordics have worked out that even with higher taxes, their standard of living does not decrease, and their disposable income is still manageable, as their governments have offset the higher taxes. However, in Singapore’s case, the government has championed low taxes but suppressed wages as well, with the reasoning that our taxes are low and thus the low wages. But clearly, the wages of low wage workers are in no way comparable, and thus the considerably lower standard of living. The question we have to ask ourselves is, is this humane?

Mr Lee had pointed out that Singapore’s Gross Domestic Product per capita is ranked 11th worldwide at $50,123. However, what he does not also mention is that our Gini Index is 47.3, ranked the 30th highest in the world, which means that income in Singapore is unevenly distributed and would be concentrated in the higher income groups. In comparison, the Nordic countries have one of the fairest income distributions in the world. What is also not said is that, in the same report, Global MetroMonitor 2011, Singapore is ranked at the bottom of 200 countries, with the lowest changes in income, at -8.9%, as compared to the previous year.

Again, if the government’s argument is that we should not follow the Nordic’s model of social welfare because it is unsustainable, the statistics clearly show that this is otherwise. Not only are the wages of our lower income workers (after tax deductions) lower, the GDP per capita is similarly lower, the inflation rate higher and the income inequality wider. If it is indeed the case that the social welfare model is not a desirable approach, then the Nordic countries should perform less admirably than they are doing. But their humane approach has obviously reaped benefits for their people, with more equity. The question then is, is our government’s principle of meritocracy one that actually benefits citizens as a whole, or does it perpetuate inequality because of the association between meritocracy and thus higher incomes, if you are seen to be able to produce for the economy? The other question is, has the government chosen to adopt the Nordic’s model when it pertains to economic growth and ignored the social aspects of their model, even if partial? The Nordic countries have shown that a high standard of living, a high standard of economic well-being and social development does not need to be one or the other. So, why does it seem that the Singapore government thinks so? Why the over-zealous attitude towards economic dynamism at the expense of social, mental and emotional well-being? Who is it trying to benefit?

What I am trying to do here is not to suggest that my government is doing a bad job. In fact, I sincerely appreciate how our government has managed to increase our standard of living to one that is very high, from since whence Singapore gained its independence. It is very easy for Singaporeans to travel abroad and to understand how the corruption and crime that reeks in other countries need not be replicated in Singapore.

What I am interested in, however, is how the government can treat Singaporeans with a different mindset. Mr Lee had said, “Our approach has been firstly, to promote enterprise and create wealth and jobs, rather than merely redistribute a smaller pie. Secondly, to foster social cohesion, by investing in every child and helping all Singaporeans equip themselves for good jobs and own their homes. Thirdly, to encourage self-reliance… saving for one’s future, rather than a sense of entitlement.” I do not think that many Singaporeans would dispute this as it has served us well.

Mr Lee had also said that, “every society has to strike a balance between individual rewards and social equity,” and thus the targeted interventions to benefit the lower income earners. Again, I do not dispute this.

But I would like our government to also not focus on only the quantitative hard economic aspects of things, but to also look at our qualitative social and psychological well-being. The growth taken in the early years of nation-building had required that Singaporeans were very focused towards economic growth and so education had been developed for that area. Priority is given to those who choose the sciences and mathematics because this is what will spearhead economic growth. But look at where this has taken us as a society, as people? The focus towards personal income generation, so as to increase national wealth, has inevitably resulted in people pursuing self-motivated goals. We have become more self-centred in how we treat others and with our “cannot lose” attitude, so as to push ahead of others. Is it any wonder that we complain that our young people show little respect and care for others, or that more traffic accidents happen on the roads because drivers deem that they should have the right of way over others, so that they can get ahead? Is it any wonder why drivers and cyclists do not get along because they feel that each has the right of way? Is it any wonder that we choose to discriminate, against people of other nationalities or against having elderly care centres in our estates?

This is further compounded by Singaporeans feeling that they are unable to speak out about policies or social issues that matter to them. The effective policies of the government’s early approaches to Singapore has created a fear towards responding to political and social issues, and even though the climate has changed, Singaporeans have not yet learned the skills to critique effectively on issues, because we have learned not to. We have been socially engineered to not have an opinion on things that matter. The government knows this. Because we lack passion for what we believe in, we lack the creativity to find solutions to manage them. Is it any wonder then that Singaporeans have developed complaining as a skill to deal with issues, instead of finding solutions? Complaining has evolved as our tool of expression, which does not put us at risk, but gives us an outlet to vent our unhappiness. But we have seen the effects of complaining. We can see on any forum or discussion pages that complaints have tended to veer towards our own managing our internal fears. But are we able to look at each issue that occurs broadly so as to understand how to manage them and how to manage our attitudes towards them?

Have we taken “self-reliance” a bit too far, Mr Lee?

At this moment, I am not asking for the government to provide quantitative social welfare benefits, at the expense of economic growth, Mr Lee. What I would hope is that we can look at Singaporeans, not only as economic nodes of production, but also as humans in our own right. The government has said it themselves, that people are our main and strongest resource in Singapore. However, how do we understand people as resources? It’s not only to equip us with “good jobs and (to) own (our homes)”, Mr Lee. It is also to allow us to grow emotionally and psychologically to be able to be manage ourselves well, as humans. When we give lower wage workers a low wage, what are we saying to them? You fulfill an economic role of little significance towards the economy and we do not value you as a human – and thus we pay you what you deserve – as a human who has little value. But is this the right belief? When Singaporeans complain, get angry and perpetuate this anger, is this what we want? People who do not find solutions towards managing their anger towards others, and most importantly, towards ourselves? Sure, the self-centred drive for self-preservation creates an anger that can motivate us towards being steadfastly focused on increasing economic growth, but at what expense?

Singaporeans are unhappy. The question is, why? On the surface, it might seem that we are unhappy because of rising costs, incomes that have not risen as fast as inflation, and higher housing costs. But sure, these are real issues – and the verdict is out as to whether the government is responding enough to these issues. What is not so obvious is that Singaporeans could be unhappy because we feel that our basic rights as humans are not being appreciated – I will tell you this as basic as I can – I want to live, Mr Lee. I want to be human. I want to be able to be happy, not because I have lots of money, but because, at the end of the day, I have done something that has made me feel a genuine sense of achievement, that I have done something that means something in my life. That I believe, that I have passion, conviction and strength.

And this, Mr Lee, requires that Singaporeans are no longer treated just as economic nodes of production and that you can trust us to be passionate about issues and to speak up about them, without needing to fear your power. It is to trust that even with this passion, we will not derail from economic growth, but because we believe so much in what we do, that we want the country to grow. It means that you can trust us and that we can work together to make Singapore truly our home. If you fear we cannot critique intelligently, teach us. Join us. Only then will we believe that the mandate we give to you is one that is of our best interests.

I had also sent this article to The Online Citizen for publication: http://theonlinecitizen.com/2012/06/thoughts-on-pm-lees-speech-to-the-economic-society/#.T9bJRbxeIQQ.facebook