It is very interesting to listen to what Minister of National Development (MND) Khaw Boon Wah had shared at the parliamentary sitting yesterday.

Khaw had said, “Our public housing policy should support the Government’s pro-family social framework. Singles are part of a family unit, and are encouraged to live with their families for mutual care and support.”

Then, he said, “The minimum age of 35 supports our promotion of marriage and parenthood. We will be revising our policies to allow singles to buy new HDB flats with certain restrictions. However, there are no plans to lower the minimum age, as marriage rates are highest between the ages of 25 and 34.”

MND’s Policy Strategy to Tie Marriage to Housing is Disjointed

In two written answers to parliament, you can immediately understand their strategy and the disjoint in their statements.

The contradiction lies in this – does MND want singles to “live their families” for 1) “mutual care and support” or 2) for the “promotion of marriage and parenthood”? Of course, you might say that there isn’t any contradiction, for wouldn’t “marriage and parenthood” create a family which will provide” mutual care and support”? It seems almost compulsive that MND’s primary concern is on ensuring that singles eventually get married, such that they then talk about how, 21% of the singles aged 35 and 40 who bought a flat got married anyway.

So, why is the government so fixated on singles getting married?

MND’s Policy on Getting Singaporeans to Get Married to Buy A House: To Increase Birth Rates 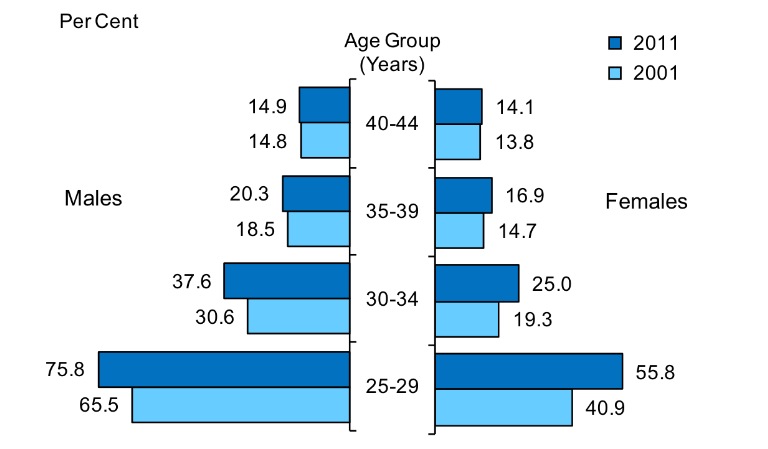 If you look at the chart below, it will give you a lot more clarity. For men, the peak at which marriage occurs is at the age group of 30-34, after which it falls. For women, the peak is at the 25-29 age group. If you were to peg your policy, you will peg it to as late an age group as you can, so that you can maximise the potential at which you can force people to get married. 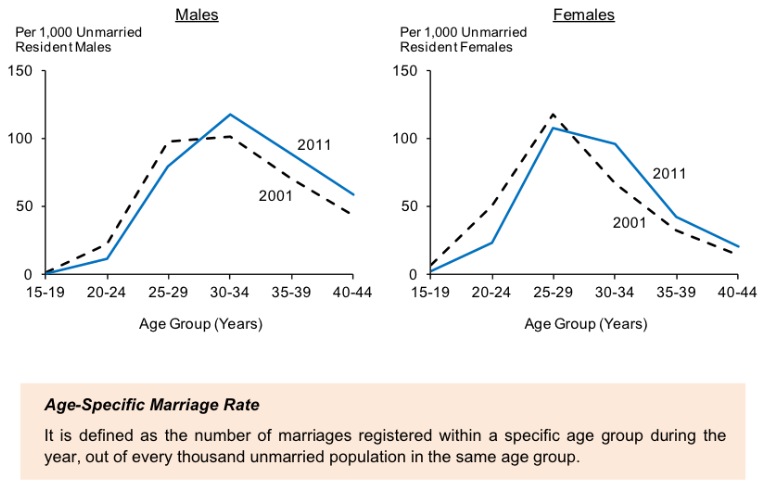 Of course, when this policy to allow singles to only buy flats at 35, the peak would have been at a different age group, but accordingly, the government would have planned in advance that the peak would change to an older age group, and thus had opted for the age of 35 as a good minimum age for singles to purchase their own homes.

Then, the question is – would the government prefer to move this minimum age to 40 if they could? I would say they would have liked to do so, seeing how the peak has moved. This would mean that peak at which people are more likely to get married could even be in the 35-39 age group in 10 years’ time.

Of course, there are other reasons that the government had chosen the age of 35 where they could allow singles to eventually buy their own homes. 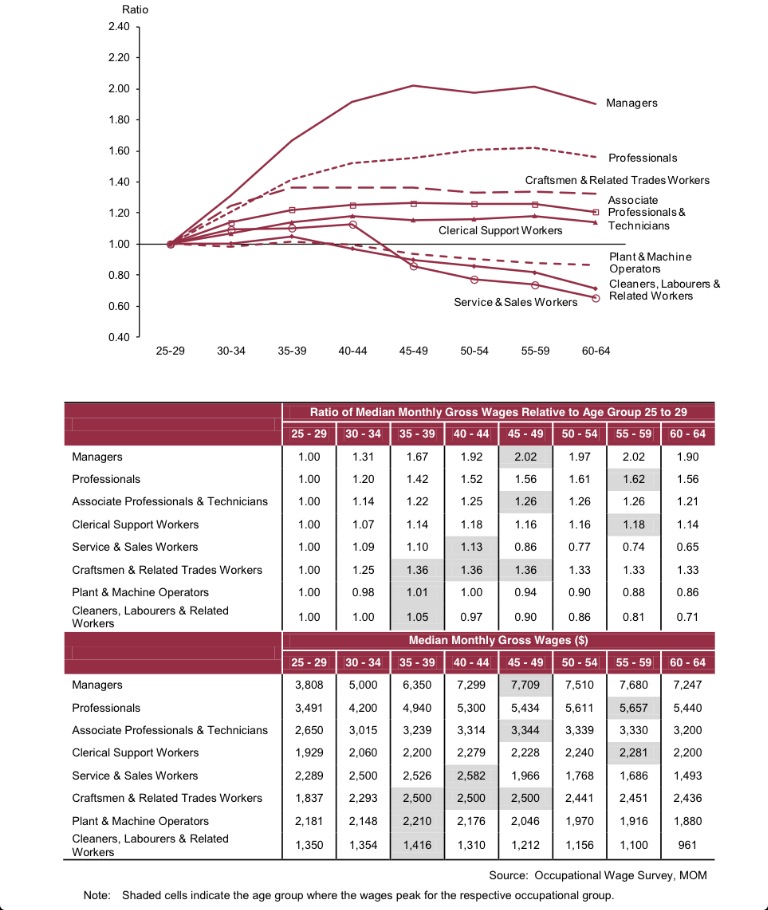 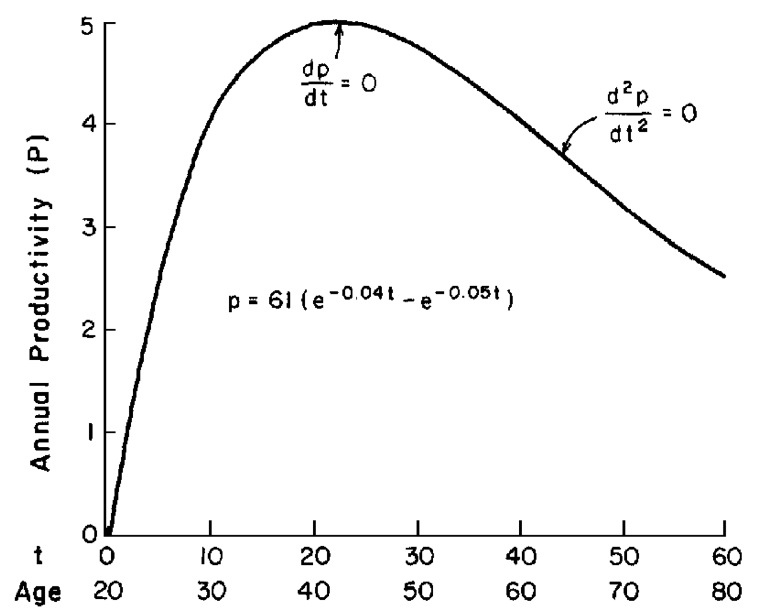 Chart 5: Relation between productivity and career age according to two-step cognitive model under typical parameters (from Simonton,1984a). (Source: Age and Outstanding Achievement: What Do We Know After a Century of Research?)

However, as I had mentioned, is it wise to tie the age of allowing singles to own their homes according to the age at which marriage peaks? In other words, should we encourage people who want to own their own homes to get married earlier just so that they are able to do so? The question we need to ask is – is this healthy?

Based on the chart below, you can see that the rate of divorce is higher among those in the 20-24 age groups, and indeed, in the 20-34 age group. The divorce rate only stabilises from age 35 onwards. What this suggests then is this – while we are hoping, or forcing Singaporeans below the age of 35 who want to own their own homes to get married, so that they would be able to do so, we are inadvertently also fuelling a problem – higher divorce rates before the age of 35.

Herein lies the contraction – at the expense of the “promotion of marriage and parenthood”, what kind of  “mutual care and support” are we providing when the very people who are encouraged to get married are also the very ones who most likely to get a divorce – and not be able to receive the “mutual care and support” which the “promotion of marriage”, and with that, the purchase of the house, should, by which the policy suggests, should confer?

To be clear, I am not suggesting that if someone wants to buy their own home, they should get married. But this is the very logic that Khaw and MND is suggesting:

I am not so sure about that. By so overtly tying the housing policy to the marriage policy, we’ve inadvertently created a population which has learnt to think about housing and how they can find means to afford housing. The negative effects of this can be seen precisely in the high divorce rates among the younger population.

According to the Singapore Business Review, “Among civil divorces, the main reasons for divorce in 2011 were “Unreasonable behaviour” (49 per cent) and “Having lived apart or separated for three years or more” (47 per cent). “Unreasonable behaviour” of spouse was cited as the main reason by 56 per cent of the female plaintiffs while “Having lived apart or separated for three years or more” was the main reason for 58 per cent of the male plaintiffs.” AsiaOne News also reported that, “Marital counsellors and divorce lawyers said there are a number of factors behind this rising trend. Firstly, there is less of a stigma attached to divorce today. Coupled with unrealistic expectations of marriage, and the inability or lack of desire to resolve problems, this can lead to more than one divorce … Another lawyer said there were those who did not try to make their marriages work after encountering problems in their marriages. They then start looking for someone else after living together for a few months.”

Compounded with the issue that we have a policy which ties people’s want for their own homes with the idea that they should get married, what are the psychological effects as to how people make their decisions as to whether they want to get married or not – how much does housing weigh on their minds? I have heard several stories of how couples have gotten together to buy a home, only to realise right after marriage that they do not find each other suitable, or that they had decided to divorce a few months after the marriage. And how often do we hear of how a person might propose to his or her partner by asking if they would like to buy a home together? This might be a joke, but is there some truth to it?

The fundamental issue I would like to bring up is this – The Singapore government wants to encourage Singaporeans to get married before 35 years old, so that they can give birth before the optimal fertility period, so that this can add to the workforce. Yes, we want workers, and that’s why the policy of preventing singles below 35 years old to buy their own homes, and thus encouraging people who want to buy their own homes to get married, has become an economic motivation for the government to protect. But at what expense? Whether or not the government has intended this policy to create the side-effects that it has now – where whether people want to buy their own homes do weigh heavily in their decision for marriage – the policy has in fact created this side-effects which are not healthy to the social fabric of Singapore. You want a Singaporean who is aware of what he/she wants, what he/she wants to find in a person and go into a relationship with a healthy frame of mind to be able to manage the issues that arise within the relationship in a positive, healthy and cultivating manner. 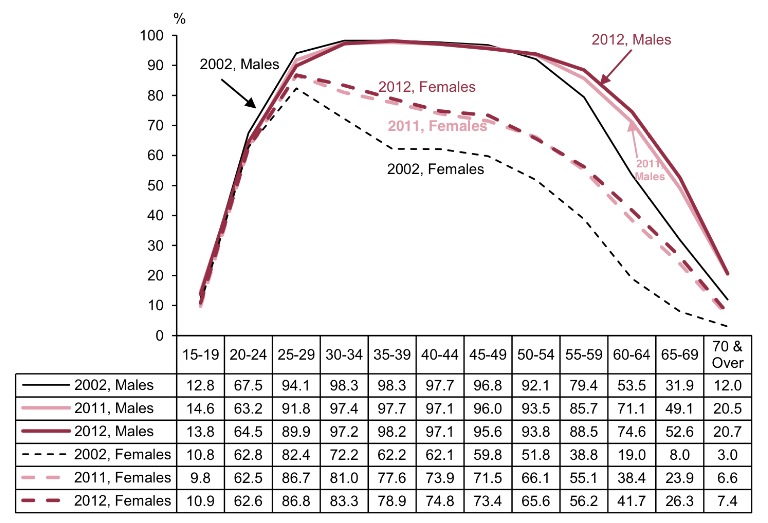 According to the Singapore Business Review, “Singaporeans work the longest hours at 46 hours per week” among top cities, as can be seen in Chart 8.

All these factors compounded, what this means is that for the Singaporean aged between 25 to 34, they are made to think about and commit themselves to some of the most critical decisions of their lives. Yet, they are not given enough time to think about these issues, due to the long working hours, and they are also made to decide on these issues, based on critical decisions such as owning their own homes.

For the government, is it still wise for the government to peg the idea that if a Singaporean wants to own a home, whether they are married or not would necessarily have an effect on their decision making? This not only discriminates against the single person but the person who decides to marry (or not) as well – this policy acts to further complicate their decision-making. This policy might serve its economic purpose, yes, but is it useful or healthy for the social fabric and development of Singapore? And I think the answer is pretty clear. Does the government want to insist on pursuing policies which will sustain the economic condition of Singapore, whilst neglecting the social, psychological and emotional condition of Singaporeans? And I think this is a question that not only the government, but Singaporeans, have to ask ourselves.

For the residents of Punggol East constituency (which are really the residents of Sengkang East and Rivervale – you can see the map below to know if you are in Punggol East), you have to also think about this. Do you want your children to grow up in a country which so fervently focuses itself on economic issues and policies shaped towards generating revenue for the economy, whilst at the same time, neglecting the social, psychological and emotional growth of Singaporeans, even as it adversely affects the social dynamics of Singaporeans and the psychological interpersonal relationships among Singaporeans? And I think the answer is pretty clear as well. 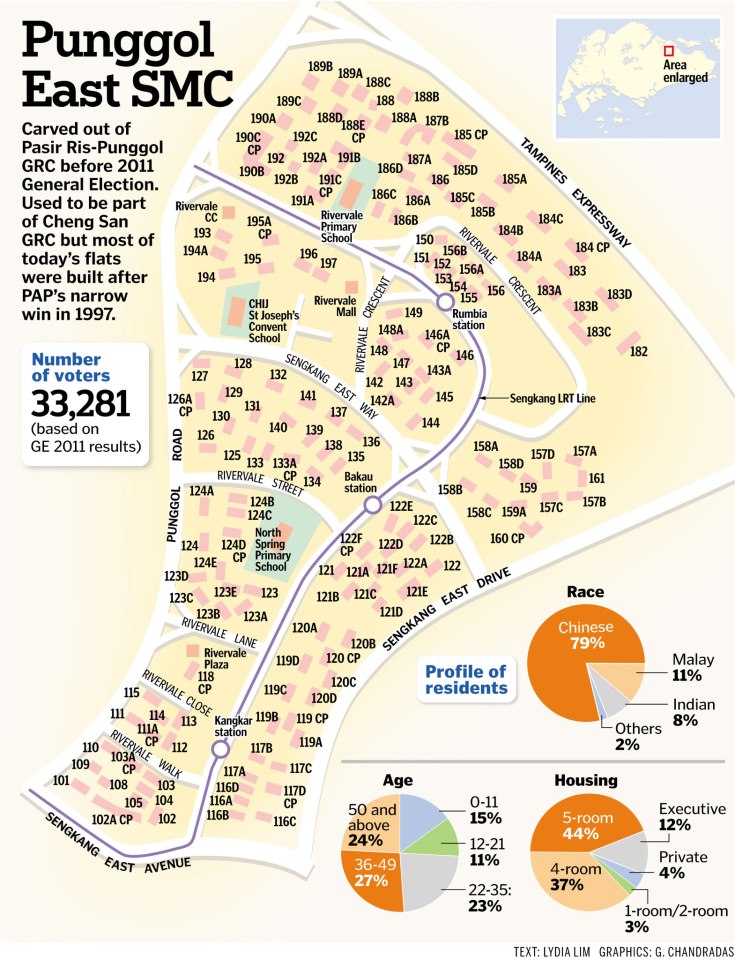 For this by-elections, as I have said before, your vote is a very strong symbolic decision as to whether Singaporeans will be heard. Your vote and your decision will represent the intermediate voice that Singaporeans can give to the PAP government about what we think, nearly two years since the last general elections. Have they done what they should have done?

If you do not think that they have done so, you have to vote decisively and firmly away from the PAP.