In Budget 2013, the government announced or enhanced 3 initiatives to boost the incomes for lower income earners.

In this article, we will look into the impact of these schemes for the low wages workers.

If you look at Table 1, you can see the WIS payouts for last year. You can also see in Chart 1 the comparison in the chart. Note that the WIS payouts listed here are annual amounts. 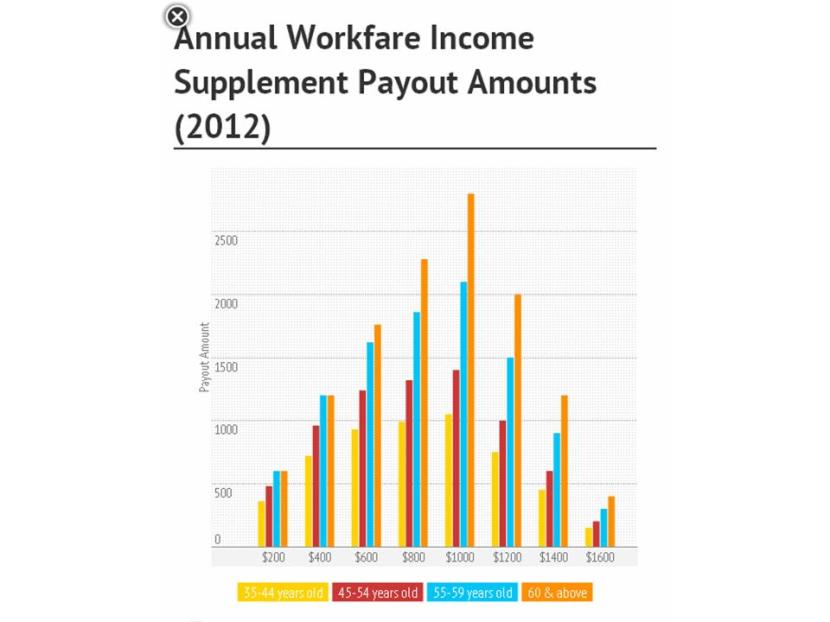 You will notice that the WIS gives higher payouts to older workers. Those 60 and above are given the highest payouts. So, does this mean that the WIS benefits older workers more? We will look further into this later.

Oddly, you can see that the WIS payouts increase as the worker earns a higher income, up until the $1,000 wage point, where the payouts thereafter decreases.

Logically, one would expect that the WIS payouts should be at the highest for the lowest income earner, at $200, and thereafter decrease as the worker earns a higher income, as in Chart 2. However, this is not the case.

There could be several reasons:

(Note: I had computed the CPF amounts according to the CPF Contribution Rates as stated here. For the computation of the WIS payouts, I had divided the annual payouts by 12, to obtain a monthly payout amount.) 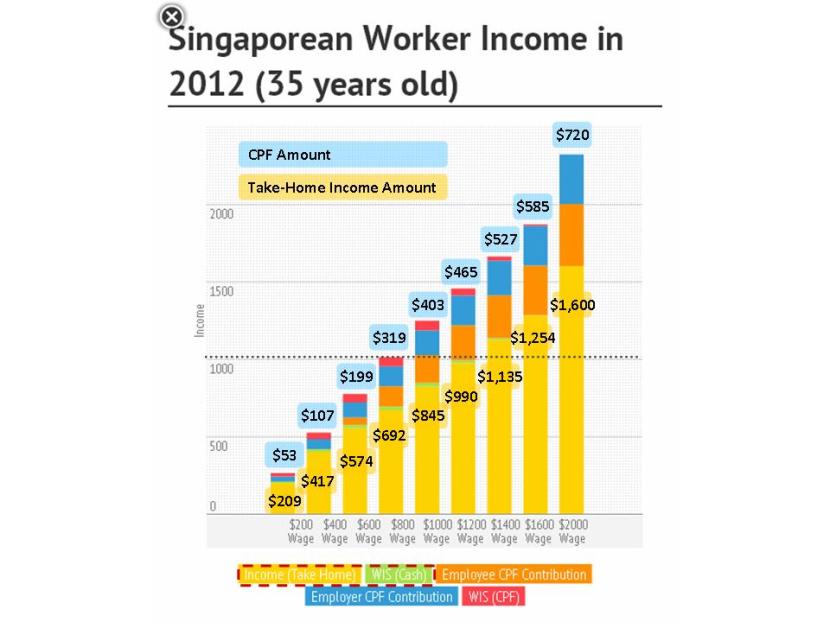 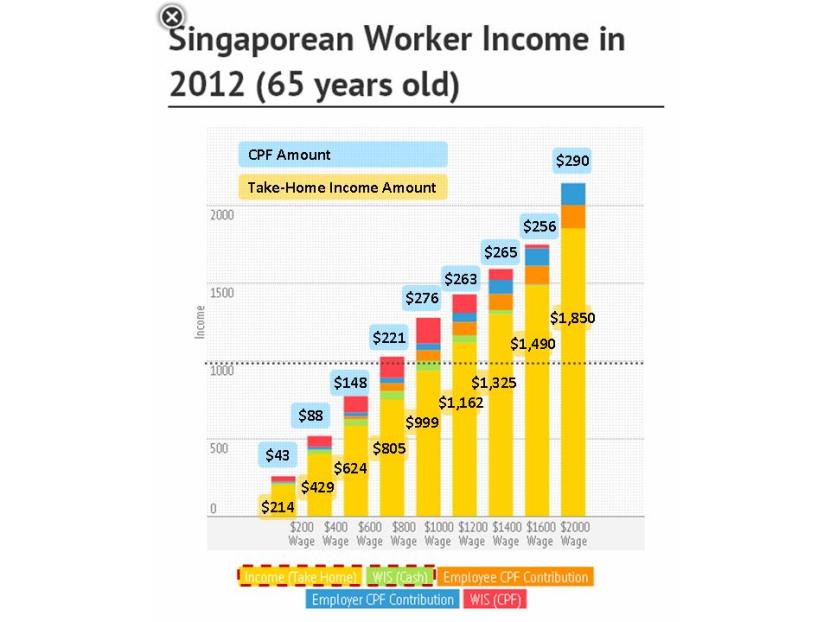 You can see that WIS benefits the older workers more because for a 65 year old, if his salary is below $1,000, his take home pay is equal or more than what his salary is, after CPF deductions, whereas the same applies for a 35 year old, only for a salary of up to $400.

On the surface, it seems that WIS is more beneficial for the older workers. But is this so?

If you look at the total income of workers aged 35 and 65 years of age in Chart 7, you can see that given that both the workers in the different age groups earn the same salary, their total income (including CPF and WIS), for the older worker, is actually lower, generally speaking.

In Chart 8, you can see that in terms of take-home income (after CPF deductions), the older worker actually takes home a higher income, which seems to be good.

But when you look at Chart 9, you will see that older workers have a much lower income in their CPF. 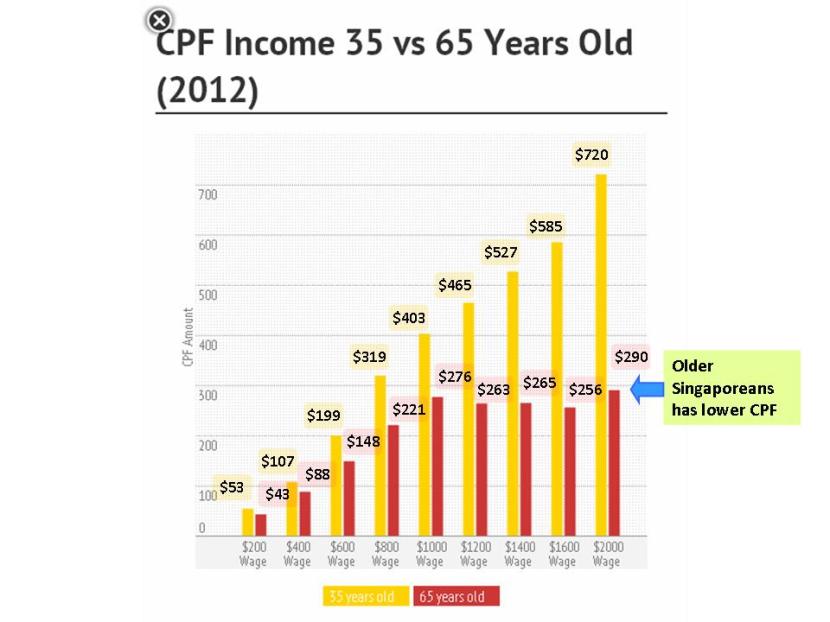 Finally, in Chart 10, you will then be able to understand why the WIS gives a higher payout for older workers, but the thinking is not because the older workers need to be given a higher total income for retirement, for the WIS is really meant to cover up for the shortfall in income from CPF, and even so, the older worker still doesn’t earn an equal salary, as compared to a younger worker, as Chart 7 has shown. 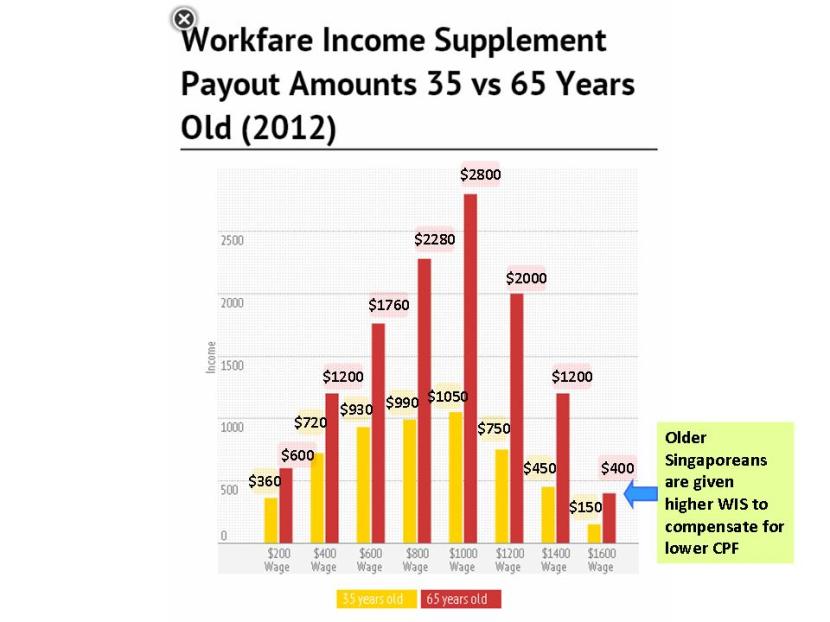 This is worrying though, because as much as the government continues to want to encourage our older workers to work, our older workers aren’t treated fairly and are not given an equal pay. This is especially worrisome because the older workers will be reaching retirement soon, where they would need more savings after they retire. Yet, not only are they not paid more as they grow older, but are actually paid less, and their incomes also remain stagnant throughout their work life, if they earn a low income. This means that our older workers are trapped in a chronic state of poverty, which renders them having to work even long after their retirement age, because they are simply not accorded enough to retire.

The government might have lowered the CPF contributions, so as to allow for the older workers to have a higher take home pay. Even then, the take home pay isn’t significantly much higher and doesn’t compensate for the loss in CPF.

And so, this was what the government has decided to do in Budget 2013. In Chart 11, you can see the increase in WIS payout in 2013. Let’s look at the effects.

How does the increase in WIS payout impact on the low income workers?

(Note: I had computed the CPF amounts according to the CPF Contribution Rates in 2014 as stated here.)

Chart 14 shows the comparison of the total incomes for a salary of $1,000 at different age groups, before and after the increase in WIS payout in 2013. Note that the total incomes also reflect the change in CPF contributions.

Would this be enough for the lower income workers? I would argue, though, that more top-ups could be given to the worker, as he grows older, because if the low income worker has been subjected to low income throughout his work life, then more needs to be given to compensate for the lack of growth of his income, to counter for the depression of his wages and the significant increase in inflation. Can more increases by made to the WIS payouts for older workers?

Thus in 2013, the government says that, “with more cash from WIS and other measures to improve employability in place, there is scope to increase the CPF contribution rates of low-wage workers so that they save up more in their CPF.”

I am not sure how helpful this is because upon retirement, it is still difficult for the low income worker to withdraw his CPF monies because he would need to set aside a minimum amount in his CPF before he is able to withdraw. However, if the worker has been receiving a chronic state of low income, will he have sufficient to withdraw from his CPF? It is still ‘safer’ for the low income worker to have cash in hand, because of the restrictions put in place for the withdrawal of CPF. Otherwise, the government would need to reform the CPF system or increase the interest earned for older workers in the CPF.

To look at the effects of the WCS, we can track the progress of a worker over 3 years. 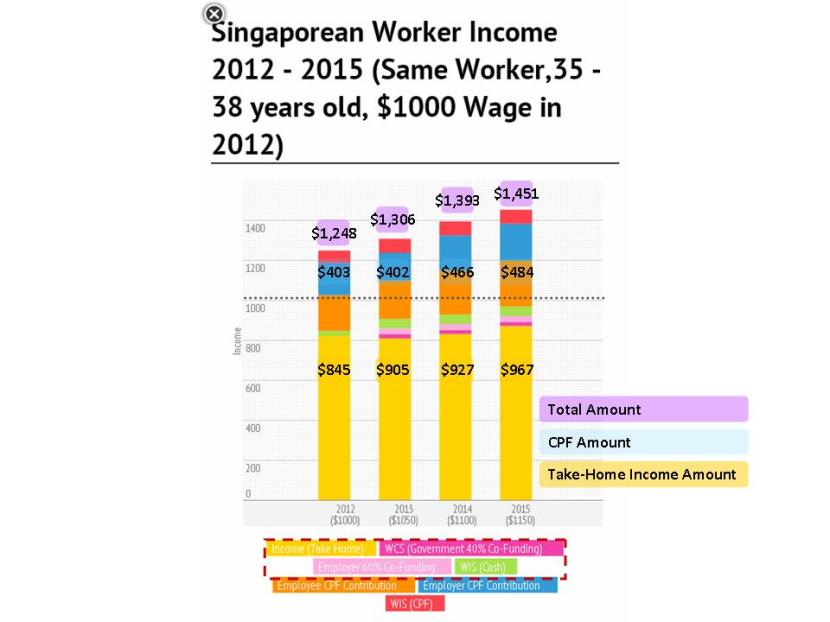 At this point, it might seem that together, the WIS and WCS might actually benefit the older low income worker, to a certain extend.

However, the question is, how will employers use the WCS?

You can see a clearer comparison in Chart 19. 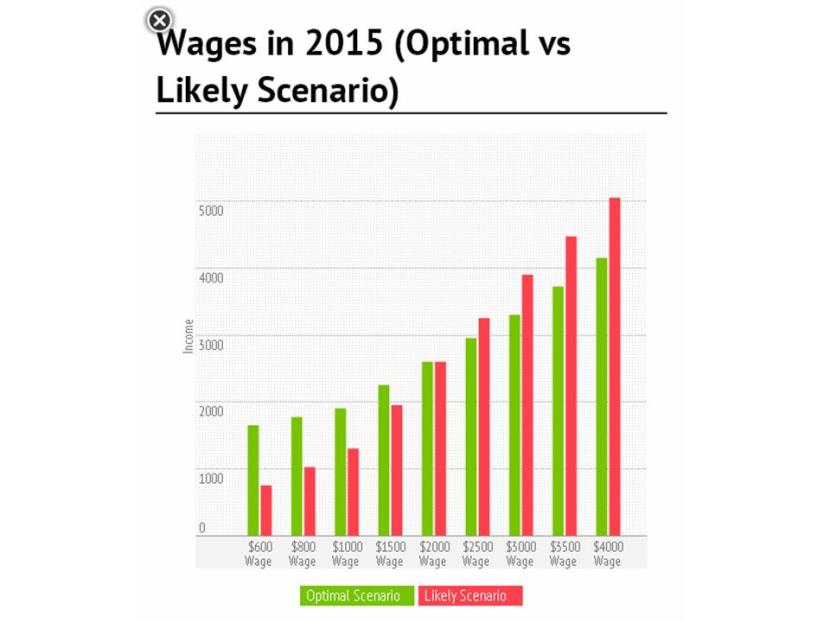 Essentially, what the WCS hopes to achieve is what Prof Lim Chong Yah had prescribed as ‘shock therapy’, where he had recommended to implement a “wage freeze for top earners while raising incomes for the poorest by … 15 per cent in each of the first two years and 20 per cent in the last year.”

The philosophy behind the WCS aims to replicate this, without an affirmative policy which employers would be held accountable by. Employers have to increase an employee’s salary by at least $50 to qualify for the WCS. Also, the WCS is applicable only for workers who earns a gross monthly wage of up to $4,000. Essentially, this is a cap which is aimed at motivating employers to increase wages for those earning below the range of the top earners.

However, the WCS might falter because first, employers are still more likely to reward those with ‘higher’ skills, rather than those who work in jobs where the perception is that the skill sets cannot be much improved. Also, employers of low income workers will need to increase by more than the minimum $50 requirement for workers to see a significant leapfrog in their incomes. Third, as there is no barrier placed for the growth of the incomes of the top earners, income inequality will still continue to exacerbate, because the top earners will continue to receive significantly more wage increments than those who are targeted to benefit from the WCS.

Essentially, what the WIS and WCS combined, hopes to do is to increase incomes significantly that by 2016, a minimum wage can be imposed.

By this time, not including the part-time workers, there might be only about 30,000 to 40,000 workers who earn less than $1,000. By 2016, with a much reduced pool of low income workers, it might be a better time for the government to impose a minimum wage of $1,000, so that even if businesses would need to make adjustments, there would be fewer companies and fewer workers who be affected, as most of them would have already seen their pay increase over the minimum wage by then.

In summary, the WIS and WCS are unique schemes to boost the wages of the low income workers. However, these schemes are not sustainable in the long run, as wage adjustments should eventually be a function of equitable transfer of costs and profits by the businesses to workers, with minimal over-regulation. In the medium term, the government should aim to reduce the over-reliance of additional schemes to boost wages, which thus explain why the WCS has been set for a 3-year period.

Also, to be clear, wages for the low income workers have been depressed for more than a decade, so even if a minimum wage of $1,000 is implemented, there would need to be at least another two or three subsequent increases to the minimum wage to ensure that the minimum wage is pegged against the eventual corrected wage. Thus in the medium term, the WIS will continue to match the incomes of low income workers to the ‘optimal’ wage at each point, and the WCS might be extended for another few years to cater for further wage corrections after 2015.

On the whole, if we look at the WIS and WCS from a longer term perspective, they could be intended to phase in structured and systematic increases in the wages of low incomes workers, without unduly causing stress among businesses, by giving businesses the free rein to manage their costs.

For some businesses, they might not take advantage of the WCS in the first year of the scheme, as they might take a wait-and-see approach to see if the productivity initiatives that they would adopt in 2013 would take effect. They might then give larger increases in 2014 and 2015, to compensate for the lower wage increment in 2013. However, I think it would be more likely that businesses will increase their workers’ wages by at least $50 in the first year, to take advantage of the cost savings, and then give possibly higher increments in 2014 and 2015.

However, if businesses are reluctant to give any significant increments between 2013 and 2015, and choose not to take advantage of the WCS, and if they are a business which employs low income workers, I believe that they will expect to be in for a huge shock in 2016 when the government takes affirmative action to uplift the wages of the low income workers.

But – if PAP does not implement a minimum wage by 2016, then they will be in for a rude awakening when PAP loses the right to form the government for the first time in Singapore’s history.