Today also reported that, “He noted that rising operating costs, such as increasing diesel prices, are putting pressure on the PTOs, particularly on the bus industry. Between 2006 to 2011, diesel prices have risen by 55 per cent, while national wages have risen by 25 per cent … In contrast, fares have cumulatively risen only 0.3 per cent over the same period.”

Finally, Today reported that, “Against the backdrop of worsening bus industry financials, I expect that it will be a challenge for the PTOs to do more to expand and enhance bus services without additional assistance,” said Mr Lui.”

Let’s take a look at the statistics to verify Mr Lui’s statements.

If the trend continues into 2020, you can see that SMRT’s revenue would be expected to continue to keep increasing at a faster rate than operating costs. 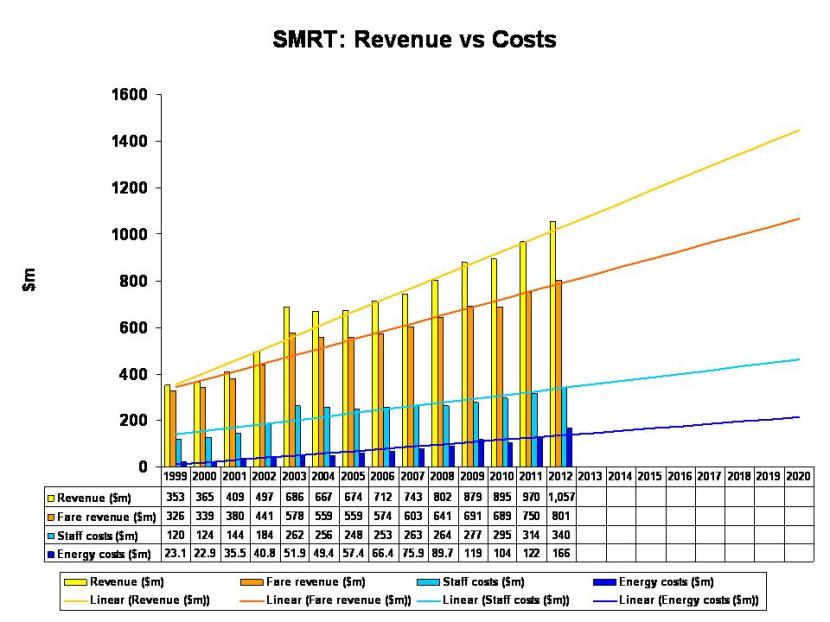 In Chart 3, you can see, however, that SMRT’s profits have decreased over the past 2 years. However, even then, SMRT has been registering healthy profits of more than a $100 million every year since 2005. 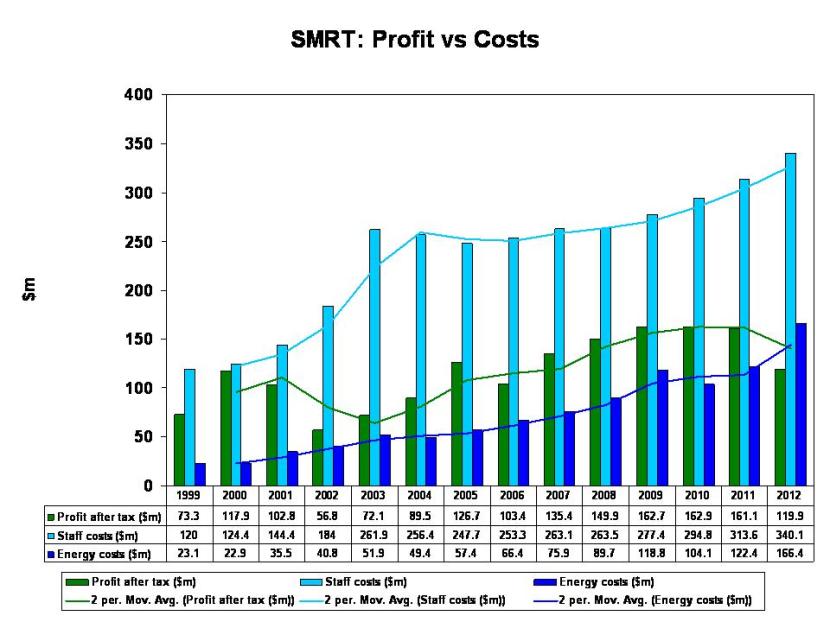 In Chart 5, you can see the percentage changes. Again, the trends seem to correspond to one another. However, in the last 3 years, there were much larger fluctuations, though they would largely even out – the overall increase in staff strength from 2008 to 2012 is 4.9% whereas the increase in wages and salaries over the same period is 4.8%.

Next, I wanted to see how SMRT’s revenue changes with its ridership. In Chart 6, you can see that the trend corresponds to each other.

In 2011, the government had launched a $1.1 billion Bus Service Enhancement Programme, which “calls for 800 new buses – 550 from the Government and 250 from the operators – to be added to the existing bus fleet” by 2014.” Mr Lui had said that he had expected, “that it will be a challenge for the PTOs to do more to expand and enhance bus services without additional assistance.”

Based on the government’s plan, another 800 buses will be added by 2014. In 2011, SBS Transit has a bus fleet of 3,015 and SMRT has a bus fleet of 1,021. Assuming that the number of buses to be added will be proportionately distributed between SBS Transit and SMRT, out of the 800 additional buses, SMRT will add to their fleet 200 buses, or one-quarter of the buses. This would roughly mean that 100 buses will be added to SMRT’s fleet in 2013 and 2014 each.

Thus it looks like the government’s plan to add more buses is to not in anticipation for a higher ridership. Rather, it is to alleviate the crowding in buses that could currently be faced by commuters. This should be seen favourably.

But the question is, would SMRT have been able to afford to buy the additional buses on their own? Of the 800 new buses, the government is buying 70% of the buses. Accordingly, in 2013 and 2014, SMRT would be buying another 30 out of the 100 additional buses, as can be seen in Chart 10. This is similar to the number that they had increased their bus fleet by in 2012. Yet, in 2010 and 2011, SMRT had increased their bus fleet by more than twice what they had done in 2012, and could continue to increase the revenue earned, at least in 2011. 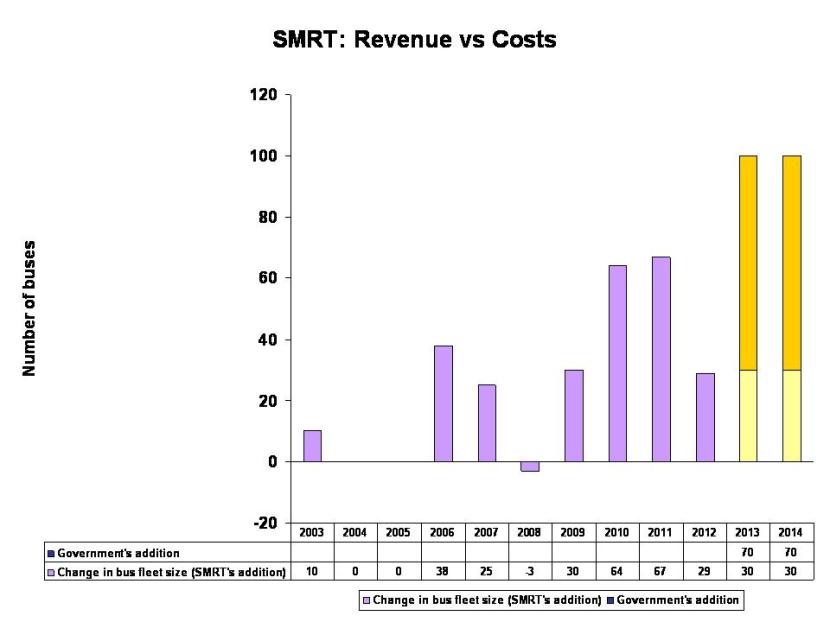 So, would SMRT be able to continue to increase their revenue, even if they were to purchase the 100 buses by themselves? It is likely that they would. But if left on their own mechanism, they might perhaps increase the bus fleet by only 30, or at most, 50.

Thus the government’s strategy seems to be top up the additional buses, on top of what the PTOs would buy, according to their own estimates as to how many more buses would be required to alleviate the bus loads.

Just by looking at the statistics, I would surmise the following:

Just by looking at the statistics, I would suggest that the government’s intention to increase fares and the $1.1 billion investment for additional buses is a sensible one.

However, what then would account for the disagreement by Singaporeans with the government’s decision? I would propose the following:

So, what is the real problem and what can we do about it?

The current problems that Singapore faces is due to a government which believes that it knows what is right and what needs to be done, and believes that it does not need to explain to the people about its actions. However, because the people feel that their livelihood is threatened, they no longer believe that the government has their interests at heart and do not trust the government. The problem is exacerbated by a lack of transparency and information access by the people on how the government makes decisions and uses their money. As such, the foundation of trust that the country needs to  built on is severely weakened.

A concerted effort by the government to clearly explain their decision-making and actions, and to consult with the people, needs to be complemented by a more critically-thinking population who is willing to look in more depth into the government’s decisions and actions.

Statistics for SMRT are obtained from SMRT’s annual reports which can be found here. The analysis in this article is only accurate as far as the statistics reported have not been manipulated.