Do rich countries pay their people higher wages? Logically, the richer a country is, the higher the people’s wages should be, right? Let’s take a look.

In this article, you will see several charts. I’ve structured the this article to make it very easy to understand the flow. Please take some time to read through it.

In Chart 1, from left to right, you can see the richest to the relatively less rich countries (as measured by their GDP per capita) represented by the orange bars. Singapore is the one of the richest countries in the world. In this chart, Singapore is ranked second.

Interestingly, except for the top 4 richest countries (where the arrows are pointing), the majority of the countries in this chart have higher national average salaries, as compared to their GDP per capita. Of course, we might argue that since the top 4 richest countries are so rich, perhaps even as they already have very high average salaries, these still cannot match up to their GDP per capita.

However, if you look at Singapore and Hong Kong, the national average salaries are actually significantly lower than the GDP per capita.

(Source: Human Development Report 2013, BBC Global migrants: Which are the most wanted professions?

For a clearer picture, you can see in Chart 2, where the countries are ranked, from left to right, according to their national average salaries. You can see that even though Singapore has the second highest GDP per capita, we actually have the third lowest average salary.

For New Zealand, they might have a lower national average salary than Singapore but unlike Singapore, this matches their GDP per capita.

For Singapore, our national average salary is US$22,199 lower than our GDP per capita.

In Chart 4, you can see this difference, expressed in percentage terms, where Singapore’s national average salary is 41% lower than our GDP per capita.

But why do Singaporeans get paid comparatively low salaries, even though we are one of the richest countries in the world? Where is all this money going?

If you look at Chart 5, we actually have the second highest income inequality in this chart, and actually among all the economically developed countries, after Hong Kong. Our high income inequality explains why even as the country is rich, the wealth isn’t equally distributed, where our comparatively low average salaries show that there there is a large pool of lower income earners, and a group of super-rich who are amassing the wealth. 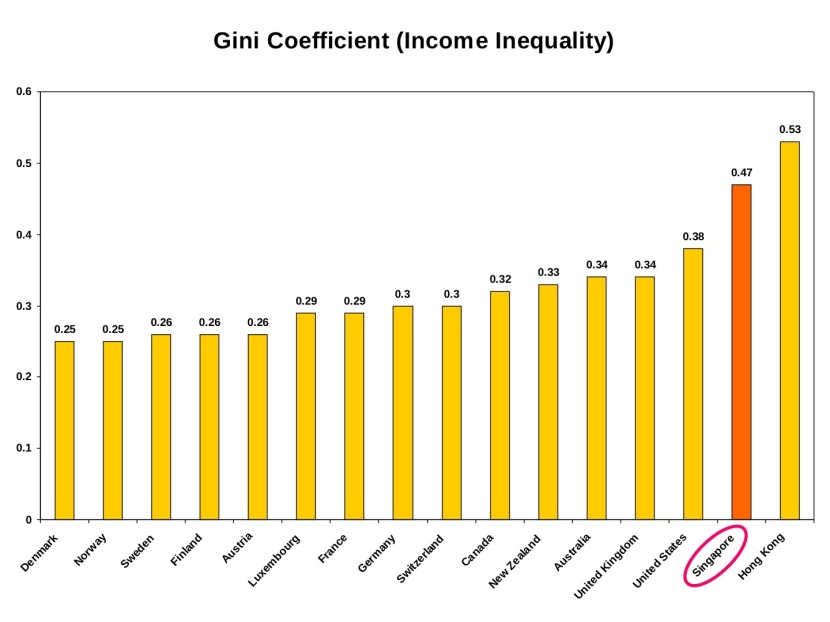 On the flip side, you can see in Chart 6 that due to our comparatively low national average salaries and a huge income gap where relatively more Singaporeans are earning lower wages, our purchasing power is also one of the lowest in the economically developed countries.

Yet, for one of the richest countries in the world, isn’t it surprising that we have such weak purchasing power? Logically, shouldn’t we be able to afford more?

If the people aren’t able to have a respectable purchasing power, where is the money going? Or rather, what do people have to spend on?

In Chart 7, you can see that when it comes to healthcare expenditure, Singaporeans have to fork out their own money to pay for 64% of our bills – the highest among the economically developed countries. Even America, with the next highest private expenditure, an American pays only about half of their healthcare bills.

So, on top of having a comparatively low average salary, where the wealth of our nation isn’t flowing back, Singaporeans are also made to pay more for their healthcare needs, stretching their already low salaries further.

In Chart 8, you can see that our low wages and the high cost of living in Singapore has thus led to a situation where we have the lowest retirement incomes among the economically developed countries in this chart. Even New Zealand, which has a lower national average salary can afford to save more than Singaporeans. 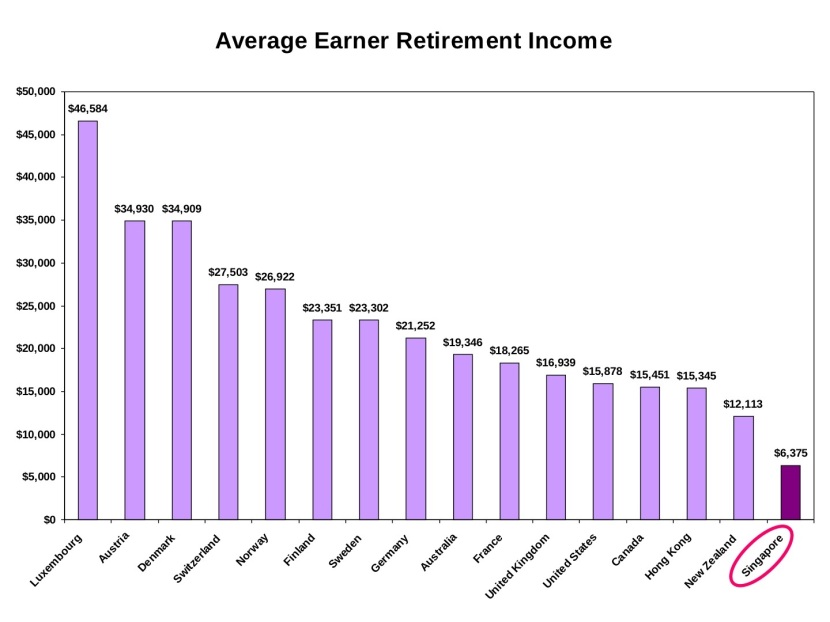 Coupled with high costs, you would understand why, with our meager incomes, the problem of livelihood would be much further exacerbated among retiree Singaporeans. It is thus not surprising when our older Singaporeans are left without a choice but to work as cleaners and labourers even as they should be allowed to live their old age pursuing activities which they have long postponed, because of work.

The often-argued point is that Singapore simply doesn’t have enough money to increase our social welfare spending because of our low taxes, so we cannot afford to increase our spending for the poor, or for further government expenditure on our healthcare bills, for example.

But is this so?

Chart 9 shows that among the countries compared, we have the highest surplus, as a proportion of GDP.

Chart 10 shows that we have the second highest reserves, as a percentage of GDP. 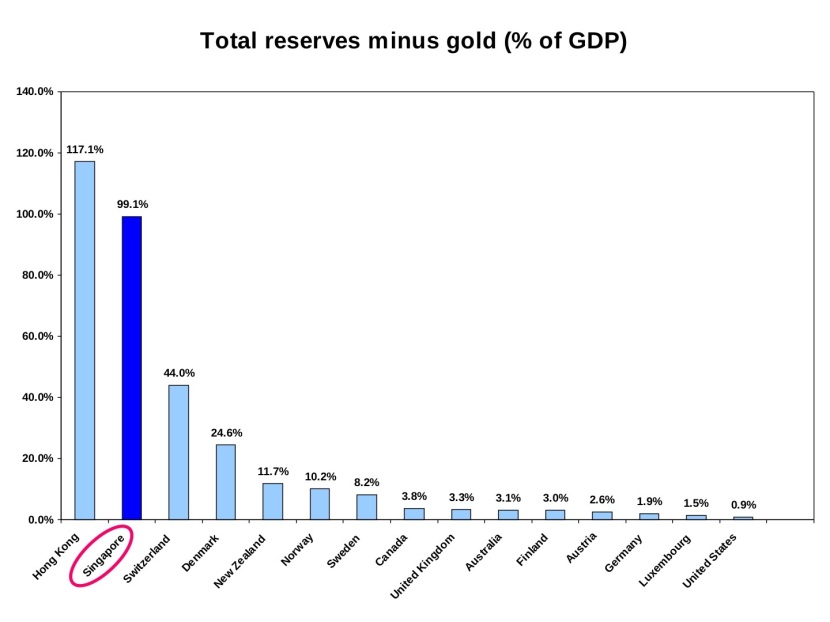 In absolute terms, this means that Singapore has nearly $260 billion in our reserves, which is third among the countries compared, as Chart 11 shows. 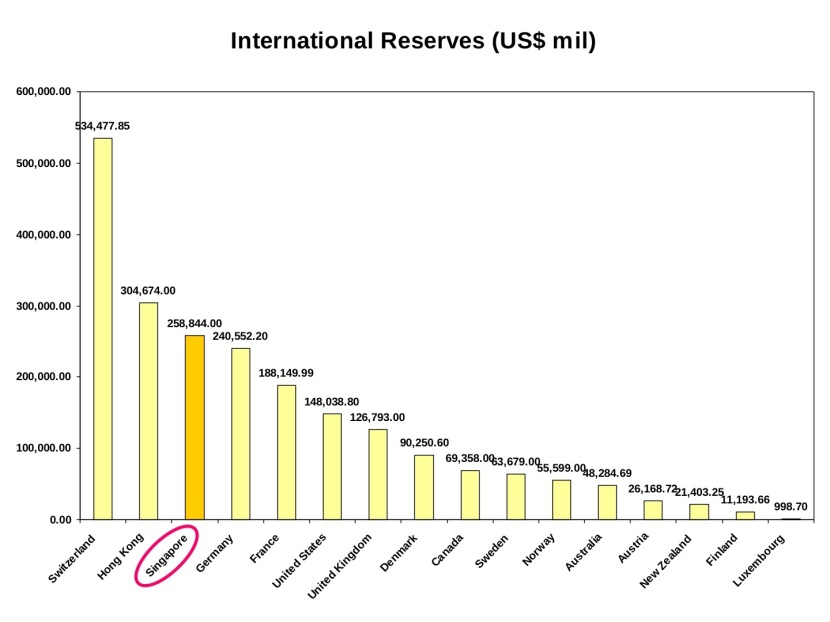 So, do we have enough money? Clearly, we do. Clearly, the government has sufficient, and in fact, much more than just ‘enough’ to provide for the social welfare needs of Singaporeans. Yet, our government continues to allow the people’s wages to be depressed, even as the rich gets richer, and the people are expected to fork out more of their diminishing wages on the higher and higher prices of goods and services.

Yet, all this time, our political leaders earn significantly higher salaries than the average Singaporeans, as you can see in Chart 12. Our prime minister Lee Hsien Loong earns S$2.2 million annually (not inclusive of bonus), which is several times higher than the next highest paid political leader in Hong Kong. And as someone on my Facebook had pointed out, if you look at the salary per capita, our prime minister is actually paid several hundred times more than the American president. 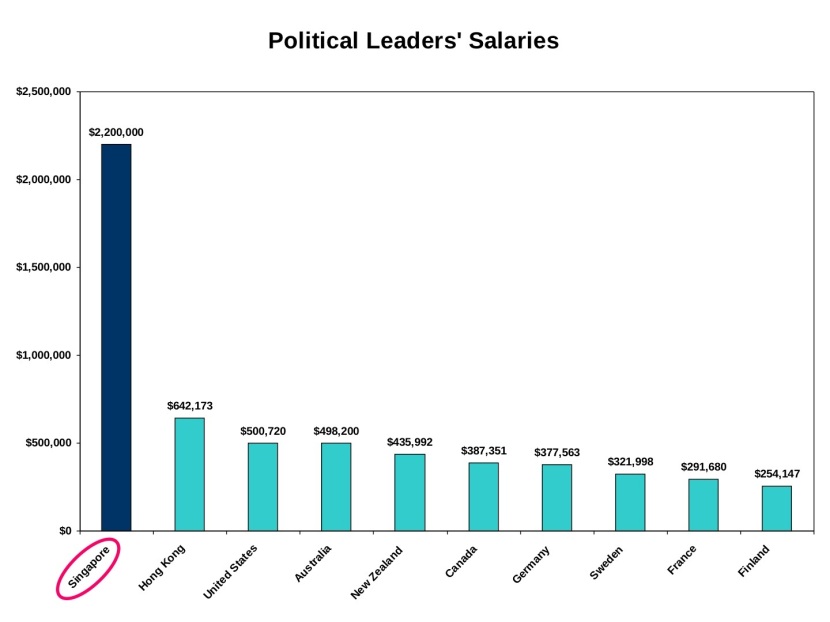 So, by now, you can see in Chart 13, that Singapore is one of the richest countries in the world, in terms of GDP per capita (orange bar), yet we have one of the lowest average salaries in the economically developed world (green bar), which is not on par with our country’s wealth. Not only that, even as a very rich country, our people have the lowest average retirement income (blue bar). 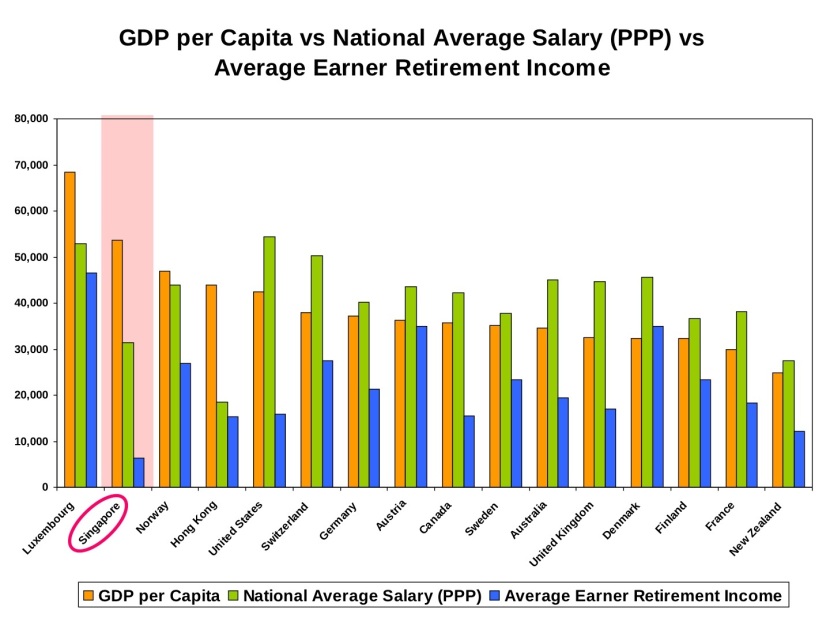 Such shameful outcomes can be explained in Chart 14 where there is a considerably high income inequality (green bar), which results in Singaporeans having low average salaries, and coupled with high and rising costs, one of the lowest purchasing powers (yellow-orange bar) as well.

Finally, in Chart 15, we can see that even as our government allows the average salaries of Singaporeans to remain low, they have allowed themselves to earn the highest political salaries in the world, several times more than the next highest paid political leader.

(Source: Yahoo The 7 Highest Paid Political Leaders in the World (2013))

Not only can we see clearly where the high income inequality arises from and how the government sets the precedence as to how the rich would then learn to exploit the rest to further divide society, this also brings to fore a much larger question – why does the government allow the people to suffer while they continue to sit on their high pedestal, denying Singaporeans of a respectable livelihood, where the people have the lowest purchasing power and retirement incomes (among the economically-developed countries) – and for the richest country in the world!

Yet, how can self-sufficiency come to realisation when the government doesn’t allow the people’s wages to rise in tandem with increasing prices and the cost of living? How can the people be expected to fork out more for ever-rising healthcare costs, where their purchasing power is an embarrassment to the wealth that the country has amassed, and where the government continues to hide from its responsibility to protect the people?

All is not well in Singapore. Of course, Singapore is still comparatively much better off than most economically-less developed countries, at least in the material sense. Yet, for a country which is ranked the least happy people in the world by Gallup, what does the material wealth mean, when the people are emotionally and psychologically in such dire state of poverty? What does money mean when deep within, we are empty individuals who snide at others because of our inability to find joy within ourselves that we have to hurt another, just so that we can even be slightly compensated.

Where is our government’s morality in this? Do they not care for the people’s well-being at all? For political leaders who earn millions, has the joy that they have afforded themselves to buy blind them to the reality of the inner poverty that the people face?

The immediate solution is for the government to ensure that people are paid fair wages, where they are able to afford a respectable living, in the face of rising costs. However, if the government is unwilling to do so, it should ensure that prices do not rise or should rise in tandem with the increase of wages, or lack thereof. If the government continues to squeeze the people on all fronts, by depressing wages and increasing costs, this will lead to a very depressing state of health for the Singaporean society. Budget 2013 had taken baby steps to resolve our deep-seated problems of more than a decade-old but the question is, are they enough?

Singapore is in dire need for bold and dynamic changes to kick start our chugging engine. Our government is losing its moral authority at an ever quickening pace, where the trust among the people towards it is eroding at light speed. Such is the state of being when a government forgets its responsibility towards the people that had put it in power.

It is not sufficient at this point for the government to continue to make piecemeal changes when what we need are bold, reformist moves which understands where the root of the problem is, drill down to the problem and provide the necessary impetus to spur Singapore and Singaporeans into a new era of reformist dynamism and reignited passion and energy.