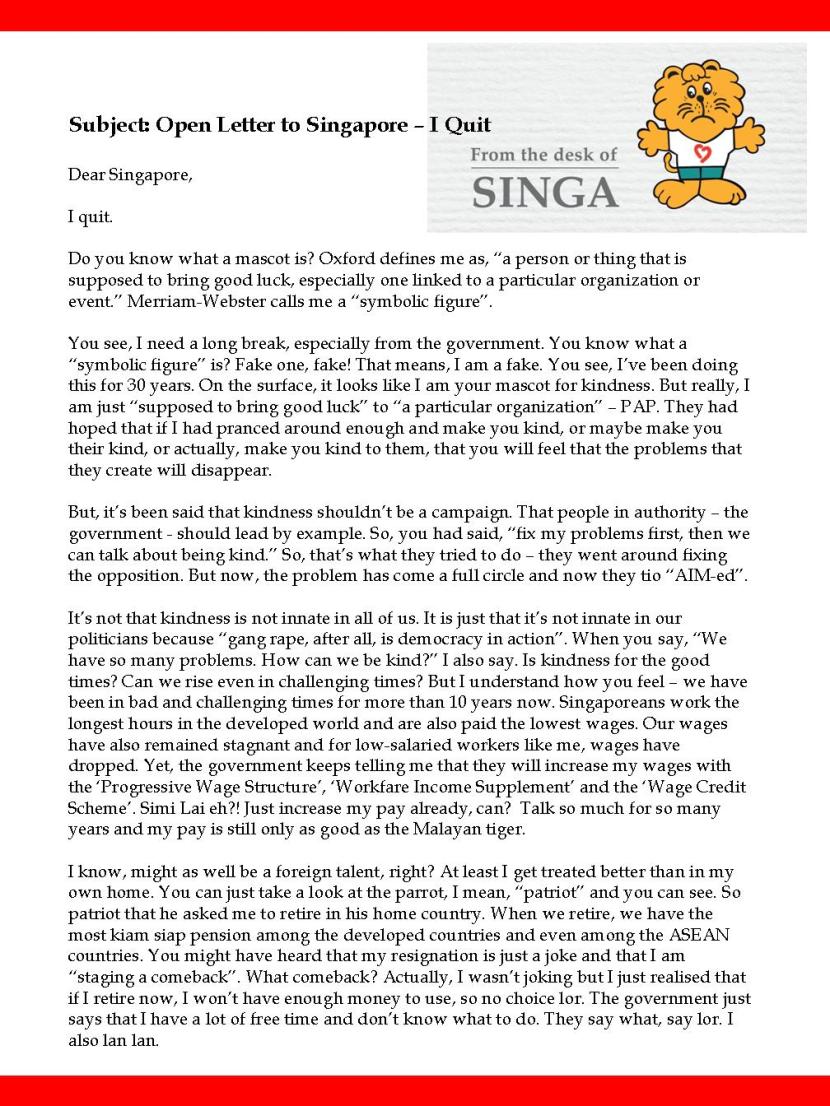 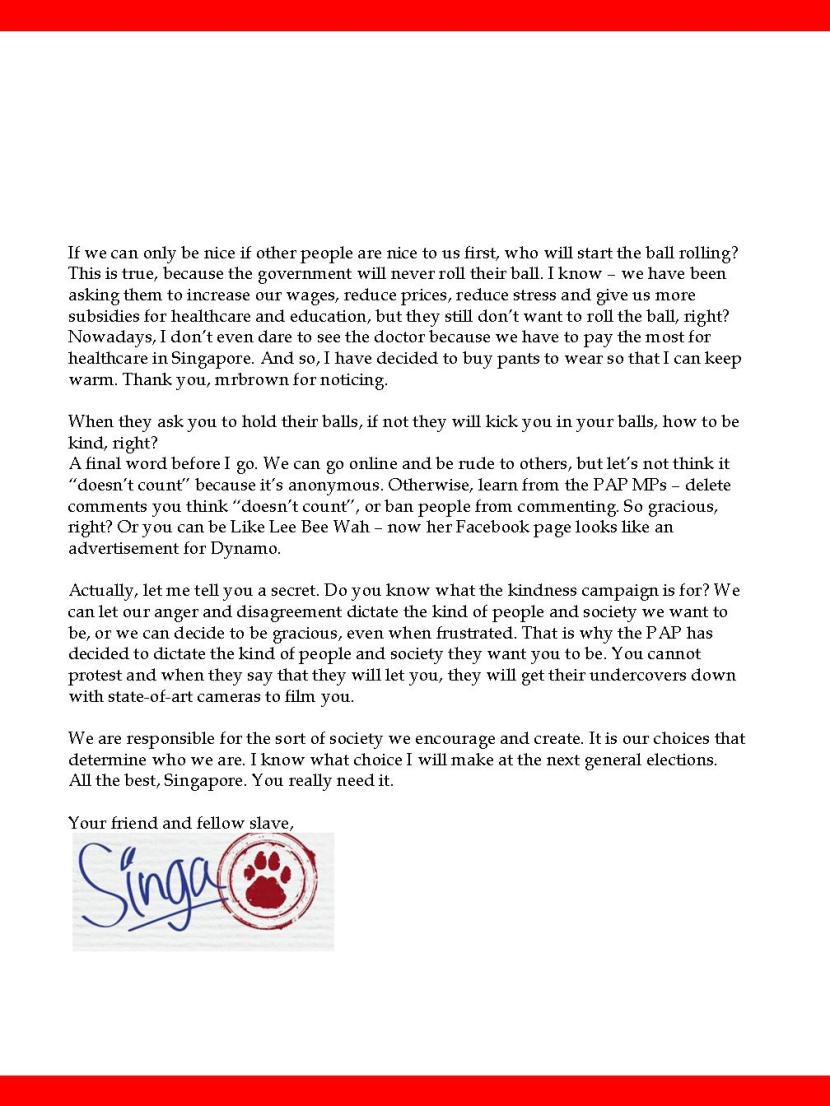 Do you know what a mascot is? Oxford defines me as, “a person or thing that is supposed to bring good luck, especially one linked to a particular organization or event.” Merriam-Webster calls me a “symbolic figure”.

You see, I need a long break, especially from the government. You know what a “symbolic figure” is? Fake one, fake! That means, I am a fake. You see, I’ve been doing this for 30 years. On the surface, it looks like I am your mascot for kindness. But really, I am just “supposed to bring good luck” to “a particular organization” – PAP. They had hoped that if I had pranced around enough and make you kind, or maybe make you their kind, or actually, make you kind to them, that you will feel that the problems that they create will disappear.

But, it’s been said that kindness shouldn’t be a campaign. That people in authority – the government – should lead by example. So, you had said, “fix my problems first, then we can talk about being kind.” So, that’s what they tried to do – they went around fixing the opposition. But now, the problem has come a full circle and now they tio “AIM-ed”.

It’s not that kindness is not innate in all of us. It is just that it’s not innate in our politicians because “gang rape, after all, is democracy in action”. When you say, “We have so many problems. How can we be kind?” I also say. Is kindness for the good times? Can we rise even in challenging times? But I understand how you feel – we have been in bad and challenging times for more than 10 years now. Singaporeans work the longest hours in the developed world and are also paid the lowest wages. Our wages have also remained stagnant and for low-salaried workers like me, wages have dropped. Yet, the government keeps telling me that they will increase my wages with the ‘Progressive Wage Structure’, ‘Workfare Income Supplement’ and the ‘Wage Credit Scheme’. Simi Lai eh?! Just increase my pay already, can?  Talk so much for so many years and my pay is still only as good as the Malayan tiger.

I know, might as well be a foreign talent, right? At least I get treated better than in my own home. You can just take a look at the parrot, I mean, “patriot” and you can see. So patriot that he asked me to retire in his home country. When we retire, we have the most kiam siap pension among the developed countries and even among the ASEAN countries. You might have heard that my resignation is just a joke and that I am “staging a comeback”. What comeback? Actually, I wasn’t joking but I just realised that if I retire now, I won’t have enough money to use, so no choice lor. The government just says that I have a lot of free time and don’t know what to do. They say what, say lor. I also lan lan.

If we can only be nice if other people are nice to us first, who will start the ball rolling? This is true, because the government will never roll their ball. I know – we have been asking them to increase our wages, reduce prices, reduce stress and give us more subsidies for healthcare and education, but they still don’t want to roll the ball, right? Nowadays, I don’t even dare to see the doctor because we have to pay the most for healthcare in Singapore. And so, I have decided to buy pants to wear so that I can keep warm. Thank you, mrbrown for noticing.

When they ask you to hold their balls, if not they will kick you in your balls, how to be kind, right?

A final word before I go. We can go online and be rude to others, but let’s not think it “doesn’t count” because it’s anonymous. Otherwise, learn from the PAP MPs – delete comments you think “doesn’t count”, or ban people from commenting. So gracious, right? Or you can be Like Lee Bee Wah – now her Facebook page looks like an advertisement for Dynamo.

Actually, let me tell you a secret. Do you know what the kindness campaign is for? We can let our anger and disagreement dictate the kind of people and society we want to be, or we can decide to be gracious, even when frustrated. That is why the PAP has decided to dictate the kind of people and society they want you to be. You cannot protest and when they say that they will let you, they will get their undercovers down with state-of-art cameras to film you.

We are responsible for the sort of society we encourage and create. It is our choices that determine who we are. I know what choice I will make at the next general elections.

All the best, Singapore. You really need it.

Your friend and fellow slave,