(This article is a clarification on a defamatory article that was published on Five Stars and A Moon against The Heart Truths.)

Today, more than 100 websites in Singapore are on blackout to protest against Internet Censorship.

Today, a Singapore website, Five Stars and A Moon (FSA2M), had also used the opportunity to publish an article which defames The Heart Truths. FSA2M has also chosen not to go on a blackout.

FSA2M had published an article today to discredit an article that I had written previously.

You can see the article that I had written previously here:https://thehearttruths.com/2013/05/25/singaporeans-the-truth-about-our-wages-revealed/

While you read FSA2M’s article, please tolerate the tone of voice as the writer had taken a very personal tone in the article.

(1) In the article, “Pearlie” had claimed that I did not reveal the truth about the Lee Kuan Yew School of Public Policy’s dispute on the UBS report, which had ranked Singapore as the city with the lowest wages in the world in the developed world.

This is not accurate. I did. I had stated that, “even in their adjusted rankings, Singapore’s wage level fell below that of New York, London and Tokyo, even though our GDP per capita is on par with them.” (Please see in Chart 1 the actual chart from the school.) 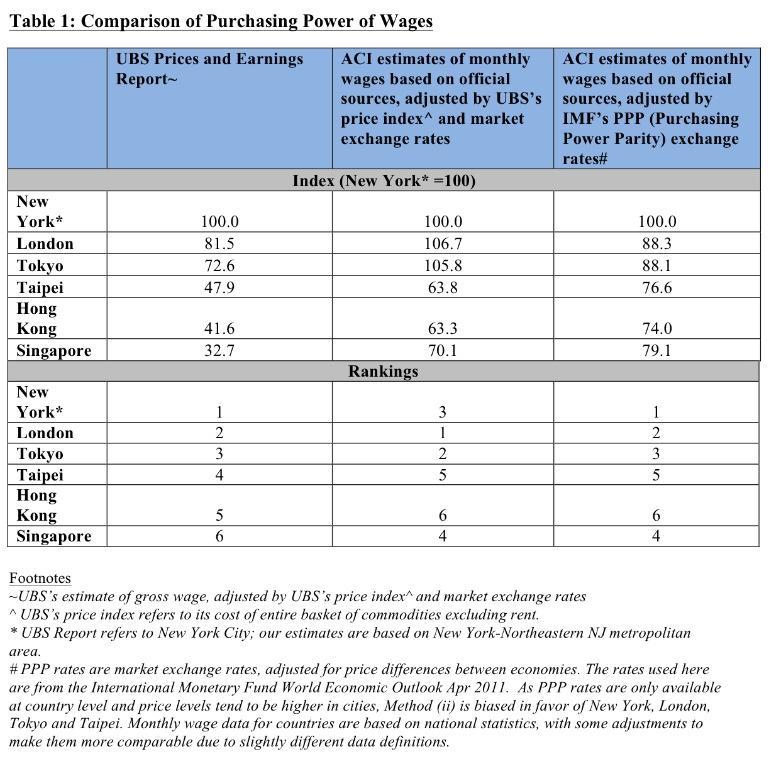 (2) Pearlie had also claimed that the figures that I had used in the International comparison of hourly direct pay for time worked in manufacturing in 2010 is a mistake.

Again, this is inaccurate. I had obtained the statistics from the International Labour Organisation’s Global Wage Report 2012/13. Singapore’s wage is indeed US$12.68 and is the lowest among all the developed countries (Please see in Chart 2 the actual chart from the report.) 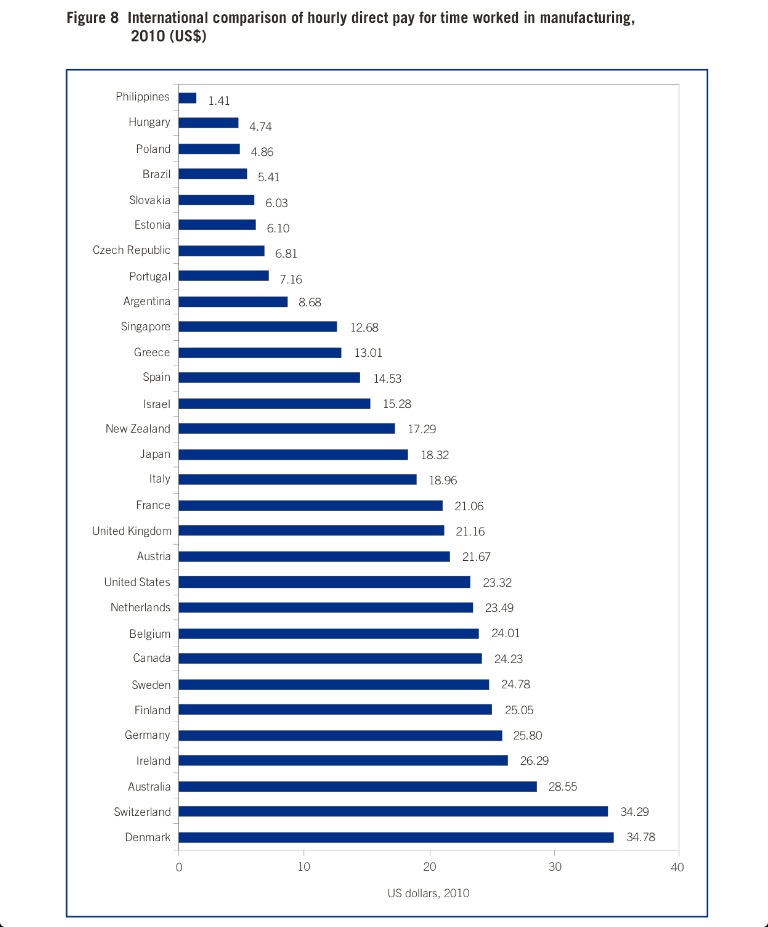 (3) Finally, Pearlie had wanted to make a point that Singapore’s hourly compensation costs in manufacturing is actually US$19.10. However, if you look at the news release that Pearlie had quoted from, even at US$19.10, Singaporeans continue to earn the lowest wages in the developed country (after South Korea and Taiwan). (Please see in Chart 3 the actual table from the news release.)

Also, might I remind Pearlie to please look at Table 3 in the same news release, where the actual pay for time worked for Singapore is indeed US$12.68, which is exactly what was reported by the International Labour Organisation. 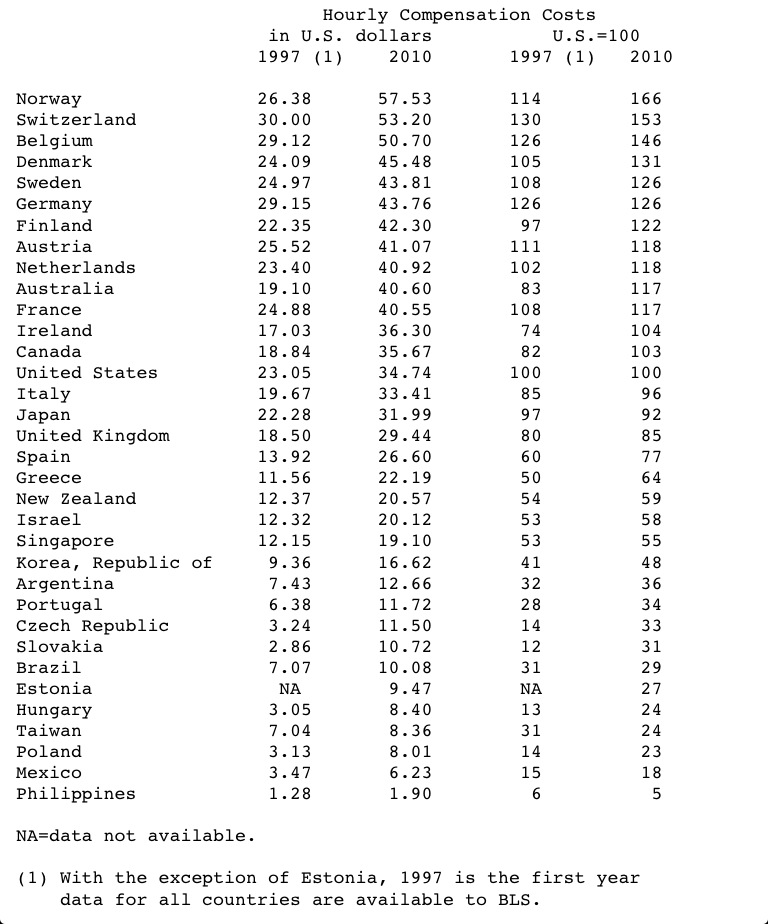 Five Stars and A Moon’s Poor Journalism Standards is Appalling

Now, I am uncertain as to what FSA2M and Pearlie had hoped to achieve with this information – clearly, Singapore still fares very badly, as compared to the other developed countries. This is especially more significant when Singapore is the richest country, by GDP per capita.

It also perplexes me how Pearlie would want to defame The Heart Truths and discredit the article simply by pointing out two statistics which she cannot justifiably argue against.

Also, in my article, I had brought out many other statistics which Pearlie had chosen not to debate on. Were these statistics accurate and truthful, that Pearlie had no other arguments against? I urge readers to read the article that I had written and form your own opinions about this.

It perplexes me why FSA2M would want to publish such a poorly written letter and an unintelligible response which continuously makes snide remarks at my character. It is unbecoming of a website which claims to, “write about problems, solutions and facts in very simple language … (and that) The only boundary that we will not cross, is the boundary of honesty – what we write has to reflect our beliefs of rational thinking, diplomacy and sound policy making.”

FSA2M might need to seriously consider the capabilities of their editorial team in publishing articles of discerning quality. A simplistic letter arguing on two statistics in my article, which had more 22 charts, is hardly a reputable justification nor debate against the article that I had written. FSA2M showed poor taste in allowing the article to be published. It is obnoxiously peculiar why FSA2M had allowed a letter with such poor reasoning to be even published on their website.

FSA2M had aimed to publish articles “in very simple language”. Perhaps too simple, I would think. And the language use by Pearlie shows a severe lack of judgement among the FSA2M team in allowing the letter to get through their editorial lens. I would urge all critical readers to be discerning in what you read from FSA2M, if this letter is anything to go by.

The Heart Truths Will Not Take Legal Action or Sue For Defamation, In Respect for Democracy

The publication of this letter by FSA2M and Pearlie is an insult to my personal character and one which I do not take lightly. However, in light of the respect to our democratic space, I do not believe in using the defamation law against any person, because civil discourse and exchange is much more favourable and respectable in any situation. And if I were able to stand up for the information that I put out, as I have, there would be no need to use the defamation law or threats.

Also, in light of #FreeMyInternet’s call to prevent Internet censorship in Singapore, I would urge all readers to read both The Heart Truths and FSA2M’s letter, to form your own informed opinion of the issue.

This episode has shown that the new licensing rule that had been introduced by the Media Development Authority is unnecessary. I am very much able to coherently argue my point across. And I believe that if readers are discerning, they would be able to make out what is “news” and what is simply “newsworthy”, as FSA2M had shown.

Stand Up For Your Right To Read, Know And Think Today

I would thus like to urge Singaporeans to take a stand to protect your freedom of speech, and freedom to think. Internet censorship has dire consequences to what we would be able to read, and whether we are able to make informed choices in our own country.

Please come down this Saturday to the protest against Internet censorship. You can join the Facebook event page here: https://www.facebook.com/events/185882738236629/

Please also sign the online petition to protect our rights to read, know and think here:http://www.petitions24.com/petition_for_the_immediate_withdrawal_of_the_licensing_regime

FSA2M, this is a major self-pawn. Thank you for the opportunity to engage Singaporeans on a deeper level.