At the most basic, what monetary concerns would affect you as an individual? For the purpose of this article, I will put it as wages, prices and retirement savings.

At the optimum, wages, prices and retirement savings should rise in tandem with one another (Chart 1).

But is this happening in Singapore? Have wages been growing in tandem with increasing prices?

As mentioned many times now, Singapore has the lowest wages among the other developed countries with similar high-incomes (Chart 2).

We also have the lowest wages when comparing manufacturing work (Chart 3).

In fact, over the past decade, wages have not only grown the slowest, but actually fell (Chart 4).

And another report also shows that our wages had dropped (Chart 5)!

And even though Singapore has the lowest wage among the high-income developed countries, prices in Singapore are actually quite high (Chart 6).

In fact, Singapore has been ranked the 5th most expensive city in the world (among 214 cities) by Mercer (Chart 7).

It was also ranked the 6th most expensive in the world by the World Cities Review (Chart 8). 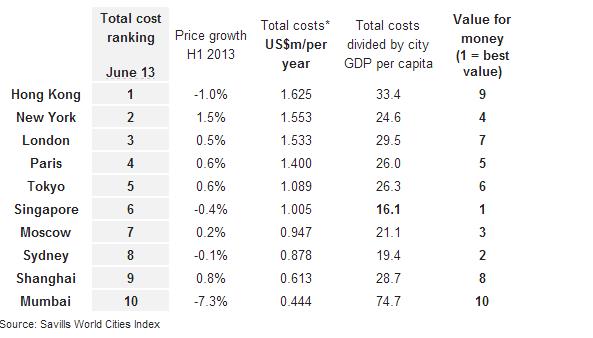 If we look at other prices, Singaporeans actually also pay the highest out-of-pocket for healthcare (Chart 9).

In fact, what Singaporeans are paying out-of-pocket is growing much faster than what the government is spending on healthcare (Chart 10). 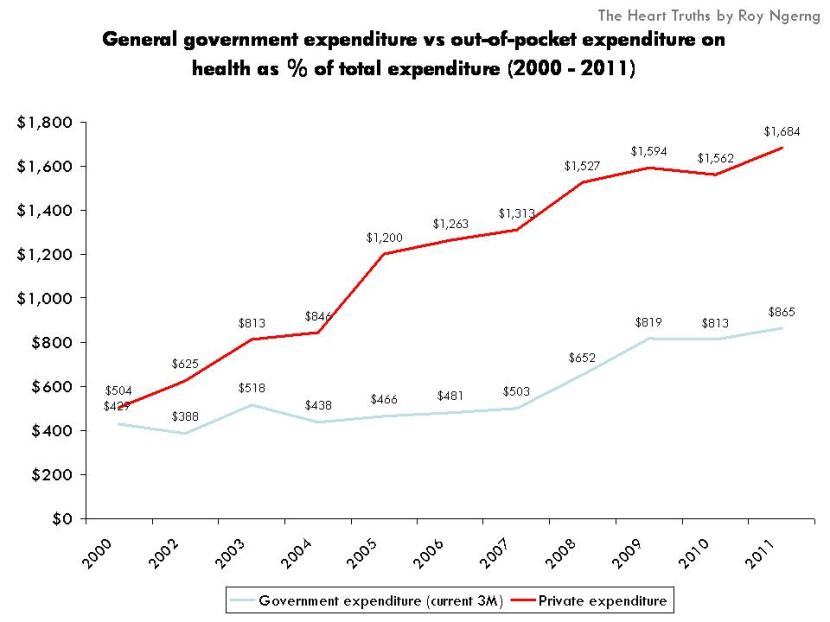 We also have one of the highest housing prices in the world (Chart 11). 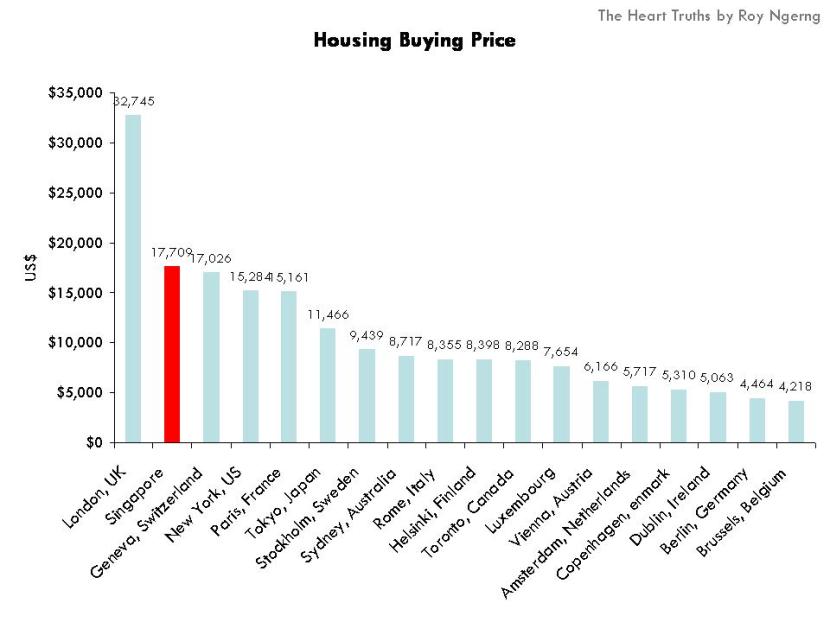 Which means that we thus have the lowest purchasing power among the high-income developed countries (Chart 12).

It’s not just one report which says this – another report also says that we have the lowest purchasing power among the high-income developed countries (Chart 13)!

And so, because we have such low wages, while prices are yet so high, our purchasing power has become so low that we have next to little for our savings.

Singaporeans have the least adequate retirement funds among the developed countries (Chart 14).

Another report says the same thing – we have the smallest retirement funds (Chart 15).

Yet again another one which shows that we have the smallest retirement funds (Chart 16).

All in, that explains why fewer and fewer Singaporeans are able to set aside enough into their retirement funds to set the minimum sum in their CPF, as mandated by the PAP (Chart 17).

Meanwhile, what’s happening at the workplace? Why are Singaporeans earning such low wages?

It’s because there is no minimum wage in Singapore (Chart 18).

Companies also share that costs have become so high that it has become prohibitive for their businesses (Chart 19).

In particular, they say rents are the heaviest burden which prevents them from channelling cost savings to the workers (Chart 20). 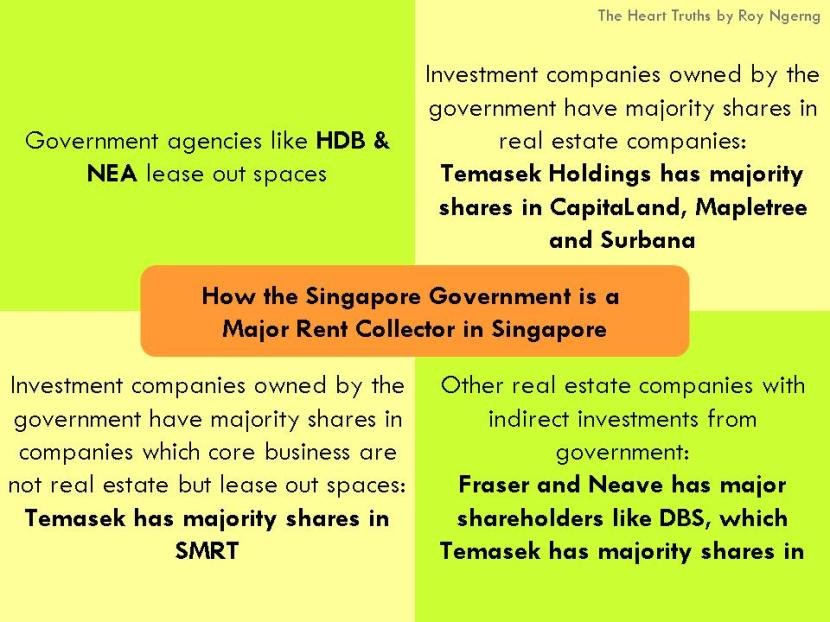 Meanwhile, not only that, the higher management in the Singapore companies earn the highest wages in the world (Chart 22). 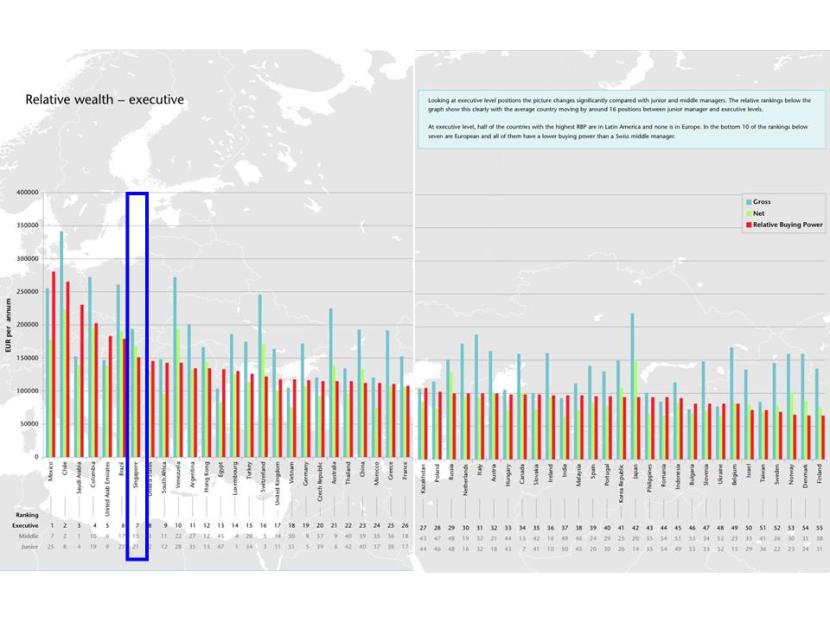 They also pay the lowest taxes in the world (Chart 23). 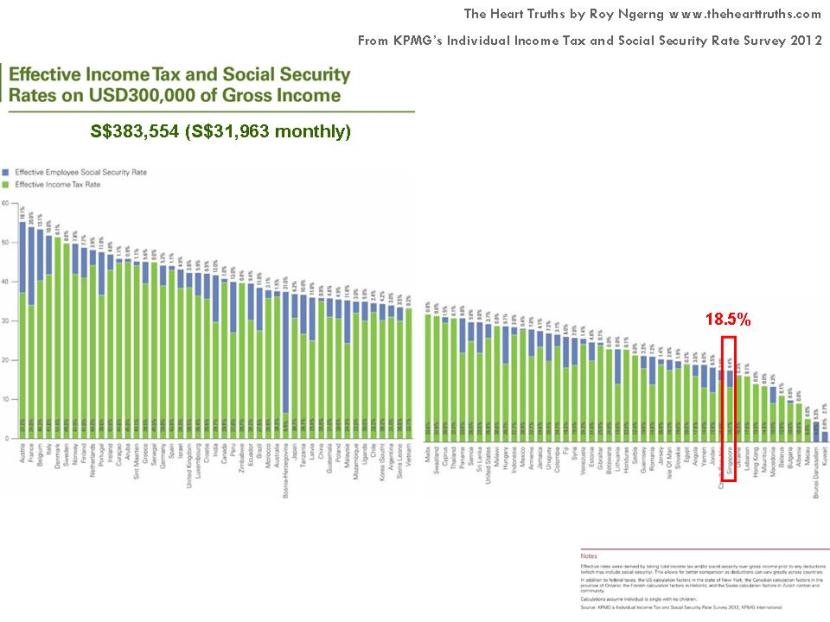 If you look at Chart 24, Singaporeans who earn up to $5,000 are paying the most to taxes and CPF – they have the smallest purchasing power.

Chart 24: The Heart Truths How Are Taxes Built For The Rich In Singapore?

And do you know that there are 75% of Singaporeans who are earning up to $5,000 (Chart 25)? This means that at least 75% have to live on lower wages, and have a larger chunk of their wages taken out, leaving lesser for them, than the richest in Singapore.

Meanwhile, the richest in Singapore who run the Singapore companies earn the highest wages and pay the lowest taxes in the world.

And more importantly, which are the largest companies in Singapore? Many of them are Singapore companies, and owned by the Temasek Holdings, which is owned by the government (Chart 26).

So much so that wage share in Singapore is the lowest among the high-income developed countries (Chart 27), which means that profits would also be the highest.

Which explains why we have the greatest income inequality in the world (Chart 29).

Not only that, the government spends the lowest public spending among high-income developed countries (Chart 30).

Which means that the PAP did the least to reduce the income inequality – Gini coefficient was reduced by a marginal 0.021 (Chart 31).

And because of that, we most probably has the highest proportion of people living in poverty in Singapore, as compared to the other high-income developed countries (Chart 32). 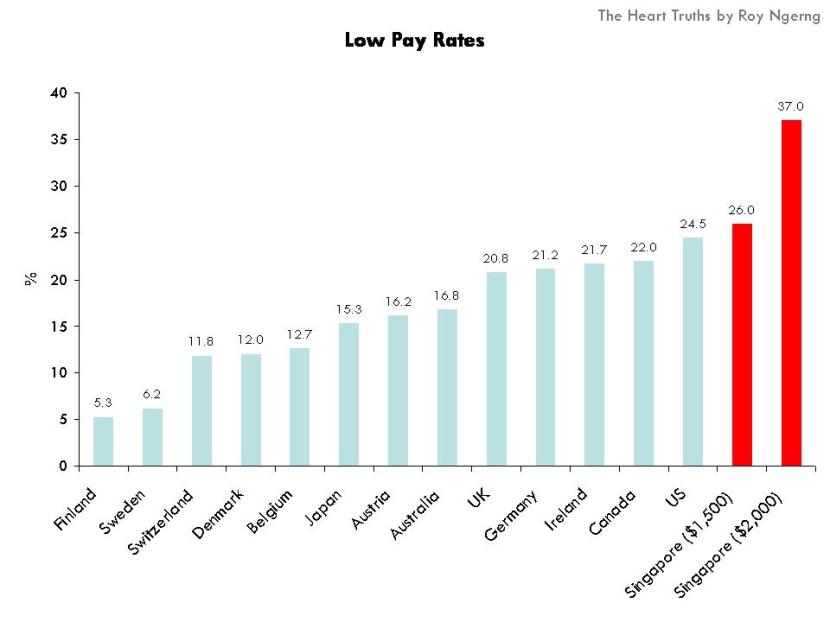 Not surprisingly, Singaporeans have thus become the most unhappy people in the world, and we have also learnt to repress our emotions because of how powerless we feel (Chart 33). What is there to laugh about when we have to work the darn hardest to make ends meet and we have to be fearful for our own lives?

And because we work the longest hours in the world (Chart 34), 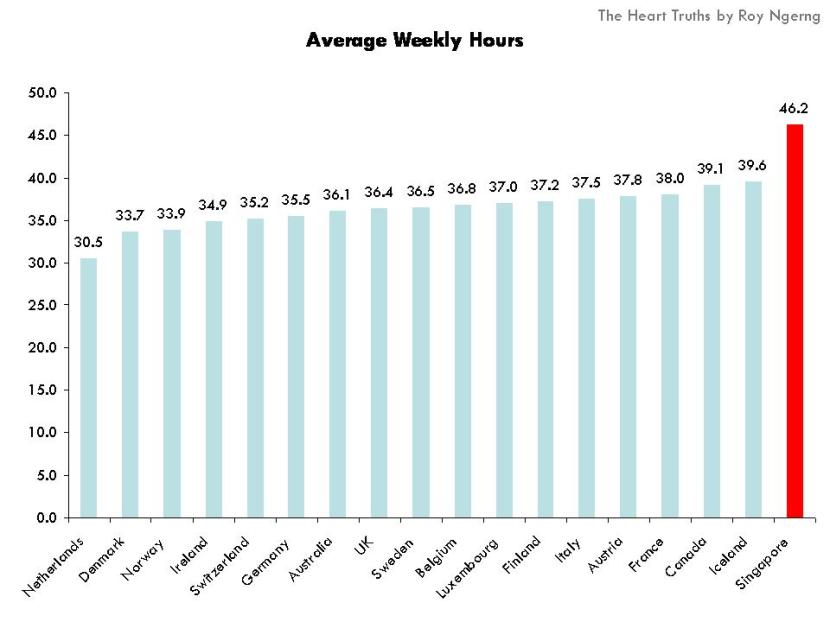 We thus have such poor work-life balance which together with the low wages and low emotional well-being, work motivation is severely crippled, which explains why we have the lowest productivity among the high-income developed countries (Chart 35). 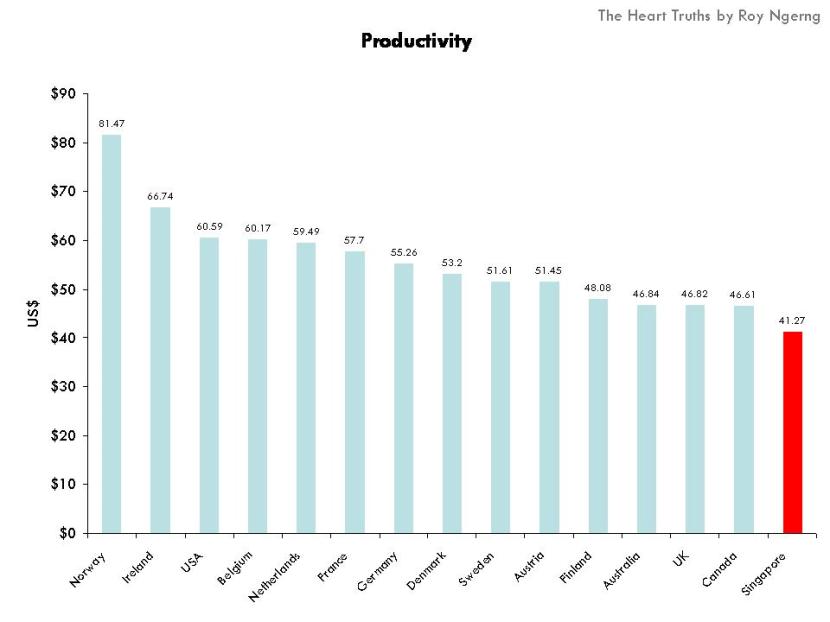 Yet, the PAP says that they will only increase our wages if our productivity grow. But this will never happen. If wages remain low, productivity will remain low which will mean the PAP will continue to keep wages low.

But this is not the end of the story. What is really happening here in Singapore is that the PAP has trapped us in a Disempowerment Cycle (Chart 36). 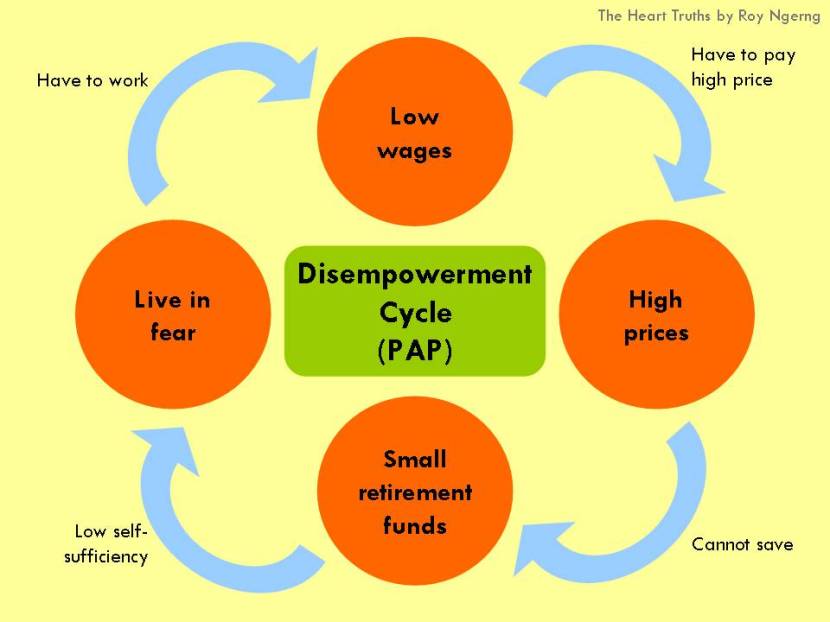 The PAP has effectively turned us into fearful submissive slaves – and I don’t mean this symbolically. Because our minds have thus become hard-wired to think of survival on a daily basis, all we can think of is to fight it out with the next person, to be the first to get to something, so that we can have enough.

This is why Singaporeans have become so self-centred.

Do you think it is healthy for us to become scurrying people who have no time to pause and think for ourselves and the people around us?

Singaporeans didn’t start off being self-centred. We used to be a lot happier, kinder and out-going.

At the start of the article, I pointed out that optimally, wages, prices and retirement funds should rise in tandem.

But in Singapore, while prices have skyrocketed, wages and retirement funds have instead diminished (Chart 37).

What do I mean when I say that the PAP has squeezed Singaporeans dry? This is exactly how they do it.

And then watch the people squirm as things become too suffocating for them.

This is PAP, my friends.

Meanwhile, the ministers are paid the highest salaries in the world. The Prime Minister is paid the highest among all political heads (Chart 38) and by some estimates, would rank at the 350th richest person in Singapore, just by income alone.

Most aptly, former top civil servant Ngiam Tong Dow had said in an article in the Today newspaper today that, “it started going downhill (in Singapore) when we started to raise ministers’ salaries, not even pegging them to the national salary but aligning them with the top 10… When you raise ministers’ salaries to the point that they’re earning millions of dollar, every minister — no matter how much he wants to turn up and tell Hsien Loong off or whatever — will hesitate when he thinks of his million-dollar salary. Even if he wants to do it, his wife will stop him.” 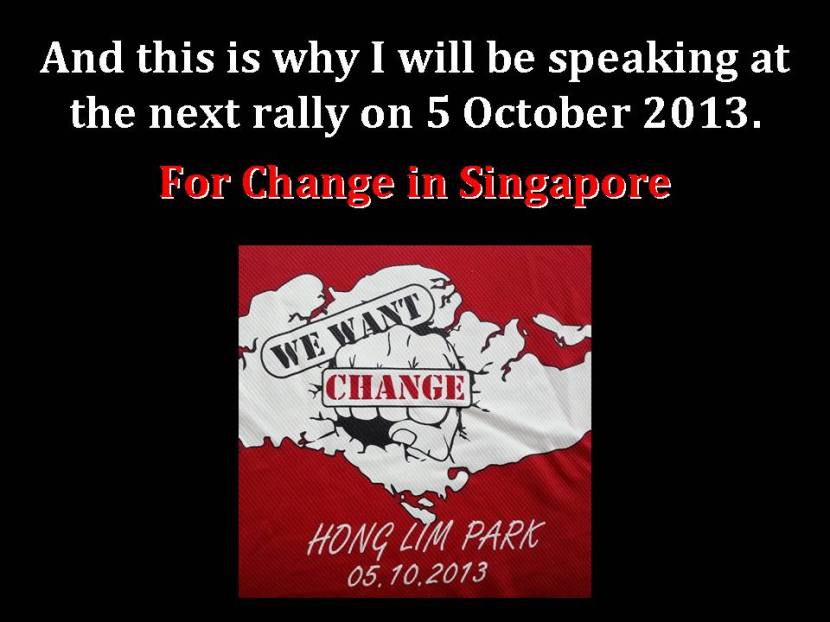