In this second part, we take a look at exactly how much we have in the 3M piggy bank, and how best it can be spent before we have to consider raising premiums or taxes.

Following his announcement during the National Day Rally 2013 to tweak the 3M system, Prime Minister Lee Hsien Loong announced that government healthcare subsidies will increase, and that the MediShield Life premiums and Medisave contribute rates will also be increased, to foot the increase in healthcare spending, because “we each have to take personal responsibility for ourselves.”

A few days later, Channel NewsAsia reported that PM Lee had “reiterated that while the government will do more, ‘good things need to be paid for’.” He also said, “If I’m discussing whether to raise taxes or not, I think I will never finish that discussion. So, one day when we have to raise taxes, the government will just have to make up its mind and say, ‘ok, I have to decide, I have to do this, I have to persuade people’, because otherwise it’s not workable.”

It was also reported in the Today newspaper that, “the government is unlikely to raise income tax to pay for the slew of healthcare, housing and infrastructure initiatives announced.” Rather, “the Goods and Services Tax (GST) might instead be the first in line for an increase should the Government need to raise revenue.”

However, as some observers have noted, Deputy Prime Minister and Finance Minister Tharman Shanmugaratnam had said in the run-up to the general election in 2011 that the GST will not be raised “at least for five years” because, he said, “there’s absolutely no reason to raise the GST.” We are only two years into this “five years”.

But how much do Singaporeans have in their MediShield and Medisave right now? And is there a need for Singaporeans to pay more, either through additional premiums or taxes?

For Medisave, in 2012, there was a total balance of $60 billion but the amount withdrawn for direct medical expenses was only $768 million – this effectively makes up only 1.3% of the total balance.

For MediShield, Parliament had also revealed that the MediShield surplus is $850 million for the last 10 years. In 2011, only $282 million MediShield claims were made. This means that only 24.9% of the known MediShield reserves had been claimed. 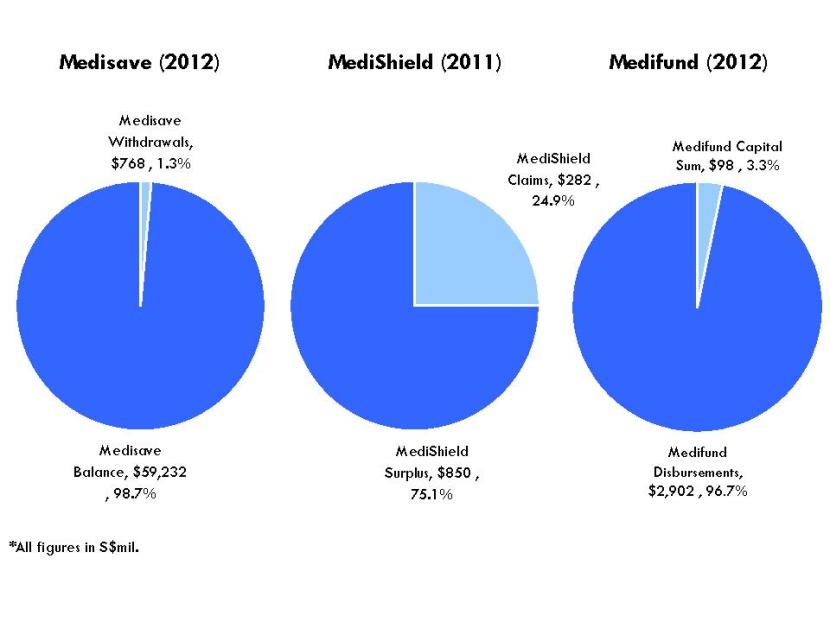 If we take these figures as an annual average, the withdrawals from Medisave make up only 1% of the balance, MediShield only 25%, and Medifund only 3%.

Adding them all up, there would be about $64 billion in balance in the 3Ms. The total of $1 billion spent would make up only 1.8% of the total 3M balance.

What’s more, if we look back at the Medisave balance, the amount has been steadily increasing while the amount withdrawn has been slowing down.

From the statistics above, it would seem that there is no deficit in running the Medisave, MediShield and Medifund schemes. On the contrary, the government is accumulating a huge surplus of more than 98% of the 3M balance.

To be clear, since the 3M schemes have high accumulated surpluses, they don’t actually cost the government a single cent. In fact, because Singaporeans are forking up the money through taxes and Medisave, they are in effect paying for their own healthcare bills by themselves. Worse yet, they are paying a portion of their own wages into these schemes, without seeing significant real returns comparable to those obtained by the government, whilst these schemes continue to accumulate surpluses.

Watch this space for part three, where we will try to work out the sums that will continue financing our healthcare needs without incurring additional taxes or premiums. And no, we are not trying to take over the Finance Minister’s job…