When the Prime Minister addressed the nation at the National Day Rally 2013, he made many proposals to tweak Singapore’s healthcare system, but also indicated a need to raise contribution rates to the 3M system (MediShield, Medisave, Medifund), or raise taxes to cover the additional costs.

However, as we have explained in earlier parts, the government is currently only spending less than 2% of the total 3M balance. Increasing the spending by 10 times to less than 20% would adequately cover the total health expenditure and still leave more than 80% in the 3M balance, for whatever it is the government might want to use it for, such as for investments.

Additionally, the Central Provident Fund (CPF) contribution rate of 20% isn’t equally applied to all income groups. Income earners who earn more than S$5,000 do not need to pay 20% of their ordinary wages to the CPF, which means that there is a gap in health revenue that exists in the regressive CPF contribution rate structure.

Thus, there is no need for the government to increase GST or taxes to fund the additional expenditure on healthcare because there is more than enough in the current coffers to do so, and more.

It would be inaccurate for the government to lead Singaporeans to believe otherwise.

The Ministry of Health had indicated that, in 2012, the government had only spent 1.4% of GDP on health. The MOH had said that it would also be “doubling our yearly healthcare budget from S$4 billion in 2011 to about S$8 billion in 2016”. According to Deputy Prime Minister and Finance Minister Tharman Shanmugaratnam, even so, this would only amount to 2% of GDP.

In March, Health Minister Gan Kim Yong said that the government will “take on a greater share of national (health) spending, from the current one-third to about 40% and possibly even further”.

However, at 2% of GDP overall and 40% of total health expenditure, the Singapore government’s spending will still be much less than the proportions spent by other developed countries.

In refuting the Worker’s Party’s Sylvia Lim, who suggested that we should “follow other developed countries, and spend an average of 6% of GDP on healthcare”, Mr Tharman said:

“I do not like the idea of a first-world safety net because what it also means is first-world taxes or first-world debts, and I do not like both ideas… If we have to take our healthcare spending to 6% of GDP… it would mean increasing the GST to about 20%. Or raising corporate income taxes to above 40%. Or lifting personal income taxes across the board and with the top rate moving to 60%.”

This begs the question as to why the Singapore government has chosen not to do so, but has instead countered that taxes, the premiums on our MediShield and the Medisave contribution rates would need to be increased.

Because of the low government expenditure on total health expenditure, Singaporeans have to pay an overwhelmingly high proportion out-of-pocket at more than 60%.

If you look at the trend in health expenditure, you can see that in 2000, the gap between what Singaporeans were paying out-of-pocket and what the government was spending was quite small, but the gap has since widened where Singaporeans are now footing their healthcare bills even more heavily. 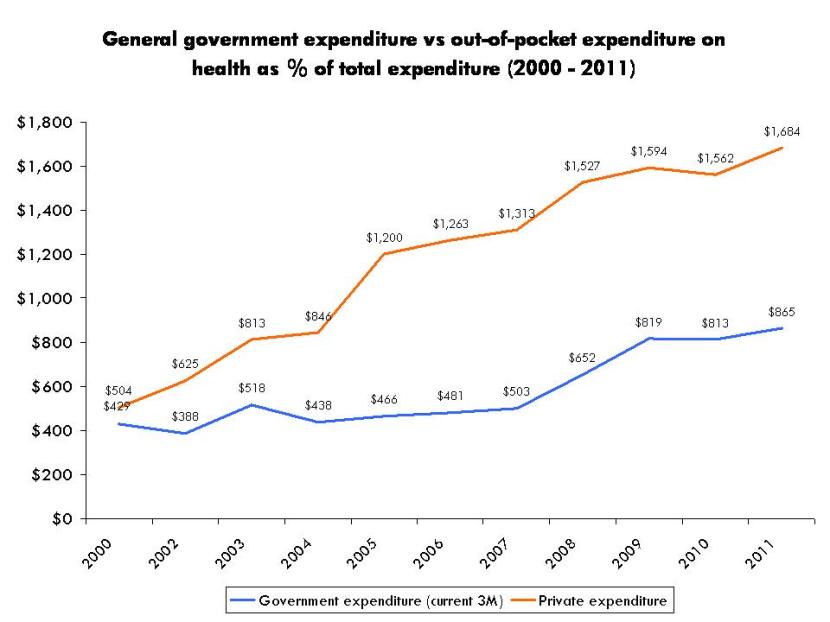 There is enough justification for the government to raise government expenditure for healthcare, before expecting Singaporeans to fork out even more.

Our high GDP per capita, the massive balance in the 3M balance, and the potential of raising revenue through a more equitable CPF contribution rate are all potential resources that the government can consider.

MK Lim puts it most aptly when he had explained in the Annals, Academy of Medicine, Singapore, “A key weakness of Singapore’s health care system is its lack of a culture of rigorous and transparent evaluation. For example, no major effort has been undertaken to gather relevant data in a systematic manner over time to assess the full impact of hospital corporatisation. Neither has the 3M system been subject to critical analysis with all the relevant data at disposal.”

Lim added that, “Formulating health policies without the benefit of health policy research is like flying an expensive passenger aircraft without instruments. Given that Singapore spends $5 billion on health care annually, and is set to invest millions more to build the base to attract the regional health care clientele, it would seem penny wise, pound foolish not to invest a tiny fraction of that to find out what works and what doesn’t.”

Until and unless the government can clearly show Singaporeans how their current contributions to the 3Ms have been and will be spent, and explore ways to maximise the efficiency of existing funds, it cannot reasonably expect Singaporeans to accept raising 3M contribution rates and taxes as a solution to fund current and future healthcare needs.

Over-consumption cannot be taken as a de-facto excuse, when we are in all likelihood facing a situation of under-consumption.