Last Sunday night, a riot took place in Singapore for the first time in 44 years.

According to Charan Bal, a university lecturer who recently completed a PhD on migrant labour politics in Singapore,

Tensions have been brewing for quite a while, and I believe these were sparked off by this bus accident. There have been tensions between migrant workers and bus drivers who ferry them from the industrial areas in the north and west to Little India every Sunday, where they do their shopping and hang out on their day off. I have taken these buses on a few occasions during my research and discovered the drivers tend to be very rude to the migrant workers.

The drivers – some are Singaporeans while others are Malaysian or Chinese – tend to be overworked and underpaid.

This comes one year after more than 170 SMRT bus drivers went on a two-day strike last year. So, are low wages a key reason that have sparked the strike and riot?

This reminds us of an article written by Professor Tommy Koh last year when he compared the wages of Singapore with the Nordic countries. 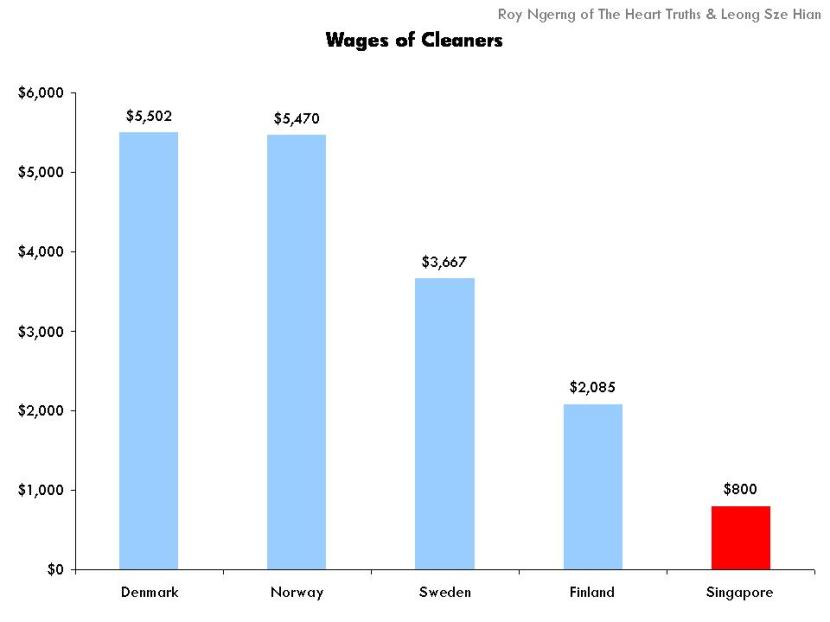 Alex Au had pointed out that, “it is well known that low-wage foreign workers don’t have an easy time in Singapore. There’s an undercurrent of grievances stemming from an experience of exploitative behaviour by high-handed bosses and supervisors. Many have reason to feel that they have been chronically cheated of part of their wages.” Indeed, Charan Bal had also said that the bus drivers “tend to be overworked and underpaid”.

Two of Singapore’s largest and most significant industrial action and civil resistance in recent years – the SMRT bus driver strikes and riot – had come in a fury, one after another, and both were a result of low wages or underlying low wage sentiments. Are low wages a cause for concern in Singapore? It shouldn’t take a rocket scientist, lest a PAP politician to understand this. Thus was it helpful for Law and Foreign Affairs Minister K Shanmugam to have said that, “there is no evidence to suggest that the foreign workers involved in the Little India riot were unhappy with their employers or the government“, as the Today newspaper had quoted? Or does it even make sense for Transport Minister Lui Tuck Yew to claim that, “in my mind it was quite evident that alcohol could have been a contributory factor“?

No doubt, low wages and oppressive working conditions are indefinitely a major contributing factor to the largest industrial action and civil resistance in Singapore over the past two years. Thus it would be insightful as to what the Committee of Inquiry that has been set up to investigate the riot would report, or not.

When we compare the wages of low-wage workers with the per capita national incomes, the wage inequality becomes even more apparent. Indeed, it is the case that the richer a country is, the higher the wage a worker can receive in the country. Yet, why does Singapore buck the trend and pay our cleaners such low wages even though we have such a high per capita national income which is on par with the Nordic countries (Chart 3)?

Why do we also pay our bus drivers such low wages, even though based on our per capita national income, Singapore should be paying our low-wage workers much higher wages (Chart 4)?

Perhaps what would put the nail in the coffin once and for all to the argument is when we look at the cost of living, as compared to the Nordic countries.

Yet, low-wage workers in Singapore are paid much lower wages than their counterparts in the Nordic countries. Cleaners in Finland earn 161% more than cleaners in Singapore. In Sweden, this is 358% more, 584% more in Norway and 588% in Denmark (Chart 6).

In other words, even though Singapore is more expensive than Finland, Sweden and Denmark, our cleaners earn a massive 62% lower than cleaners in Finland, 78% lower than Sweden and 85% lower than Denmark (Chart 7)! Yet, are cleaners expected to have a standard of living that is on par with the Nordic countries or even respectable by any standards? This is not forgetting that in the Nordic countries, the people are able to receive free healthcare and education – something which can be even considered a luxury for the low-wage workers in Singapore!

Wages and cost of living aside, we may also need to address the issues of very long working hour and poor working and living conditions, particularly of low-wage foreign workers in Singapore. For example, a company which won a top entrepreneur award was also one of two companies that were fined after the Ministry of Manpower (MOM) and Urban Redevelopment Authority (URA) found workers living in unacceptable conditions.

According to AsiaOne, “investigations revealed that the company had provided the accommodations to its subsidiary companies and sub-contractors while being aware that it had broken several rules, including overcrowding. The site was also operating illegally as a commercial dormitory and was using space that was not approved for accommodation purposes. (The company) has become the first company to be issued a $10,000 composition fine for abetting other companies in failing to provide acceptable accommodation.“

The chronic problem of low wages in Singapore is real. Very clearly, the significantly lower wages and higher prices in Singapore means that when compared to the Nordic countries, the purchasing power of Singaporeans is much diminished. The very simple question to ask is this – if prices are so sky-high in Singapore, and wages are rock-bottom, then what does it mean to the livelihoods of Singaporeans, whom many would have to scrape by to make ends meet?

The strikes and riots are only the beginnings of what is to come of the effects of the larger undercurrent of income inequality and unfair wages that are being paid to workers in Singapore, and if we choose to ignore the real causes – of low wages and oppressive work conditions – and attribute them to lesser factors, such as the overuse of alcohol, the denial of the root causes to the most massive industrial action and civil resistance in Singapore’s recent history will only result in further social unrest, as workers fight back against inequality, and oppressive and unfair treatment.

It is of no use to show statistics that may give the perception that wages are rising immensely, when they are actually not. And as long as the government does not take concrete actions to allow labour unions to be independent and allow them to engage in collective wage bargaining, and/or to implement a minimum wage, to increase the wages of workers in Singapore, Singaporeans can tell for themselves whether their pay has actually increased.

The strikes and riots are only symptomatic as to the larger social effects that will come, if the government doesn’t respond appropriately to the needs of Singaporeans and workers here. Further denial will indefinitely result in much larger social movements, which would undoubtedly overshadow the strike and riot, and the four major protests that have already been held in opposition to the Population White Paper and the Licensing Rule this year. Together, more than 10,000 Singaporeans have joined the protests this year. It wouldn’t be far-fetched to imagine that this figure would be easily overcome at next year’s protests or protests held closer to the next general election, at the rate that things are going.

Empowering Singaporeans had just organised our first workshop – Towards a Better Education System – last week. We will be holding the next workshop to discuss about the jobs, wages and employment situation in early 2014.