Excerpt from Parliamentary Debate on 22 March 1985:

The Prime Minister (Lee Kuan Yew): Yes, please. I have been waiting for the opportunity to give you the chance.

‘That a country big or small shall be great only if the spirit of the people is great.’

Mr Chiam See Tong: Now, after 25 years, I wonder whether the spirit of the people can be as great as the spirit which the PAP first had. I think it is a pity and it is a very sad thing that now we have to get people in –

Mr Chiam See Tong: – with attractive rewards. I really subscribe to this very great aim of the PAP when it first started and I hope it can still have this aim.

Does the Prime Minister believe that competition will increase efficiency? If he does, I think he should allow a fair competition between the Opposition and the PAP Members. I have been voted into Potong Pasir but I find that my hands are tied, The Sennett Estate Community Centre was suddenly taken away from me, used for some –

The Prime Minister: You are suggesting the Minister is corrupt?

Mr Chiam See Tong: No, no. I am talking about fair competition. Let us have a chance to work with the residents in our constituency.

The Chairman: We are talking about Ministers’ salaries.

The Prime Minister: We are talking about Ministers’ salaries.

Mr Chiam See Tong: We are talking about salaries and the type of society we want to maintain. If you want to get the Ministers to do well, you should not just pay them, but get them into competition. That is what I am saying. Yes, compete with us, increase their efficiency. I do not think you need just to pump money into them. Let us have competition. I think this will really increase efficiency, rather than just paying them double salaries, or whatever it is that is going to be proposed. Let us have good, friendly, competition. Let us have it. It is good for the nation. Let us work. Give us a chance at Potong Pasir. Appoint us to the RCs and CCs as advisers.

The Prime Minister: Wait till you become a Minister, then you will get to be in charge of everything.

Mr Chiam See Tong: The PAP Members are automatically appointed advisers. Why are we not? What are they afraid of? It is not necessary by pay alone. Let us have competition, increase their efficiency, give them a good cutting edge, as the Prime Minister used to say.

The Chairman: I do not understand what you are talking about.

Mr Jeyaretnam: Mr Speaker, Sir, the Prime Minister keeps talking about, “Let’s have a sense of proportion.” This is what I am trying to urge upon the Prime Minister, believe me, to have a sense of proportion. And I think you will get that if you compare the responsibilities and the duties of your office with the responsibilities and duties of office in other countries, and then begin to see what they are paid and what the Ministers are paid here.

The Prime Minister: The simple answer to that, Mr Speaker, is: if I were allowed to retire and then enlisted back into the service, I would be getting more. Simple,

Mr Jeyaretnam: I do not understand that.

The Prime Minister: Let me explain.

Mr Jeyaretnam: Please, do that.

The Prime Minister: My colleagues, with the exception of Mr Rajaratnam, the Minister for the Environment, who was a Lecturer in the University when he first joined us, and the Minister for Home Affairs, they would all walk back into better paid jobs. It is as simple as that. This is the quality of men we are looking for. I do not want to belabour this point. But I am looking for good men who can do the job. You can get any number of people to become Ministers. But can they discharge their obligations honourably, competently? If you want that quality of manpower, and those of us who have attended CPA meetings must know, you can compare and contrast. We know that the quality of the Members of Parliament has visibly risen and with it the quality of the Ministers. The two are related.

The Chairman: Mr Prime Minister, you have only two minutes left.

I think it will not be the last time it is said, but let me assure the House, nor will it be the last time I will belabour this point. You want this gyroscope to spin, even on the edge of the table, you keep the instrument clean, in fine condition, so that it will spin without friction. Any sense of distortion, authority and discretion has been exercised other than honestly, that is the end.

Come down to the #ReturnOurCPF 4 protest on 27 September 2014 at 4pm at Hong Lim Park. You can join the Facebook event page here. 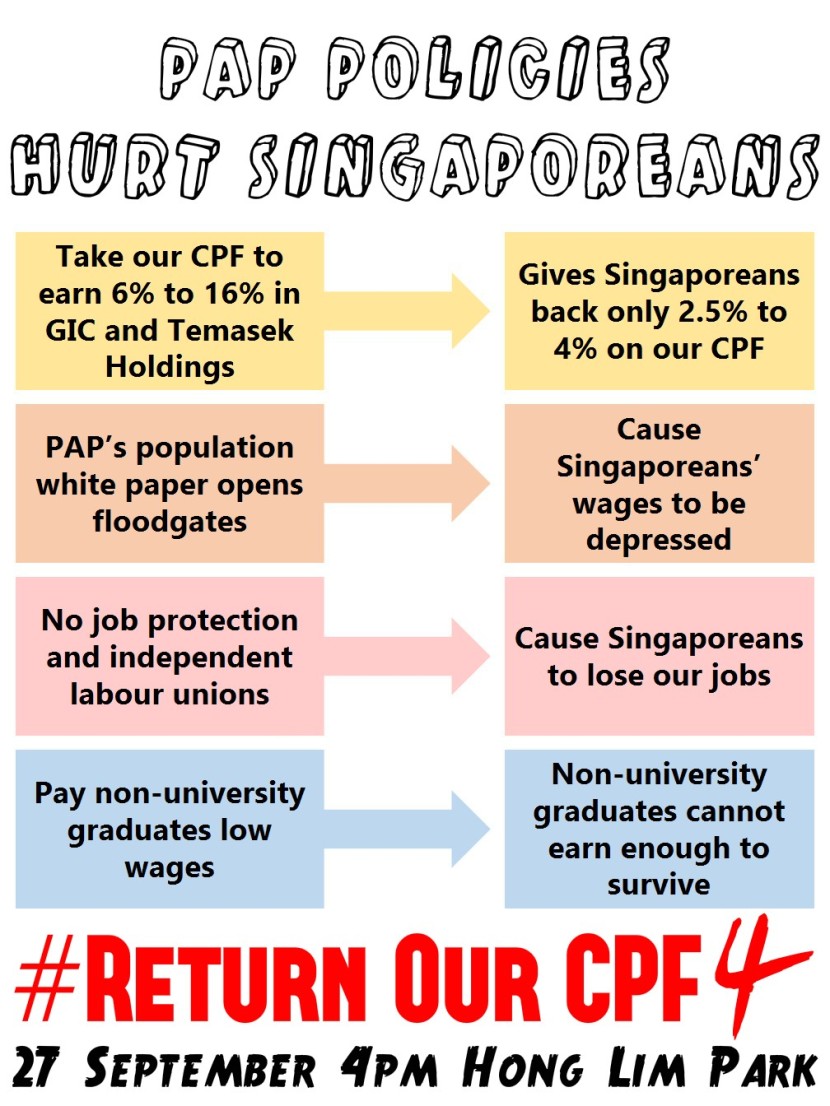