I have written the email below to the Singapore Police Force, AGC, the Ministry of Home Affairs and the Ministry of Law to ask for the release of Amos Yee and the two men who had protested outside the Istana. I call on everyone to send your own email to the Singapore Police Force at spf_feedback_unit@spf.gov.sg or use this email as a template to send, then screenshot and post it on your Facebook, or send it to me.

I write to you with regards to the two men had protested outside the Istana and who were arrested under the Public Order Act.

I would like to appeal to the Police to not charge the two men.

The constitution also says that “Parliament may by law impose … such restrictions as it considers necessary or expedient in the interest of the security of Singapore or any part thereof, public order.”

The Police said that the two men were arrested under the Public Order Act. Indeed, parliament only as recently as 2009 then passed the Public Order Act which is intended “for preserving public order and safety at special event areas and public places”.

The Act also says that, “Any individual or group who wishes to organise an assembly or procession to (a) demonstrate support for or opposition to the views or actions of any persons, group of persons or any government; (b) publicise a cause or campaign; or (c) mark or commemorate any event, must apply for a Police Permit.”

However, the perception of the police’s approval of such permits is that it is arbitrary. For example, last year, when the People’s Action Party (PAP) wanted to celebrate its 60th anniversary, several roads near the Victoria Theatre and Concert Hall were closed and the police were deployed. However, when the Worker’s Party wanted to celebrate its 50th anniversary at the East Coast Park in 2007, its application for a police permit was rejected.

Which is more likely to cause disorder? Arguably, the PAP’s event and the closure of the roads have led to even more public disturbance than an event at the park for families and children.

This has given Singaporeans the perception that the police’s application of the law is biased and unfair.

Whereas PAP-affiliated members are readily given permits to protest and allowed, such as with the Consumer Association of Singapore (CASE) outside the Parliament House, the same was not allowed for the Tak Boleh Tahan protest organised by the Singapore Democratic Party.

This has given Singaporeans the perception that the police would execute the law in favour of the PAP.

Recently, the police would arrest and charge Amos Yee – only a 16-year-old boy – within just 3 days but would finally act on Ed Ello only 3 months after police reports were made. Yet, for PAP member of parliament Lam Pin Min and PAP activist Jason Neo who had made similarly discriminatory remarks, they have still not been arrested or charged, Lam for 3 years now and Neo for 4 years.

Is the police required to be lenient to Lam because he is a PAP parliamentarian and more importantly, because he is from the PAP?

Singaporeans’ belief that the police has been acting unfairly and in a biased way is thus not uncalled for.

The police says that “it is the goal of the Singapore Police Force to make Singapore the safest country in the world”. You also say that your values are of “integrity” and “fairness”.

The police also says that your “core function is to protect the people who live in Singapore from crime and all manner of criminal harm”.

However, where prosecution has been arbitrarily applied and where it is clear that Singaporeans who are in opposition against the PAP are indefinitely more likely to be prosecuted, this questions the “integrity” and “fairness” of our police force.

Moreover, in what way has both Amos and the two men who had protested outside the Istana caused any “criminal harm” to Singaporeans. In fact, it can be argued that Amos has faced even more “criminal harm” onto himself, where even a PAP grassroots leader Jason Tan had said that he would “cut his dick and put in his mouth”, here being another example of a PAP-affiliated person who has not been prosecuted.

Also, for the two men who had protested, have their actions caused any “public disorder”. Clearly, they have not. The harm has now been done onto them, as they would be potentially turned criminals just for speaking up, as I have.

But am I calling for the prosecution of even more Singaporeans? No, I am not. If the law is unclear and arbitrary, then it is the responsibility of the citizenry to question its application and of the law itself, and this is why I am writing to you.

As a Singaporean citizen and a critically-thinking person, as I am sure you are as well, if the constitution allows for the freedom of speech and the right to peaceful assembly, what has these two men done wrong? Ironically, the two men have spoken up and said that the “subject of the protest (is for the) Freedom of Speech for Singaporeans”, as such they were trying to protect our constitution.

Perhaps our problem lies with the PAP having made it difficult for the opposition to run for elections and thereby allowing the PAP to monopolise government for the past 50 years, such that they have been able to enact laws that go against the interests of Singaporeans.

The PAP’s hypocrisy is blatant and we cannot stand and watch as the PAP continues to use differential standards to govern our country. The safety and security of our country is at stake if the rule of law can be so tenuously abused.

As if this is not bad enough, from the 1960s to 1980s, hundreds and thousands of Singaporeans who spoke up were also unjustly detained, some for more than 10, 20 or 30 years. Some of these Singaporeans wanted to create a better Singapore, some who fought for workers like you and I (before I lost my job).

If anything, the whole PAP parliament should be arrested and thrown into prison for their atrocities committed against Singaporeans.

As a citizen, I am severely disappointed in the Singapore Police Force and I believe that I speak for many Singaporeans in how the law has been unfairly and unjustly applied onto Singaporeans who have stood up and protected Singaporeans.

May I remind the Singapore Police Force, as a citizen of Singapore, that the police has a duty to carry out the law impartially and protect the rights of all Singaporeans. Where Singaporeans are wrongly prosecuted and where the PAP-affiliates are instead unjustly protected, severe injustice has now plagued our nation.

As the two men who have been protested said, “We are not anti LKY (Lee Kuan Yew). We take our hats off to him, and appreciate all that he has done for Singapore; giving his life in creating a “safe”, prosperous nation and environment for us to thrive in.

“However, for far too long, dissent has been dealt with very severely, and sometimes, downright inhumanely. We believe in Change, and correcting Injustice wherever we see it.”

I do not know the two men but they stand for precisely what the Singapore pledge says, that “We, the citizens of Singapore, pledge ourselves as one united people, regardless of race, language or religion, to build a democratic society based on justice and equality so as to achieve happiness, prosperity and progress for our nation.”

I call on the Singapore Police Force to let Amos Yee and the two men who have been arrested go. I would also like to point your attention to an online petition, where nearly 4,000 people (at the time of writing) have also asked for Amos to be released as well (https://www.change.org/p/the-government-of-singapore-release-amos-yee).

For the sake of our country and the future of our nation, we need to stand in solidarity with justice and to protect the people who live in our land. I look forward to the police making an independent and well-thought out decision to protect the lives of Singaporeans, to uphold our constitution and to bring about safety and peace to our nation. 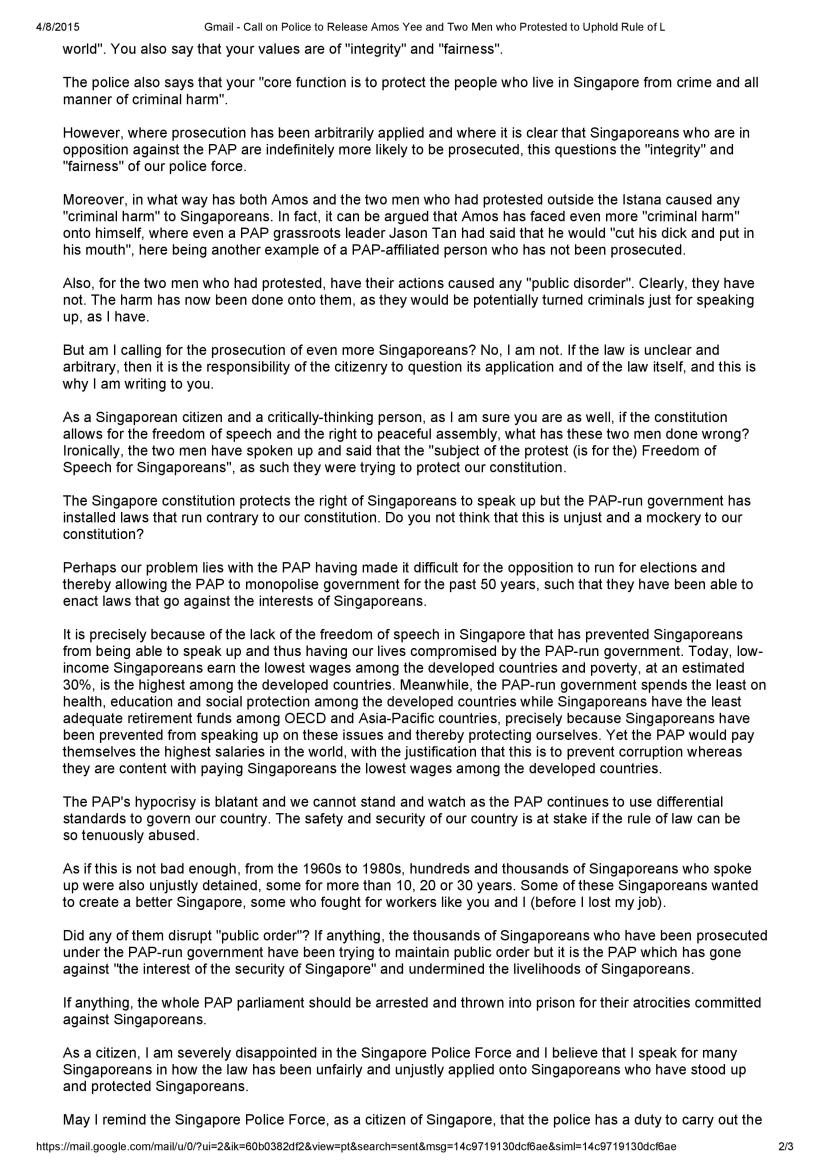