How much do you think ministers and members of parliament (MPs) earn, when compared to Singaporeans? Take this test.

And a last question.

Now, what did you answer and how does it compare with what is really happening in Singapore?

First, do you know that the lowest-paid Singaporean earns only S$1,000 a month? For cleaners, they earn a entry-level basic wage of S$1,000.

But actually, what the lowest-paid Singaporean earns is lower – many Singaporeans still earn below S$1,000.

For instance, last year, there were still 180,000 Singaporeans who still earned less than S$1,000 every month.

This means there were more than 30% of Singaporeans who were living on less than S$2,000 every month.

When I conducted a survey on my blog two years ago to ask Singaporeans how much in minimum wage they think Singapore needs to have, nearly 60% of the respondents said that the minimum wage should be S$10 or S$15. This would give an average of about S$2,000.

Today, Singapore still does not have a minimum wage, cleaners still earn only S$1,000 and 30% of Singaporeans still earn less than S$2,000.

Now, let’s take a look at how much you the MPs and prime minister actually earn, in comparison with the lowest-paid Singaporean.

As compared to the S$1,000 that cleaners earn, this mean that MPs are earning 15 times more than a cleaner, or 1,500% more! How does this compare with your answer above? 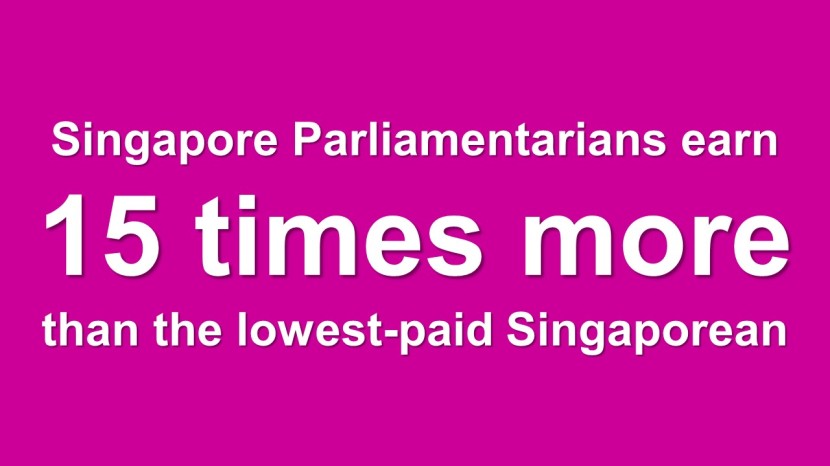 And how about the prime minister? He earns a stated salary of S$2.2 million, which is about S$183,000 every month.

And how does this compare to a cleaner who earns S$1,000?

This means that the prime minister actually earns 183 times more than a cleaner, or 18,300% more!

But do you think this is right?

Now, let’s compare this with another country which has a similar level of national income as Singapore – Norway.

It would only take 5 years for the lowest-paid Norwegian to earn what the Norwegian prime minister earns in one year.

But for the lowest-paid Singapore however, it would take him or her 272 years to earn what the Singapore prime minister earns in one year!

In fact, according to the Business Insider, what the Singapore prime minister earns is enough to cover the total of what the heads of states of the United States, Canada, Germany, South Africa, the United Kingdom, Japan, Turkey, France, Russia, Italy, Brazil and India earn, or a total population of more than 2.5 billion people.

In other words, the Singapore prime minister earns enough to govern the whole populations of China and India.

Or to look at it in another way, the Singapore prime minister actually earns enough to govern 35% of the population in the world.

The Singapore prime minister only governs 0.05% of the population the world.

But he earns a salary that can pay the leaders which govern 35% of the population in the world.

Do you think this is extravagant? Wasteful?

Do you think this is even right?

To put it into perspective, if the Singapore prime minister earns enough to govern 2.5 billion people but he is only governing 3.5 million Singaporeans, then proportionately, he should only be paid about S$3,100, which by the way is about the median income for Singaporeans.

(The S$3,100 is derived from dividing the S$2.2 million that the Singapore prime minister earns with the 2.5 billion people, and multiplying it with the 3.5 million Singaporeans.)

Not only that, do you know that the average earns one of the lowest wages among the highest-income countries?

In fact, the lowest-paid Singaporeans also earn the lowest wages among the highest-income countries.

This is even though the prime minister and ministers earn the highest salaries in the world.

Is this even right?

And finally, now that you also know how much the lowest-paid Norwegians earn and how much the PAP ministers and MPs earn,

I don’t think I need to say any much else, except that the PAP prime minister, ministers and members of parliament are paid TOO MUCH.

Not only that, they would keep increasing their own salaries to millions of dollars but would make Singaporeans earn one of the lowest salaries among the highest-income countries. And this is even though Singapore is the most expensive country in the world.

And then the PAP pays themselves the highest salaries in the world and the lowest tax among the developed countries.

Welcome to Singapore, my friends. And this, Singaporeans, if this does not wake you up, I do not know what else will.

The PAP obviously does not care about Singaporeans. In fact, the PAP does not treat itself as the government. It keeps taking the money of Singaporeans to use, but give very little back.

The PAP does not want to protect Singaporeans. This is the government that (some of) you voted for.

At the next general election, if you still vote in the PAP, then I don’t know what to say.